A growing number of Americans are moving into homes nestled between the idyllic beaches of the Florida Keys — part of a national trend that’s seeing coastal populations swell even as the seas swell dangerously around them.

That combination of rising populations and rising seas could see millions of Americans living in homes that flood regularly during the decades ahead, according to a nationwide analysis published Monday in the journal Nature Climate Change. 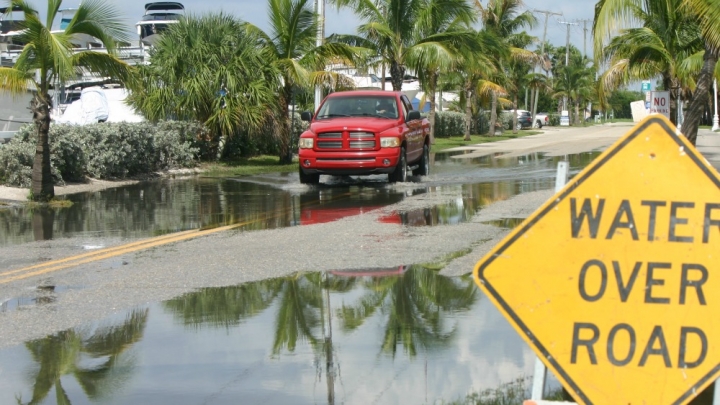 That’s unless steps are taken to protect homes, relocate populations or redirect development into regions with higher elevation as rising levels of greenhouse gas pollution continue warming the planet, which is causing the seas to rise.

In Florida’s Monroe County, home to Key West and other iconic tropical islands, more than half of the fast-growing permanent population could see their homes flood most days by century’s end, the analysis concluded.

Scientists combined local population trends with conservative projections for sea level rise to conclude that the homes of 4 million Americans would be inundated during high tides following 3 feet of sea level rise by 2100.

“Once you take into account growth of population, the numbers end up being two to three times more in terms of overall population that’s going to be impacted than if you just look at current populations,” said Stetson University landscape ecologist Jason Evans, who contributed to the study. “Florida really pops out.”

Preliminary steps for adapting to rising seas are already being taken in Monroe County and in some of the other vulnerable regions highlighted by the analysis.

If fossil fuel burning and deforestation continue at current rates, potentially leading to 6 feet of sea level rise by 2100, the researchers projected that the number of Americans living in homes that flood daily would jump to 13 million. 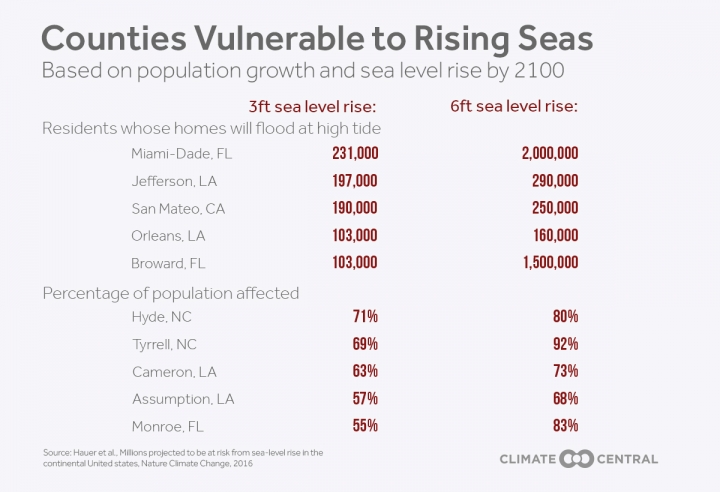 Other areas would also be impacted: California, New York and Louisiana alike would be home to about 1 million people apiece whose homes could flood at high tide in 2100 if seas rise by 6 feet.

The results are highly speculative. They assume that developers will continue building homes in coastal hubs the way they currently do and at current rates — even as seas rise around them. They also assume that residents will remain in their homes as flood waters rise.

“People may now be living in areas that will be inundated in 50 or 100 years — but we have time to react,” said Carolyn Kousky, a researcher at the nonprofit Resources for the Future, whose work focuses on climate adaptation. “Sea level rise is not an immediate impact. There is time to move and adapt.”

Nobody knows how American communities will be reshaped as flooding continues to become more routine. That made it impossible for the researchers to adjust population projections to account for sea level rise.

The findings reveal the vast scale of the dual problems of fast-rising populations in low-lying coastal areas affected by rising seas. They also show that the risks will be concentrated heavily in some population centers as Americans move to coastal cities in pursuit of sea changes in their lives.

The problems could be starkest in Miami-Dade County in Florida, where 231,000 residents could be living below the daily high-tide mark if seas rise 3 feet by 2100. That would be about 4 percent of the county’s population.

If seas rise 6 feet, the problem could affect nearly 2 million residents of the county in 2100 — more than a third of the people who are expected to live there.

In terms of percentage of population affected, Monroe County, which includes Key West and other islands, would be one of the hardest hit. If seas rise by 6 feet by 2100, the researchers project that 83 percent of its residents would endure daily flooding.

Hauer said it’s impossible to say how different communities will respond to rising seas, pointing out that tribal communities in Alaska and Louisiana are already being relocated from coastal areas afflicted with rapid erosion — a strategy called “managed retreat.” He said the costs of such solutions could rise substantially over time.

Coastal housing could also be adapted to cope with regularly inundation, such as by being built on stilts or developed in neighborhoods with higher elevations. Hauer pointed out that the population of Venice, Italy, continues to grow, despite inundation in some areas. 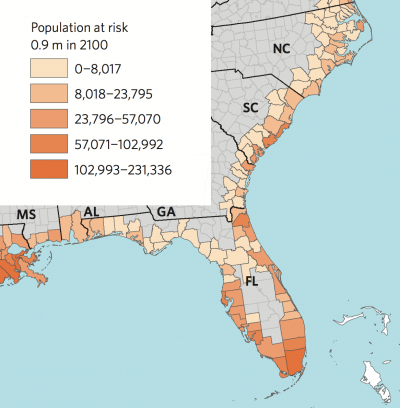 “If we look at something like a managed retreat and a growing population, then the populations we’re going to have to relocate are going to be bigger in the future,” Hauer said. “Finding suitable areas for them to move to could be problematic.”

Monroe and Miami-Dade aren’t just exemplars of dangers. They’re also providing examples of how other coastal American communities may begin to respond to rising instances of flooding.

Even as state and national political leaders in Florida downplay the hazards of global warming, local leaders are leading the nation in working to reduce the danger that is coming to define climate change in the Sunshine State.

“We’re definitely talking about it,” said Rhonda Haag, Monroe County’s sustainability director. “We’ve had a pretty heavy outreach initiative in the last year and a half.”

Sea level rise models are already being consulted whenever county buildings are planned in Monroe. A firehouse was recently built a foot and a half higher than originally planned to account for future sea level rise, adding about $150,000 in costs to the $3 million project, Haag said.

“When you spend a little bit of money upfront on the planning, you can save a lot in the long-run,” Haag said.

In 2014, a Miami-Dade sea level rise task force published what its chairman described as an “urgent, though optimistic, call to begin the step by step process needed to design and build a re-engineered urban infrastructure” capable of withstanding sea level rise.

“Make no mistake, it will be costly, but its costs are dwarfed by the potential human, physical and economic values at stake,” the chairman, County Clerk Harvey Ruvin, wrote in the introductory letter to the group’s report.

Such planning could help reduce the number of Americans impacted by rising seas during the decades to come, alleviating the severity of the dangers highlighted in Monday’s study.

“This analysis is useful in focusing on the very large number of people even in the U.S. who are at risk of climate change,” said Richard Black, a geography professor at the University of London who researchers migration and diasporas. He was not involved with the study. “But it tells us little new about how people will respond.”

You May Also Like:
February Blows Away Global Heat Record
The Fuel Behind Louisiana’s Torrential Rains, Floods