Coal production in the U.S. has dropped to its lowest level in 30 years thanks in part to low natural gas prices and climate policies encouraging utilities to switch to natural gas to generate electricity.

It was 1986 when coal production in the U.S. was as low as it is today, according to U.S. Energy Information Administration data released Friday. Coal is the largest single source of greenhouse gas emissions driving climate change. Burning natural gas to generate electricity emits about half as much carbon dioxide as burning coal. 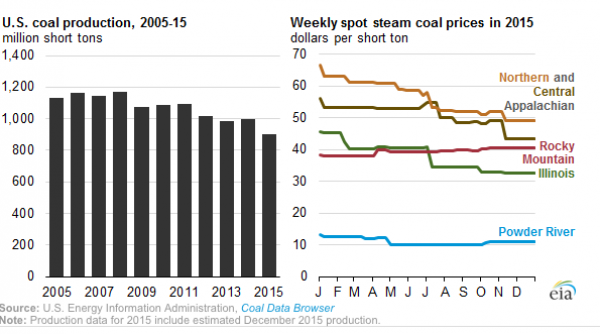 The Clean Power Plan is the biggest climate policy affecting coal production in the U.S. The plan took effect last year and is expected to cut 32 percent of carbon dioxide emissions from existing coal-fired power plants by 2030 compared to 2005 levels.

The EIA has not analyzed the final version of the Clean Power Plan to know how much it may be affecting the current decline in coal, agency analyst Brian Park said. An EIA analysis of the original proposal for the plan forecasted that, under the policy, coal would produce at least 25 percent of U.S. electricity through 2040. Today, 39 percent of U.S. electricity comes from coal.

Contributing to the decline of coal last year were natural gas prices that were nearly slashed in half in one year. The average daily natural gas price fell from $4.38 per million British thermal units in 2014 to $2.61 in 2015, according to the EIA.

The data show the decline in coal production hasn’t been felt evenly across the country, however.

Appalachian coal, produced mainly in West Virginia and Kentucky, was hit the hardest in 2015, falling 40 percent below the region’s annual production average between 2010 and 2014.

Other coal-producing regions were less hard hit, with production falling between 10 and 20 percent last year.