The Obama administration on Tuesday pulled back its plan to sell new oil and gas leases off the southeast U.S. coast, ceding to environmental concerns and continuing a trend among federal agencies to slow fossil fuels development in an era of climate change. 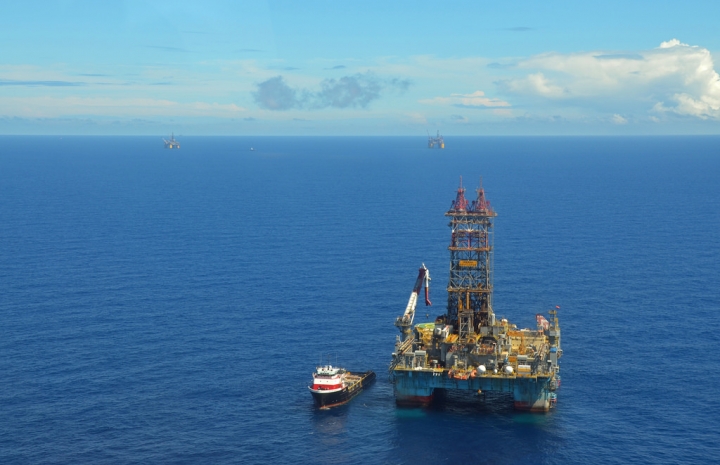 A drilling rig exploring for oil in the Gulf of Mexico.
Credit: JournoJen/flickr

U.S. Interior Secretary Sally Jewell said Tuesday that the decision not to lease Atlantic coastal waters was made because many coastal communities oppose oil drilling off their shorelines. The administration also wants to avoid conflicts with coastal tourism, fishing and U.S. Defense Department activity.

While specific climate goals did not play prominently in the decision to withhold leases in the Atlantic, the move follows other steps the Obama administration has taken in recent months to slow the development of U.S. fossil fuels

Last year, the administration refused TransCanada a permit to build the proposed Keystone XL pipeline from Alberta to Texas, and the Environmental Protection Agency finalized the Clean Power Plan, which would cut carbon emissions from coal-fired power plants. In January, the administration halted new coal leasing on public lands while it brings the federal coal leasing program in line with climate policy.

Michael Lazarus, leader of the Stockholm Environment Institute’s initiative on fossil fuel development and climate change, said slowing investment in offshore oil development in the Atlantic will help the U.S. meet its contribution to the Paris climate agreement and help keep global warming to below 2°C (3.6°F).

“Offshore platforms and infrastructure are major investments that, once built, are likely to continue producing, spurring added oil consumption and slowing the transition away from oil,” Lazarus said. 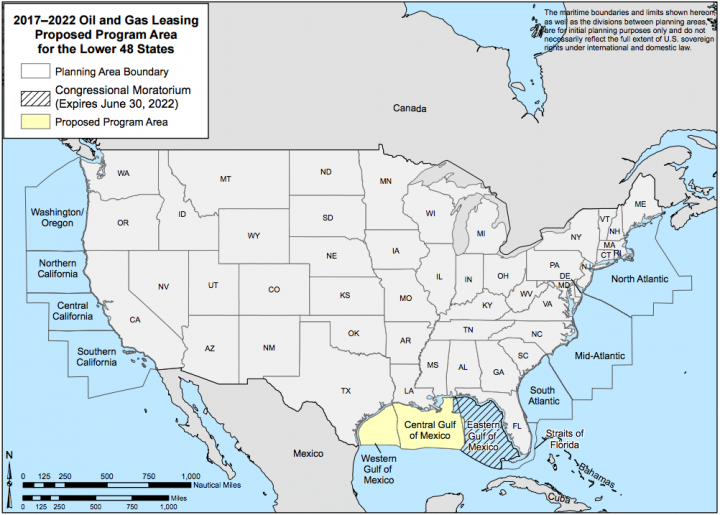 This map shows the boundaries of the areas of the outer continental shelf that the Obama administration had considered opening for offshore oil and gas leasing. The final plan only considers the Gulf of Mexico for new oil and gas lease sales.
Credit: Bureau of Ocean Energy Management

Climate scientists on Tuesday said the decision to keep the Atlantic coast off limits to oil drilling may mean little on a global scale, but many small decisions can add up to make a big difference in total greenhouse gas emissions.

“Climate change is the result of emitting tens of billions of tons of carbon dioxide each year for many decades,” said Ken Caldeira, an earth system scientist at the Carnegie Institution for Science in Stanford, Calif.  “While the signal of climate change avoided by keeping this oil and gas off the market will not be statistically detectable amid the noise of natural climate variability, that avoided climate change is real. With enough additional actions like this, the avoided climate change will be substantial and important.”

Though the Atlantic coast may not see oil and gas drilling for the foreseeable future, that may not be the case in Alaska and in the Gulf of Mexico.

The Interior Department is undecided about whether to open the Chukchi Sea, Beaufort Sea and the Cook Inlet in Alaska to new oil and gas leasing. Those areas, combined, harbor up to nearly 900 million barrels of oil and 1 trillion cubic feet of natural gas.

Jewell said the department is considering a range of options for leasing in Alaska, from no leasing to leasing in some waters while avoiding the most environmentally and culturally sensitive areas. 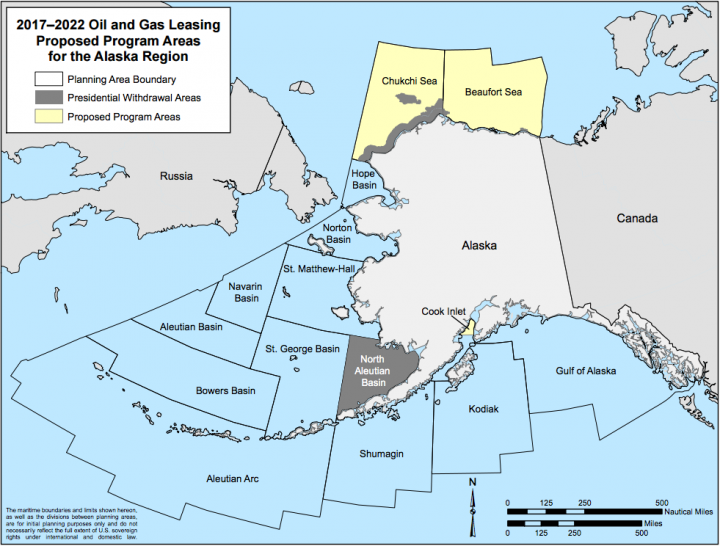 The areas of Alaska's coastline marked in yellow are being considered for offshore oil and gas leasing.
Credit: BOEM

In the Gulf of Mexico, the five-year plan calls for 10 oil and gas lease sales through 2022, continuing oil development there that has occurred for decades.

Jewell said the decision to keep the Atlantic coast closed to development could be reversed by the next presidential administration, which takes office in January.

“It certainly could be changed by a future administration and the whole five-year program could be replaced by a new one,” she said. “Congress could take action and force a new lease sale.”

Oil and gas industry and business boosters criticized Tuesday’s decision as a job killer for residents of the Southeast.

“America’s job creators have become accustomed to the relentless drumbeat of anti-energy policies from the Obama administration,” Karen Harbert, president of the U.S. Chamber of Commerce’s Institute for 21st Century Energy, said in a statement. “Today’s announcement that the waters off of our Atlantic coast will be excluded from the next offshore drilling plan is nevertheless remarkable for its catering to fringe constituencies at the expense of energy security and the American economy.”

Environmental groups hailed the decision, but criticized the five-year plan for being indecisive about Arctic oil development.

“By dropping the Atlantic from oil and gas leasing, the administration is standing up to big oil and protecting our coastal communities that rightly fear a BP-style disaster,” Natural Resources Defense Council president Rhea Suh said in a statement. “Next, the president should finish the job, honor his historic climate agenda and protect future generations by using his authority to permanently end the threat of drilling in the Atlantic and the Arctic.”

You May Also Like:
How a Monster El Niño Transforms the World’s Weather
U.S. Gasoline Use Slows With Uptick in Fuel Efficiency
Study: California Methane Leak Largest in U.S. History