‘Urgency of Climate Change’ to Debut as Legal Defense

As protests go, Ken Ward’s and Jay O’Hara’s daylong blockade of a coal delivery was low-key. There were no kerfuffles involving authorities and nobody was arrested — the men learned of criminal charges later by mail. But the duo’s trial, scheduled to begin Sept. 8 in a Massachusetts district court, is shaping up as a high-profile affair, featuring an unusual defense and planned testimony by some of the biggest names in climate science.

The men’s attorneys are planning to deploy a novel strategy. It’s called the necessity defense. They will argue that the urgency of climate change and greenhouse gas pollution was so great that their clients’ actions were legally justifiable. 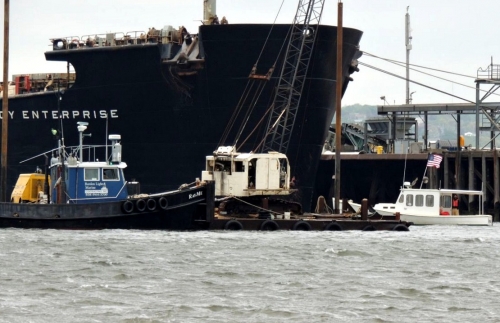 The trial’s outcome could have far-reaching implications, with fossil fuel blockades growing in popularity around the world as a form of climate-related protest. And the trial could grab national headlines. Former NASA climate scientist Jim Hansen and prolific climate writer Bill McKibben told Climate Central that they plan to testify in Ward’s and O’Hara’s defense.

The legal brouhaha was set in motion in the spring of 2013. Following an early-morning waterfront prayer in Newport, R.I., Ward and O’Hara navigated a lobster boat into a shipping channel, pulled close enough to shore to shout to supporters on land, and dropped an anchor weighing more than 200 pounds — one that was chained and locked to their vessel. They called local police. Coast Guard officers boarded their boat, inspected it, and remained on board as the hours ticked by and the sunny day became overcast and windy. The 690-foot Energy Enterprise idled along the shoreline, unable to deliver its payload of coal to a power plant in Somerset, Mass. Before dusk, threatened with tens of thousands of dollars worth of daily fines, Ward and O’Hara commissioned a salvage company to use a crane aboard a barge to lift the oversized anchor, then they motored to a marina in Fall River, Mass., and went home.

They are being charged with disturbing the peace, conspiracy, and boating offenses. They could face a few thousand dollars worth of fines and up to 5 years in prison if convicted. Their legal team, comprising a local defense attorney and a seasoned environmental lawyer, have come up with a plan to use threats that fossil fuels, and coal in particular, pose to the planet’s climate in their defense. The legal team says it will argue that the men acted out of necessity. (Prosecutors declined to comment because the case is pending.)

In attempting to use the necessity defense, the lawyers are veering from tradition. America is home to a long history of acts of civil disobedience — acts that that can help draw attention to a cause or an injustice. But such protestors normally admit that they committed crimes. Retired federal judge and Harvard Law School lecturer Nancy Gertner defended anti-nuclear protesters charged with trespass during the 24 years that she worked as a lawyer. They copped to their crimes, which they felt were justified. The difference here, she says, is that attorneys defending the lobster boat blockaders will argue that the necessity of the situation means that no crime was committed.

“The necessity defense is a defense that justifies a particular criminal act,” Gertner said. “You’re saying the harm created by the criminal act is outweighed by the harm to be avoided. It’s saying it isn’t a crime.” 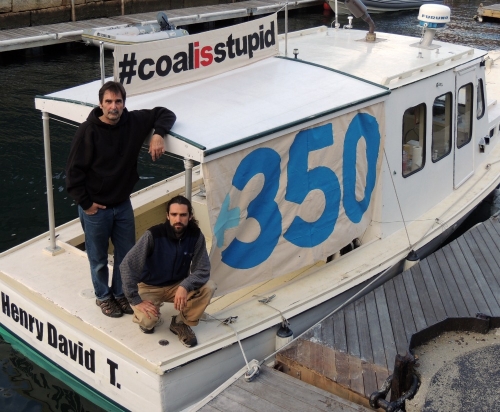 Somebody who breaks into a cabin to find food while lost and starving in the woods is a classic hypothetical example of an accused criminal who could use the necessity defense. A motorist who speeds to rush their wife to hospital before she gives birth might do the same.

Judges rarely allow the defense to be used in court, Gertner said. “It’s a defense that’s unusual — it’s not impossible, but certainly unusual.”

If the men’s attorneys do win in court using the necessity defense, “it would create a precedent,” Gertner said. “That’s probably something that would be in the judge’s mind. Would this enable people, or encourage people, to do other acts — to block coal shipments, or nat gas?”

One of the pair’s attorneys, Matthew Pawa, a litigator and trial attorney with extensive experience in environmental cases, agreed that victory for his clients could mean a “nice side benefit” for other activists charged with similar crimes.

“What they did was the right thing to do under the circumstances,” Pawa said. “If there is a threat that’s looming to property or life, to yourself or a loved one, or, in this case, to all of our loved ones, you can act in ways that would otherwise be considered criminally illegal.”

You May Also Like:
Coal Plants Lock in 300 Billion Tons of CO2 Emissions
A Tale of Two Cities: Miami, New York and Life on the Edge
Warming Puts Emperor Penguins at Risk of Extinction
The Bad News Continues to Flow About Antarctica’s Ice
Massive Iceberg Breaks off Pine Island Glacier in Antarctica
Soaring Temps in West Antarctica May Fuel Sea Level Rise