The much-anticipated release Thursday morning of President Trump’s budget outline offered big headlines — a $1.1 trillion spending plan with massive cuts to the EPA, the State Department and other agencies to help pay for increased spending on the military and border security — but it offered scant specifics on what might happen to funding for climate science research across key government agencies.

The proposed budgets for NASA and the National Oceanographic and Atmospheric Administration had mostly vague mentions of reduced funding for certain satellite programs and research grants. There was no mention at all of the budget for the National Science Foundation, another major research funder.

The budget blueprint leaves the climate science community in much the same limbo it has been in since the election, with concerns that major reductions in climate funding are in store, particularly given the rhetoric of Trump and his administration officials. 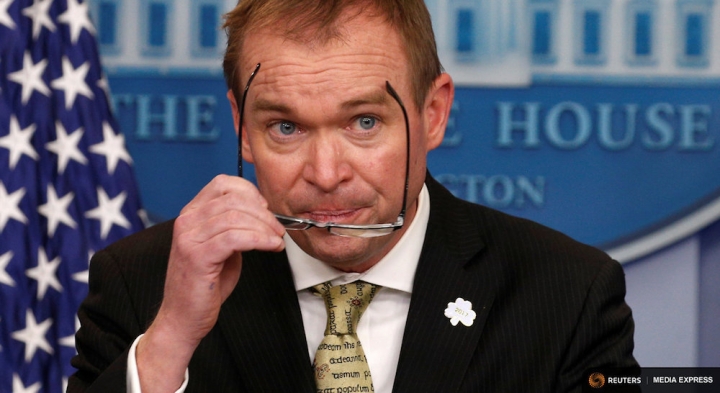 “We’re not spending money on that anymore. We consider that to be a waste of your money.” Office of Management and Budget director Mick Mulvaney said of climate science funding at Thursday afternoon’s press briefing.

Science funding as a whole makes up only 1 percent of the federal budget and has declined slightly since 2010, according to the American Geophysical Union.

More specifics on how the Trump administration wants to pare the budget will come with the fleshed out budget that is slated to be released later in the spring. Those cuts are only proposed ones, though, as Congress ultimately decides who gets what money, a process that will play out over the coming months and into summer.

“This is only the proposed [budget] and things can change a lot between now and when there’s a real budget,” Bill Gail, co-founder and CTO of the Global Weather Corporation and a former president of the American Meteorological Society, said. “We all have to be careful not to jump too high.”

Others, though, are gearing up to make the case for preserving climate science funding to officials in Congress.

“We are counting on Congress to realize that these kind of proposals are not a blue state or red state issue . . . to recognize that it would do really serious harm to us if they sustain this level of funding cuts,” Christine McEntee, executive director and CEO of the AGU, said.

The first inklings of potential impacts on climate science came when the Washington Post obtained a budget planning document two weeks ago that indicated NOAA’s satellite and research divisions could see their budgets slashed. The reports drew swift condemnation from meteorologists and climate scientists who warned that such cuts would significantly hamper efforts to improve weather forecasting and climate projections. Some saw it as targeted retaliation for some of the climate research NOAA has conducted.

The budget outline released Thursday, though, was more vague — the only specific  mentions were the zeroing out of coastal and marine management and research and the Sea Grant program, which provides funding for local communities for coastal resilience.

The outline said that the budget “maintains development” of two key satellite programs — the Joint Polar Satellite System and Geostationary Operational Environmental Satellite — because of their necessity in weather forecasting. The budget also “achieves annual savings” to Polar Follow On satellite program, according to the document. That program is tasked with developing the next polar satellites.

The vagueness leaves scientists and science advocates worried that those budget reductions could be substantial. “It’s very concerning,” McEntee said, citing the necessity of such satellites for giving advance warning of major storms, floods and drought, and other weather and climate issues that can have major economic impacts on farming, energy and infrastructure.

“Climate change is real and it’s happening,” McEntee said. “You can cut the budget but that’s not going to stop the impacts of climate change.”

Adding to the uncertainty around how climate science may fare under the Trump administration is the lack of any nominees to lead NASA and NOAA.

The budget made no mention at all of the National Science Foundation. The NSF is one of the main drivers of research and development in the U.S., an area where the country is already falling behind other nations, she said.

There were a few more specifics on cuts to climate programs within NASA. While the overall NASA budget only received a 1 percent proposed cut, Earth science saw a larger share of about 5 percent. That is in line with statements from Trump as well as Representative Lamar Smith, the chair of the House Committee on Science, Space and Technology.

While that is less than some feared, the budget does propose completely eliminating four Earth science missions that would enable scientists to better monitor various aspects of the climate system, from the distribution of carbon dioxide in the atmosphere to ocean health. 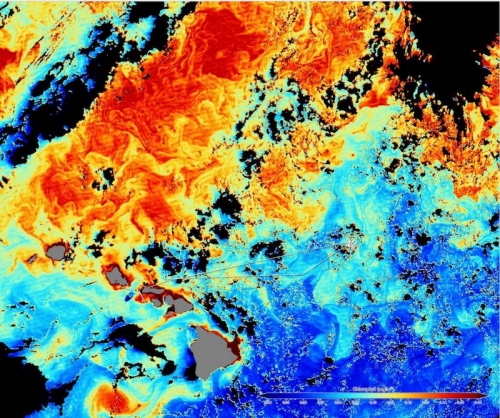 Concentrations of chlorophyll in the ocean, one of the measures of global ocean health that the Plankton, Aerosol, Cloud, ocean Ecosystem (PACE) mission — one of those proposed for termination in the budget — would monitor.
Click image to enlarge. Credit: NASA/Norman Kuring

The outline also said the budget “reduces funding for Earth science research grants,” though left out any specific amounts.

“We remain committed to studying our home planet and the universe, but are reshaping our focus within the resources available to us,” acting Administrator Robert Lightfoot said in a statement.

Scientists, however, remained concern by the proposed budget.

“Much of what we know about the most important planet in the solar system comes from NASA. Since we won't be living on other planets anytime soon, I want the best minds and technology monitoring our changes, too,” Marshall Shepherd, director of the atmospheric sciences program at the University of Georgia and another past AMS president, said in an email. Shepherd was also a research meteorologist with NASA.

The four missions proposed for the chopping blocks were all recommended by the National Research Council’s Decadal Survey, which pulls together experts to recommend priorities for science research to provide guidance to NASA, NOAA and the USGS on which missions and research to prioritize.

“Congress has a lot of respect for the decadal survey,” Gail, the Global Weather Corporation CTO, said, so whether they will agree with these proposed changes is uncertain.

McEntee emphasized the need to press Congress to preserve government science funding, as cuts in one year’s budget can have long-term reverberations; each year’s budget is set using the last one as a guide, creating a potential long-term funding shortfall.

“Government is one of our institutions that can take a long view rather than short-term quarterly earnings views,” she said. “Without taking that longer-term view we’re going to see mid- and long-term impacts that are going to be really hard to recover from.”