U.S. Corn Belt the Most Productive Region in the World?

NASA researchers have used a new satellite technique to pinpoint the most productive plant-growing regions in the world. For a few months every year, it turns out the U.S. Corn Belt has the most prolific plant growth on the planet, besting even the ever-green Amazon. The surprising discovery not only gives the Midwest a feather in its cap, it could also provide a major boost to crop forecasting in the regions of the world that will need it most. 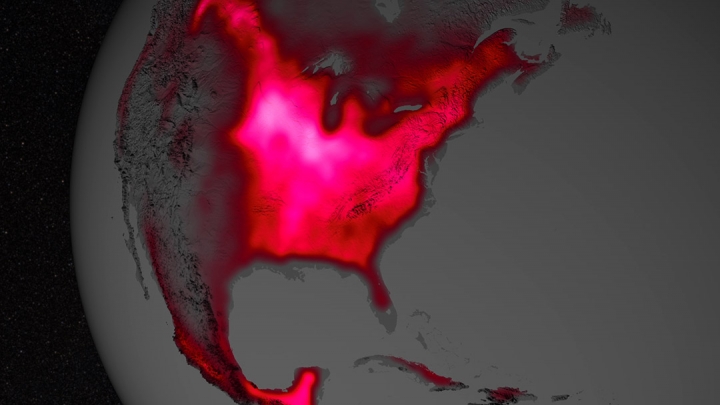 The magnitude of fluorescence portrayed in this visualization prompted researchers to take a closer look at the productivity of the U.S. Corn Belt. The glow represents fluorescence measured from land plants in early July, over a period from 2007 to 2011.
Click image to enlarge. Credit: NASA Goddard Space Flight Center

Researchers used a nifty trick to better understand productivity. Rather than looking at how green an area is, they examined its fluorescence. Chlorophyll is responsible for the greening of plants, but as it photosynthesizes incoming sunlight, it also emits a small fluorescent glow. That glow is invisible to the naked human eye, but it’s bright as day to satellites with specialized monitoring equipment.

Using ground measurements, scientists confirmed the method is a more accurate proxy for plant productivity than any other technique currently in use. It’s amazing to consider that satellites miles above the planet can detect what’s happening at the molecular level in plants.

The resulting analysis showed that when corn and soybean plants kick into high photosynthetic gear in July at the peak of growing season, they make the Midwest the most productive place on Earth. Previous techniques underestimated the region’s productivity by 40-60 percent. But the Corn Belt’s moment in the sun is brief. Plants there die in fall and fields lay fallow through winter. That’s why the Amazon retains the title of most productive region year-round.

But the research isn’t about crowning the globe’s top prolific growing regions.

“This can go a long way regarding monitoring – and maybe even predicting – regional crop yields,” Christian Frankenberg, an author of study from NASA's Jet Propulsion Laboratory, said in a press release.

Climate change is likely to make crop forecasting ever more important. As the latest report from the Intergovernmental Panel on Climate Change makes clear, food security will be a major concern in a warming world. Some areas in higher latitudes are already seeing increased crop production, but the report said negative impacts in other parts of the world are outweighing those gains.

As temperatures warm and rainfall patterns shift, it’s likely that crop yields will vary more from year-to-year. And even moderate warming of 1.8°-3.6°F would reduce corn and wheat yields, two staple crops, in the tropics. That would put a premium on any method that could help improve forecasts, especially in developing countries.

The IPCC noted that climate change will disproportionately affect people living in developing countries. In many of those countries, agriculture is one of the primary sources of income. Yet agriculture monitoring and crop forecasting is often less sophisticated than methods used in the U.S. and other developed countries due in part to a lack of data. Remote satellite sensing could help fill a major need in those data-poor areas.

You May Also Like
Tornado Season Is Here: Watches Out Across Mid-South
Tornado Technology Innovation Born From 1974 Tragedy
U.S. Lags Behind China in Renewables Investments
Mind the Fracking Data Gap, Study Says