Upgrading power grids, reducing greenhouse gas emissions and adapting to climate change are on the agenda for a new international working group composed of the three national energy ministers in the U.S., Canada and Mexico. 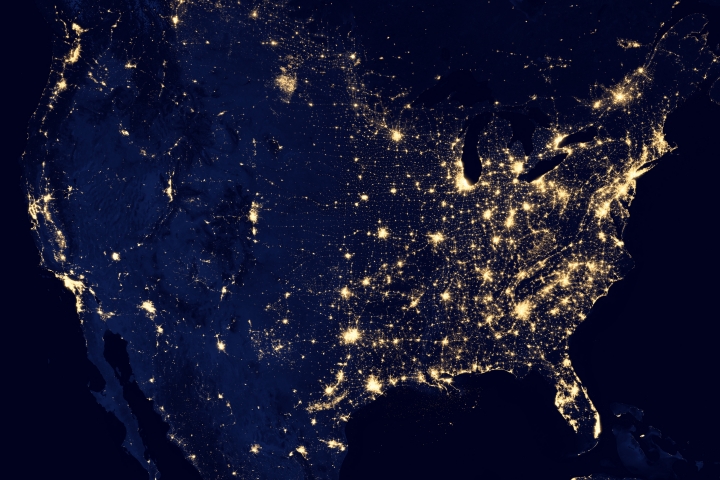 The U.S., Canada and northern Mexico seen at night from a satellite. The three countries are collaborating to reduce energy consumption and adapt to climate change. Credit: NASA

The announcement comes weeks after all three countries formally set their 2030 greenhouse gas emissions targets in the runup to international climate negotiations set to begin this December in Paris.

Over the next 15 years, Canada is aiming to slash its emissions by 30 percent below 2005 levels, while Mexico plans to cut its greenhouse gas emissions 22 percent below current levels. The U.S. is targeting a 28 percent emission cut compared to 2005 levels.

“North America has deeply integrated economies, abundant reserves, shared critical infrastructure and common values that underpin our long, productive history of collaboration,” Rickford said. “By cooperating with our North American partners, we are enhancing energy security and the environment while strengthening jobs and the economy.”

The working group is a step in the right direction, but it’s not a big leap toward North America doing its part to keep global warming below 2°C, or 3.6°F, Andrew Finn, an associate in the Canada Institute at the Woodrow Wilson Center, a nonpartisan global policy think tank, said. International negotiators have said that a rise beyond that level will mark the point at which climate change may become unacceptably dangerous.

“A lot of it is going to be a focus on new technology and grid efficiency,” Finn said, adding that sharing technology and best practices can be helpful in advancing clean energy and energy efficiency.

“Having these conversations is good and might set the groundwork for something more ambitious down the road,” he said.

You May Also Like:
Climate Change Will Greatly Impact Australians’ Health
The Surprising Link Between Fjords and Carbon
U.S. Hurricane Drought ‘A Matter of Luck’
America’s Future Has Wind in its Sails