For the third year running, the U.S. produced more crude oil and natural gas than any other country in the world in 2014. More oil than Saudi Arabia. More gas than Russia. And it’s happening at time when the U.S. is trying to take a leadership role in slashing greenhouse gas emissions to avert the worst consequences of climate change.

The U.S. is the Earth’s hydrocarbon production leader because of fracking, which has allowed shale oil fields in North Dakota, Texas and elsewhere to gush oil, and shale gas fields in Pennsylvania and other eastern states to produce ever more natural gas. The fracking boom allowed the U.S. to surpass Saudi Arabia as the world’s leading oil producer in 2013, and to surpass Russia as the leading natural gas producer in 2012, the year when the U.S. overtook Saudi Arabia as the world’s largest oil and gas producer. 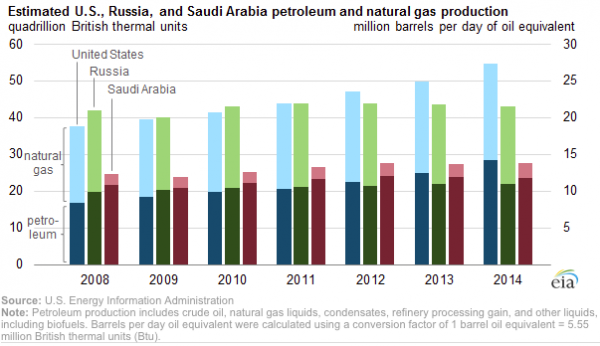 This graph shows how U.S. oil and natural gas production compares  to that of Russia and Saudi Arabia in recent years. Credit: EIA

The federal government’s new data released Tuesday reflecting the U.S.’s global leadership in both oil and gas production comes amid a backdrop of a changing climate, the Obama administration’s goal of slashing U.S. carbon dioxide emissions from burning fossil fuels, and the upcoming climate negotiations in Paris late this year that are aiming for an international agreement to cut greenhouse gas emissions.

At the same time, University of East Anglia researchers published a study in January showing that at least a third of all global crude oil reserves must remain untapped in the ground in order to avoid the internationally agreed upon limit of 2°C (3.6°F) of global warming. The world is currently on track to emit enough greenhouse gases by about 2040 to exceed that target, beyond which the risks of “dangerous” consequences of global warming escalate, scientists say.

The oil keeps coming, however.

The U.S. produced about 3.2 billion barrels of crude oil in 2014, up from 2.7 billion barrels in 2013. The last time the U.S. produced so much oil was in 1986. Production increased in 2014 despite oil prices that fell 50 percent as crude continued to gush from the Bakken shale oil fields of North Dakota and the Eagle Ford fields in Texas.

“Certainly, we believe that the tight oil and shale gas boom in the U.S. is the primary reason for the large increase in production over the last several years, including in 2014,” U.S. Energy Information Administration analyst Linda Doman said, adding that crude oil production in 2015 is sliding because of low oil prices.

“The fall in crude oil prices beginning in mid-2014 did not negatively impact U.S. oil production initially because most of the infrastructure and investment was already in place and productivity remained high,” she said.

Scientists say the implications of the U.S. role as both the globe’s leading hydrocarbon producer and a leader on cutting emissions to prevent the worst consequences of climate change are tough to reconcile.

“The issues related to oil emissions are complex ones because of the interactions between technology, markets and human behavior,” said Jon Koomey, research fellow at the Steyer-Taylor Center for Energy Policy and Finance at Stanford University. The Steyer-Taylor Center is focused on advancing the use of clean energy technologies. “It’s clear that the administration’s acceptance of the 2°C warming limit is incompatible with their often-stated all-of-the-above energy strategy.”

The White House has long used the term “all of the above” to refer to its policy of developing all forms of energy, including fossil fuels and renewables, in order to maintain a strong economy.

Koomey said the University of East Anglia study shows that at least a third of global oil reserves must remain unexploited in order to stabilize the climate.

Continued exploration for oil deep underground, such as fracked shale oil, or in remote areas where it’s difficult and energy-intensive to reach is incompatible with climate stabilization and will quickly erode the globe’s carbon budget — the amount of carbon humans have left to emit before 2°C of warming is inevitable, he said.

“The United States has been stepping up production of oil and gas, but has been reducing coal production,” Ken Caldeira, a climate scientist with the Carnegie Institution for Science in Stanford, Calif., said. “A major source of disagreement is whether the decrease in coal production justifies the increase in oil and gas production.”

“Every CO2 emission imposes damages (on) many people, including living far away many generations into the future,” Caldeira said. “I think it’s bad to be expanding industries that depend for their existence on dumping CO2 waste into the atmosphere. The fact that we are doing a little less bad when it comes to coal does not give us license to behave more badly when it comes to oil and natural gas.”

“Stabilizing the climate means not building things with smokestacks or tailpipes,” he said.

You May Also Like:
How Flood Insurance Could Drive Americans From Coasts
Index Shows Oil’s Climate Impacts Vary Widely
Two Months In and 2015 Is Record Warm
Public Lands May Be America’s Best Climate Defense