The U.S. will change the way it approaches international development projects, helping communities adapt to the climatic changes that its fossil fuel burning has helped to create. But experts question whether the new initiative, announced Tuesday, will be enough to help Bangladeshis who are suffering worsening floods, Pacific Islanders whose lands are sinking beneath rising seas, or any of a long list of other nationalities that are struggling with the effects of global warming.

Those experts say President Obama should focus on committing American money to a new climate adaptation fund set up during U.N. climate negotiations to help the developing world adapt to climate change.

“We recognize our role in creating this problem; we embrace our responsibility to combat it. We will do our part, and we will help developing nations do theirs,” President Obama said in his speech on Tuesday.

“The truth is that no matter what we do, some populations will still be at risk. Nations that contribute the least to climate change often stand to lose the most. That’s why, since I took office, the United States has expanded our direct adaptation assistance eightfold — and we’re going to do more. ”

President Obama’s remarks came at the U.N. Climate Summit, an event that brought together the world’s leaders to discuss their country’s commitments to address climate change. In addition to touting recent drops in greenhouse gas emissions and efforts to develop a plan to reduce emissions further ahead of major climate negotiations this December and next, President Obama announced an executive order requiring every international aid project the U.S. funds to incorporate climate resilience into planning and decision making.

“I’m announcing a new effort to deploy the unique scientific and technological capabilities of the United States, from climate data to early warning systems,” Obama said. “This effort includes a new partnership and will draw on the resources and expertise of our leading private sector companies and philanthropies to help vulnerable nations prepare for weather-related disasters and better plan for long-term threats like steadily rising seas.”

That means everything from sanitation to irrigation to health projects will have to consider any significant climate risks they face based on both past observations and future projections. The executive order notes that in addition to relying on advanced tools and data available in the U.S. from satellites and supercomputing power, observations and expertise in developing countries should also inform any decisions. 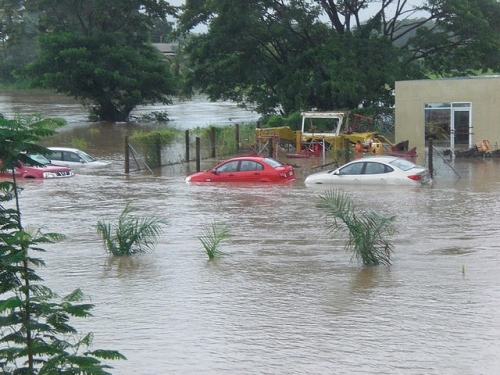 Lisa Goddard, director of the International Research for Climate and Society, said that making a concerted effort to provide the best available science as clearly as possible could help meet those goals.

“Today’s new executive order on resilience marks a step in the right direction. Nevertheless, without additional financial commitments, ultimately these actions will be a drop in the bucket when it comes to the United States’ responsibility to deliver on its obligations under the Copenhagen Accord,” said Raymond Offenheiser, President of Oxfam America, in a press release.

Those commitments are related to the Green Climate Fund, a pot of money conceived at  international negotiations in 2009 in Copenhagen to help fund adaptation projects in developing countries. Developing countries agreed to add $100 billion to it by 2020 with an interim goal of $14 billion by this year’s end. Following $1 billion pledge by France on Tuesday, the fund stood at only $2.2 billion to date, though.

Uncertainties in future climate projects could also reduce the efficacy of planning for specific impacts. Global temperatures are likely to continue rising into the next century even if greenhouse gas emissions are slowed as are rates of sea level rise and cyclone intensity. But specific local impacts and shifts in rainfall are less certain.

“We can’t just come in with our climate projections,” Goddard said. “The first questions anyone ever asks is what we should do with them. And until you have an understanding of how climate affects a particular sector and how those sectors work together, you can’t do much.”