In a year bookended by bitter cold snaps east of the Mississippi, it might come as a surprise to some that 2014 was actually quite a bit warmer than average in the U.S., making it the 18th year in a row with above-average temperatures.

Less of a surprise was the economic impact of the drought in the West, now on the brink of its fourth year. The drought was one of eight billion-dollar disasters to affect the U.S. in 2014 according to the National Climatic Data Center (NCDC), which released both sets of numbers on Thursday in its year-end assessment.

According to the NCDC, December was the second-warmest recorded in 121 years of recordkeeping. And not a single state had below-average temperatures. Overall, the U.S. was 4.5°F above the long-term average for the month.

The warm finish vaulted 2014 from near average to a warmer than average. The year was 0.5°F above normal, good for 34th-warmest year for the continental U.S.

“This fits within a context of a long-term warming trend here and around the globe,” Jake Crouch, a physical scientist at NCDC, said.

The U.S. hot streak is now officially old enough to vote for president as 2014 makes it 18 years of temperatures above the 20th century average. Of course, that’s nothing compared to the globe’s stretch of warm years, which is closer to a midlife crisis at 38 years old.

If December’s warmth provided a stepping stone to bumping up the U.S. average temperature, heat in the West has been the main pathway all year.

California had its hottest year on record, running 4.1°F above normal and shattering the record set in 1934 by 1.8°F. Arizona and Nevada also set heat records while six other states had a top 10 year. Those marks were reflected on a local level with 17 U.S. cities, all located in the West, setting records.

Alaska, which isn’t included in the contiguous U.S. average, also had its hottest year. In comparison, not a single state had its coldest year in 2014. Seven states down the middle of the nation had a top 10 cold finish, but Crouch said that the warmth in the West outweighed cold in the East in both area coverage and how much temperatures departed from the norm.

That heat was a major ingredient in driving drought in the West, one of eight billion-dollar disasters in the U.S. This was the third year in a row that drought has caused more than $1 billion in losses. It cost the U.S. $30 billion in 2012, $10 billion in 2013 and added to that misery in 2014, causing billions more in losses.

“California is always in headlines,” Adam Smith, an applied climatologist at NCDC, said. But other states such as Nevada, Texas and Oklahoma also felt the impacts of drought in 2014. 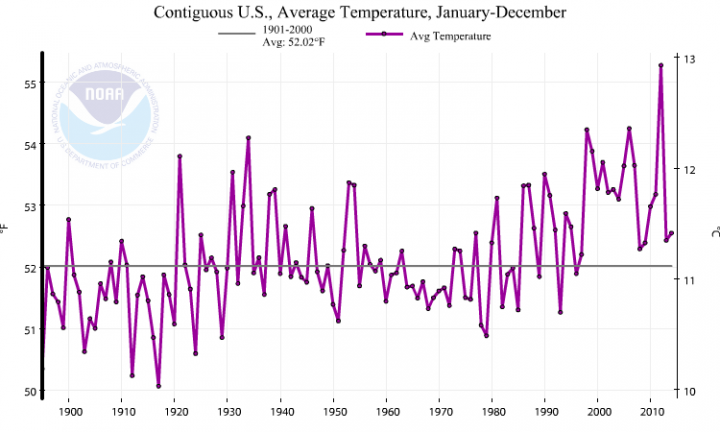 “The drought is a silent disaster, but the impacts are quite profound,” Smith said, listing agriculture, tourism and hydroelectric generation as the sectors that took the biggest hits.

Though 2014 was a quiet year for tornadoes, severe weather and tornado outbreaks caused five of the other billion-dollar disasters. Steve Bowen, a meteorologist who also compiles data on weather losses for re-insurer Aon Benfield, said that despite three years in a row of near-record low tornadoes, severe storms have cost the U.S. $15 billion or more annually since 2008. Tornadoes may be what garner views on YouTube, but hail and strong winds are what really drive losses.

In addition to severe weather, a major winter storm in early January and heavy rain in August that swamped Detroit and other parts of the Midwest round out the list of billion-dollar weather events.

The one catastrophe missing from the list? A hurricane. Though Hurricane Arthur made landfall in North Carolina as a Category 2 hurricane around the Fourth of July, it dampened fireworks displays but didn’t cause $1 billion in losses. Arthur was the first Category 2 storm to make landfall in the U.S. since 2008, but the historic major hurricane drought stretches back even longer to 2005.

“We’re really living on borrowed time, because the record-breaking nine-year streak without a Category 3+ landfall is going to end sooner than later,” Bowen said in an email.