U.S. greenhouse gas emissions declined 3.4 percent in 2012 from 2011, the Environmental Protection Agency announced Tuesday. Those emissions are down 10 percent from what they were in 2005, the EPA said, and are at their lowest levels since 1994.

Most of the decline came from reductions in energy consumption, increased fuel efficiency of cars and other types of transportation, and a shift to natural gas from coal in fueling power plants, the EPA said in a statement.

U.S. greenhouse gas emissions per year since 1990, broken down by type of gas.
Click image to enlarge. Credit: EPA

Whether the decline in emissions in the past few years is on  track to reach the pledge by the U.S. to reduce emissions by 17 percent compared to 2005 levels by 2020 is unclear.

“The decline that has been occurring the last few years could signal that emissions are turning downwards, however, they could also be the result of short-term fluctuations,” said climate scientist Bill Hare, CEO and managing director of Climate Analytics, a non-profit focused on climate research. (Hare’s group has said that pledge of 17 percent by the U.S. isn’t enough to reach the emissions reductions needed globally to avoid the worst effects of climate change.)

Carbon dioxide accounted for more than 80 percent of the greenhouse gas emissions, methane for nearly 9 percent, nitrous oxide for just more than 6 percent and other gases for smaller percentages. Most of the carbon dioxide came from the combustion of fossil fuels like coal and natural gas, while methane came mostly from livestock, decomposition of waste in landfills and natural gas systems.

A recent study found that methane emitted to the atmosphere through leaks in drilling systems were underestimated by the EPA. On a molecule-by-molecule basis, methane is a more potent greenhouse gas than carbon dioxide, but carbon dioxide is much more abundant in the atmosphere and is therefore the focus of most climate change mitigation efforts. Carbon dioxide passed the symbolic threshold of a concentration in the atmosphere of 400 parts per million for the first time last year. This year, it could surpass that mark for more than a month.

Electricity generation is the leading source of emissions in the U.S., with transportation coming in second.

The EPA has been compiling its Inventory of U.S. Greenhouse Gas Emissions and Sinks since 1990, and reports its findings to the Secretariat of the United Nations Framework Convention on Climate Change, as is required by countries who signed on to the convention. Since 1990, U.S. emissions have increased by 4.7 percent. 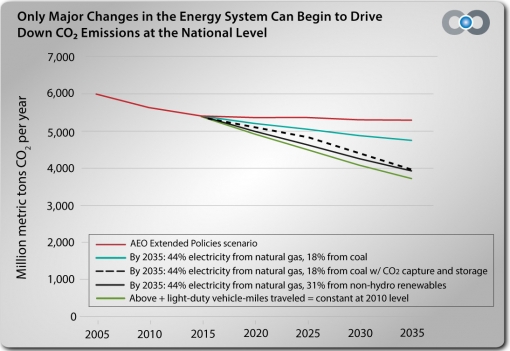 A Climate Central analysis of the American energy economy shows that the 10 percent reduction in annual carbon emissions in the U.S. since 2005 is unlikely to continue in the years ahead without major departures from the ways energy is currently produced and used.
Click image to enlarge. Credit: Climate Central

Greenhouse gases accumulating in the Earth’s atmosphere are the main driving force behind global warming.

Under President Barack Obama’s Climate Action Plan, the EPA has been directed to limit the greenhouse gas emissions from manmade sources, including new and existing coal-fired power plants.

Despite recent declines in emissions in the U.S. and in Europe, global emissions are still on the rise, largely because of developing economies like China’s, which are being powered by burning cheap, dirty fuels like coal. In the last part of its most recent assessment, the Intergovernmental Panel on Climate Change found that over the decade from 2000-2010 emissions reached their highest point in human history and rose at 2.2 percent per year compared with 0.4 percent per year in the previous three decades.

In order to keep warming under the 2°C (3.6°F) threshold agreed on by the world’s governments at a 2009 meeting in Copenhagen, global emissions will have to decline by 40 to 70 percent by 2050, the IPCC said in the most recent portion of its report, released Sunday.