The decline of the use of coal as the primary source of fuel for power plants across the nation is behind a drop in U.S. greenhouse gas emissions in 2012, the U.S. Environmental Protection Agency announced Wednesday.

But while both the EPA and the U.S. Energy Information Administration have announced that overall carbon dioxide and greenhouse gas emissions declined nationwide in 2012, hidden in the data is that some states, particularly those producing shale oil and gas, are seeing some increases in methane emissions, the most potent greenhouse gas. 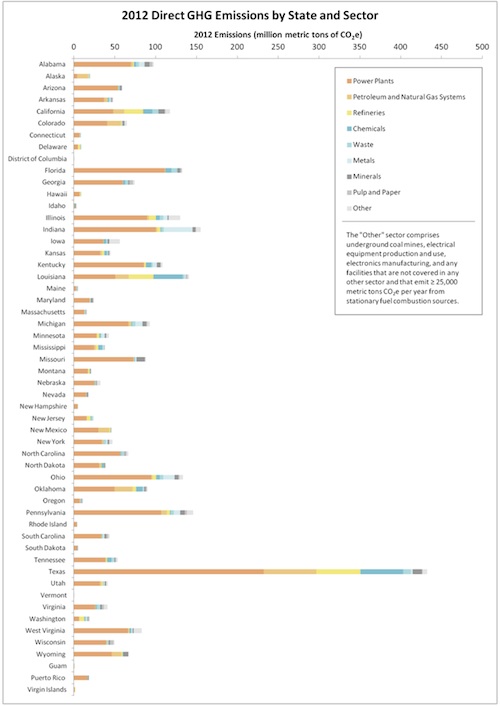 U.S. greenhouse gas emissions, including carbon dioxide, methane and other pollutants, dropped 4.5 percent from 2011 to 2012, according to the EPA’s data, which echoed an EIA report issued Monday showing a 3.8 percent decline in energy-related carbon dioxide emissions between 2011 and 2012.

The EPA’s 2-year-old Greenhouse Gas Reporting Program collects annual emissions data from about 8,000 industrial pollutant-emitting facilities nationwide. Since 2010, the program’s data have shown that GHG emissions from power plants have decreased 10 percent because natural gas is competing with coal as the nation’s primary fuel for electricity generation.

Leaks in the oil and gas drilling, production and distribution process are suspected to be a major source of methane emissions. However a study published in September and led by University of Texas chemical engineering professor David T. Allen found that methane emissions from some natural gas production sites were less common than expected, or in line with previous EPA estimates.

Texas, home to several major shale oil and gas plays and by far the nation’s biggest industrial air polluter, saw its methane emissions increase from 12.96 million tons to 13.41 million tons between 2011 and 2012.

Bucking the trend, Wyoming, a major producer of coal, oil and gas, saw its methane emissions decline while overall GHG emissions rose in 2012.

Every state is responsible for some share of the nation’s greenhouse gas emissions, but Texas emitted more greenhouse gases overall than the second and third most-polluting states combined last year.