Germany is the global leader in energy efficiency, and the U.S., with its ingrained car culture, is among the least energy efficient of the world’s largest economies.

That’s the conclusion of a new report released by the American Council for an Energy-Efficient Economy, which ranks the world’s 16 largest economies based on 31 different measurements of efficiency, including national energy savings targets, fuel economy standards for vehicles, efficiency standards for appliances, average vehicle mpg, and energy consumed per square foot of floor space in residential buildings, among other metrics. 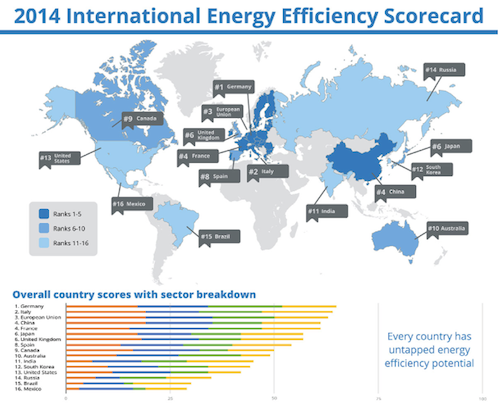 The ACEEE report ranked the U.S. 13th overall, with Germany, Italy, smaller European Union nations, France and China making up the top five most energy efficient economies in the world.

The U.S. was the 9th most energy-efficient economy in the ACEEE’s 2012 ranking, which criticized the country for focusing more on road construction than expanding public transportation.

Since then, the U.S. has made very little progress toward using energy more efficiently, the 2014 report says.

This year, the U.S. took a major hit for its lack of a national energy savings plan or national greenhouse gas reduction plan, and its ongoing resistance to public transit.

Americans drive more than 9,300 miles per year, more than citizens in any other major world economy, according to the report. Australians, ranking second-to-last for annual per-capita vehicle miles traveled, drive 6,368 miles per year. India tops the list, driving 85 miles per year per capita, followed by China with 513 miles per year. 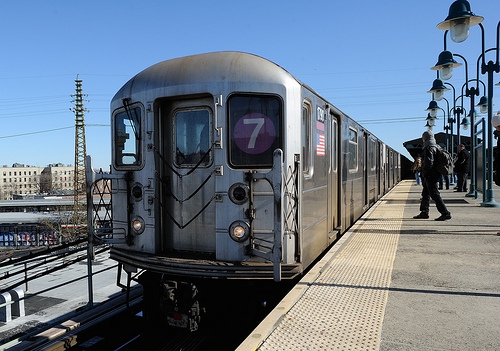 The U.S. took a hit in the ACEEE global energy efficiency survey because of Americans' resistance to using public transportation. This is a New York City subway train, the busiest subway system in the U.S.
Credit: Tim Adams/flickr

The ACEEE gave the U.S. credit for energy efficiency standards included in residential and commercial building codes in many states, but criticized the country for not having adequate national building standards in place.

Young said the U.S. may improve in the energy efficiency rankings if the Clean Power Plan is finalized because a state may be able to increase the efficiency of its power plants and buildings as ways to reduce carbon dioxide emissions from existing power plants.

“The rule could spur greater investment in energy efficiency throughout the country,” she said.

By contrast, Germany scored well in nearly every category in the survey, including spending on energy efficiency measures, aggressive building codes, and the country’s tax credit and loan programs.

Germany has set a national target of a 20 percent reduction in primary energy consumption below 2008 levels by 2020 and 50 percent by 2050.

The U.S. is one of only two countries in the survey with no national energy savings plan or greenhouse gas emissions reduction plan.