Two Months In and 2015 Is Record Warm

We may only be two months into 2015, but already the year is burning up the charts, setting up the possibility that it could topple 2014’s newly minted record for hottest year.

Together, January and February were the warmest such period on record, according to global data released Wednesday by the National Oceanic and Atmospheric Administration. With an El Niño (albeit a weak one) in place, there’s potential for that warmth to stick around and elevate temperatures for more of the year. 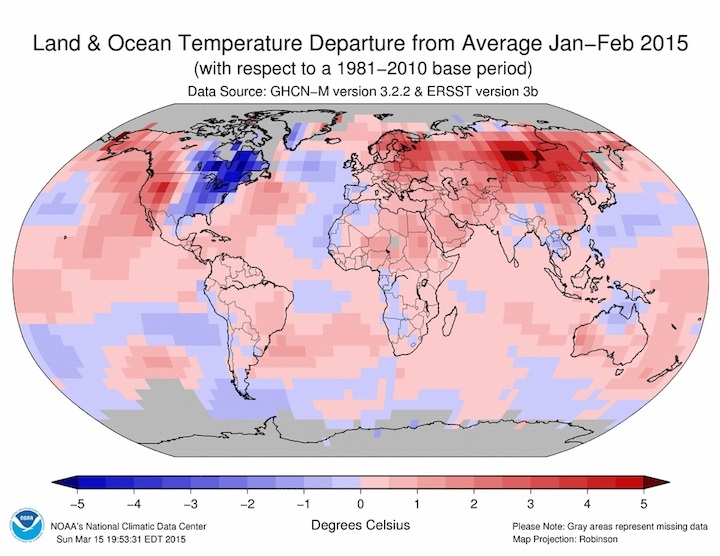 How much temperatures around the globe differed from average during the first two months of 2015.
Credit: NOAA NCDC

Of course, two months is only a small portion of the year, and it’s impossible to say for sure how the remainder will turn out. But regardless of its final ranking, 2015 will almost certainly be much warmer than most years in the records (which stretch back to 1880), thanks to the steady rise in global temperatures fueled by the unabated release of greenhouse gases into the atmosphere.

January 2015 was the second warmest in NOAA records, as was February as the month checked in at about 1.5°F warmer than the 20th century average for the month. Combined, the first two months of the year were 1.42°F above average and nearly half a degree above the same point last year. February 2014 ranked only as the 21st warmest for the month.

“So we are much warmer for the year to date this year compared with last,” Jessica Blunden, a climate scientist with ERT, Inc., at NOAA’s National Climatic Data Center, said in an email.

(NASA’s temperature rankings put February in the No. 2 spot and January tied for fourth. The rankings differ because each agency uses slightly different methods to process data.)

As was the case for much of last year, the eastern U.S. was the only very cold spot on the planet this winter, with many more areas of abnormal warmth. In particular, the western half of the U.S. was a hot spot, as was a large swath of Russia and parts of Scandinavia.

This pattern was a shift from much of last year, when the most sweltering spots were over parts of the oceans, particularly in the Pacific and Indian basins.

“The ocean heat does appear to be tapering off a bit overall compared with summer/fall last year, but we're still seeing record-warm temperatures in many regions, including, of course, the eastern North Pacific, which appears to have had a big influence over our weather in the US,” Blunden said.

Ocean water has a long “memory” for heat, as more energy must be absorbed or released to change its temperature than is the case for air. That ocean heat helped propel 2014 to the top of the standings and will continue to play a role in 2015. Of the past 12 months, nine of them have been the warmest or second warmest for that particular month, NOAA said in its latest data release.

The El Niño that NOAA has declared to have started in February could also keep temperatures elevated, as historically the climate state is associated with higher global temperatures.

“So if El Niño holds, and especially if it strengthens, we could very well be looking at another record warm year,” Blunden said.

Regardless of whether 2015 bests 2014 or comes up short, it is part of the larger, decades-long warming trend fueled by growth of carbon dioxide and other heat-trapping gases released by human activity. Nine of the 10 warmest years in the books have occurred in the 21st century, and no record cold year has been set since 1911.

Editor's note: This story was updated to reflect February 2014 was the 21st warmest, and not 44th.

You May Also Like:
California, Quebec Teaming Up On Climate Change
Cities Could Be Ideal for Utility-Scale Solar Plants
Include Climate Change in Disaster Planning, FEMA Says
Climate Change on International Disaster Talks Agenda