The big weather story this week was, of course, the unseasonably cool air that washed over much of the eastern half of the U.S. (whether or not it was related to the polar vortex). But cold air is kind of hard to photograph, so we’ve rounded up some other stunning shots taken of various weather phenomena to send you off into the weekend. Enjoy!

Because we clearly can’t get enough images of cool space weather, we’ve got another great photo this week from our favorite astronaut photographer and tweeter, Reid Wiseman. Wiseman, from his perch on the International Space Station, got a spectacular picture of the aurora australis (that’s the Southern Lights, or the aurora at the South Pole). Aurora’s are created when charged particles spewed out by the sun are funneled by Earth’s magnetic field toward the planet’s poles. The solar particles collide with other particles in the Earth’s atmosphere and give off the ethereal green and red colors of the dancing aurora. Even cooler than the still shot from Wiseman is the Vine he tweeted showing a time-lapse of the aurora from the ISS. Mesmerizing.

The southern #Aurora came out and flew with us for a bit. pic.twitter.com/ktlnVG97YX

The other big weather story of the week was probably Typhoon Rammasun, which kept defying model forecasts and intensifying more than expected. It kept gaining strength as it hit the Philippines as a typhoon, dumping up to 13 inches of rain, then when it emerged into the South China Sea, it regrouped and reached Super Typhoon status. It was the equivalent of a borderline Category 4/5 hurricane when it slammed into China’s Hainan Island. Meteorologist Brian McNoldy tweeted a satellite photo with an eerie close-up view of the typhoon’s clear eye (a mark of the storm’s strength).

Another beautiful yet ominous satellite image of #Rammasun from just before landfall. pic.twitter.com/r2diAyl6NM

The Arctic Is Burning

While not quite weather, this certainly relates to the changes in Earth’s climate. The arresting aerial photo was taken of the Birch Creek Fire complex in Canada’s Northwest Territories. The fire, just one of 156 fires currently burning in the area, had seared 250,000 acres as of July 16. The number of fires in the area is well above the usual average and the increase is tied, in part, to the rapidly warming temperatures in the Arctic region. The wildfires in turn release carbon stored in the boreal forests, which then traps more heat in a vicious feedback cycle. 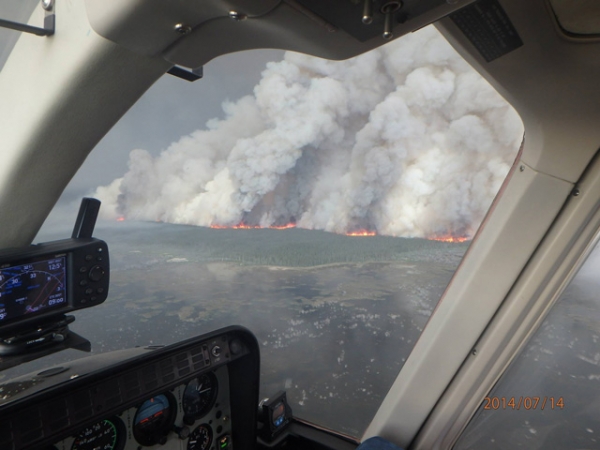 An aerial view of the Birch Creek Fire complex, which seared 250,000 acres as of Wednesday.
Credit: NWTFire/Facebook

These would be quite a sight to see while vacationing in the Mediterranean. These twin waterspouts were spawned off the coast of Greece, just two of many such spouts seen off the coasts of Greece and Italy this week, the Capital Weather Gang reported. The blog noted that this is apparently a time of year ripe for such waterspouts there, usually ones that rank F-0 to F-2 on the Fujita scale. Waterspouts are just what they look like: tornadoes over water. These tornadoes are not produced by the supercell thunderstorms that spawn the monster tornadoes that rake Tornado Alley in the U.S. Waterspouts are also frequent along the coast of the Southeast U.S.

Weather Channel meteorologist Stu Ostro tweeted a pretty cool pair of pictures of so-called wave clouds over Colorado, one taken from the MODIS instrument aboard one of NASA’s satellites, the other taken by him from the window of the plane he was traveling in. Wave clouds form where dry and moist air masses collide, sending the moist air up over the dry air and starting a wave. At the peaks of the wave, the air cools and water condenses out, while the air warms at the troughs so that no clouds form. The pattern repeats with each peak and trough.

Wave #clouds yest pm over SE #Colorado from MODIS #satellite at altitude of 438 mi & my window seat at 38K' pic.twitter.com/FrVgQ875ba