It’s a choice that will dramatically reshape U.S. policy on a host of issues from immigration to trade to foreign policy. And then there’s climate change. 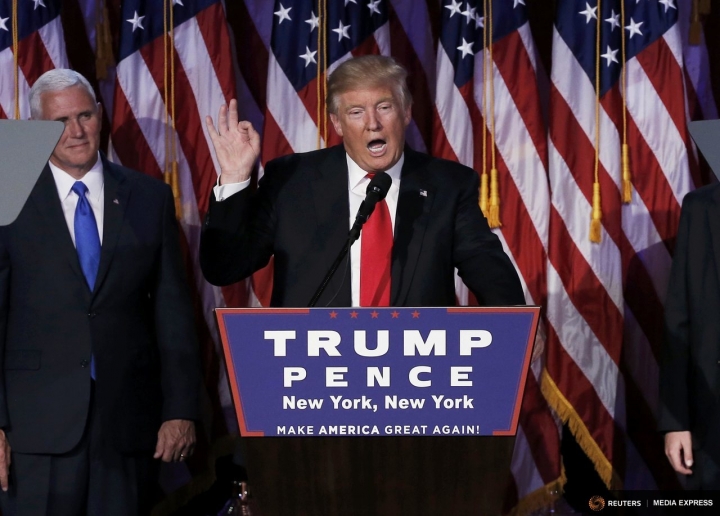 During the eight years of the Obama administration, the U.S. made incremental moves toward curtailing carbon emissions in the U.S. in the form of the Clean Power Plan and worked with the world’s governments to create a new international agreement. The bulk of those moves were made using executive orders because of Congressional Republicans committed to blocking any climate legislation.

While using executive orders helped the U.S. take steps on climate, it also means that the next president can take steps backwards. And Donald Trump is poised to do just that and more if his campaign promises are any indication.

Trump has openly denied climate change (infamously calling it a Chinese hoax) and said that Obama’s view of climate change as the world’s most pressing issue is “one of the dumbest statements I've ever heard in politics.” He has also come out as pro-coal and promised to “unleash an energy revolution” that doesn’t mention renewables.

Over the course of the election, Trump called for a number of actions that would directly harm the climate and have long-lasting repercussions. Among those are killing the Clean Power Plan, taking the U.S. out of the Paris Agreement, appointing a climate denialist to head the Environmental Protection Agency and an oil and gas executive to head the Energy Department, and cutting all federal climate funding.

According to Lux Research, an energy analytics firm, Trump’s energy plan would emit 3.4 billion more tons of carbon than Clinton’s proposals. That’s bad news at a time when the world needs to be looking to make deeper cuts in carbon pollution to avoid catastrophic climate change. 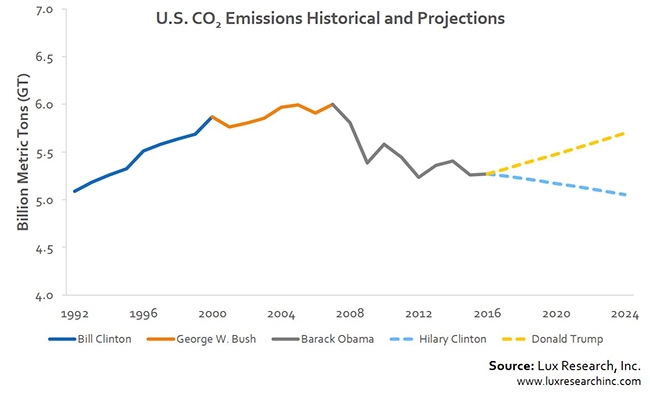 “It is quite possible that a Trump administration will spell devastation for environmental and climate regulation in the U.S., and to the public health and well-being of people, ecosystems and biodiversity around the world,” said Michael Burger, the executive director of the Sabin Center for Climate Change Law. “It is also possible that it won't. Let's hope that the responsibility of the office takes hold, and his obligations to current and future generations register once he has power.”

Even if Trump’s campaign rhetoric turns out to be just that, Republicans still control the Senate and House. And they have been steadfast in stymying most climate and environmental legislation. But what we’ve heard from Trump so far indicates that his policies will likely line up with the anti-climate views that have been the norm in Congress for the past eight years. Based on his statements and policy proposals, this is what could unfold under the next four years of his presidency.

The Clean Power Plan could be wiped out

During a May 2016 speech, Trump said rescinding the Clean Power Plan would be a priority in his first 100 days in office. He might have to wait a little longer, though, as the plan is currently tied up in court.

“Trump does not have to prioritize undoing the Clean Power Plan because it won't be in effect for at least several months, if not longer, even much longer,” Burger said.

The U.S. could back out of the Paris Agreement

Trump has said he will “cancel” the Paris Agreement. While he can’t cancel it for the rest of the world, he can pull the U.S. out of it through a couple of avenues or ignore it, undermining the whole agreement.Of course other countries could step up to fill the power vacuum if this happens, something that may already be happening.

“There are now other major emitting countries in addition to the U.S. — India, China and other G20 countries — that are playing a leadership role on climate with their commitments and actions to reduce emissions,” Erika Rosenthal, a lawyer with EarthJustice who closely monitors international climate talks, said.

While it remains to be seen who exactly Trump appoints (and who gets confirmed for that matter), frontrunners for Trump’s cabinet and agency administrators are not good news for the climate.

According to Politico, Harold Hamm is the leading candidate to head the Energy Department. Hamm runs Continental Energy, a large oil and gas company that has heavy interests in fracking, and has advised Trump on energy.

During his speech at the Republican National Convention in July, this is what Hamm had to say about energy: “We can double U.S. oil production again and put America in a global league of its own.” (He also said “climate change isn’t our biggest problem” during that speech but at least there’s hope he might view it as a problem)

One person who has talked about climate change is Myron Ebell, a director at the conservative think tank Competitive Enterprise Institute. Ebell is a top candidate to head the EPA. He’s also a climate denialist. Tasking him with the agency in charge of a number of climate regulations, including the Clean Power Plan, could drastically alter the landscape for how climate is addressed nationally.

Trump has said he will “cancel all wasteful climate change spending,” claiming it will amount to $100 billion in savings over eight years. According to Bloomberg BNA, this is how the Trump campaign arrived at that number:

“The figure combined an estimate of what the Obama administration had spent on climate-related programs, the amount of U.S. contributions to an international climate fund that Trump would cancel, and a calculation of what Trump believes would be savings to the economy if Obama’s and Clinton’s climate policies were reversed.”

You May Also Like:
Toasty October Keeps U.S. on Track for 2nd-Hottest Year
‘Critical Moment’ as UN Climate Talks Resume
The World Isn’t Doing Enough to Slow Climate Change
Here’s How Much CO2 Will Make the Arctic Ice-Free