Energy Star, the program that certifies toasters, air conditioners, computers and buildings for energy efficiency, could be killed by the Trump administration as part of its effort to shrink federal spending.

The administration wants the program to be “zeroed out” in the 2018 Environmental Protection Agency budget, according to news reports and a memo that the EPA provided to the National Association of Clean Air Agencies last week. The EPA declined to comment. 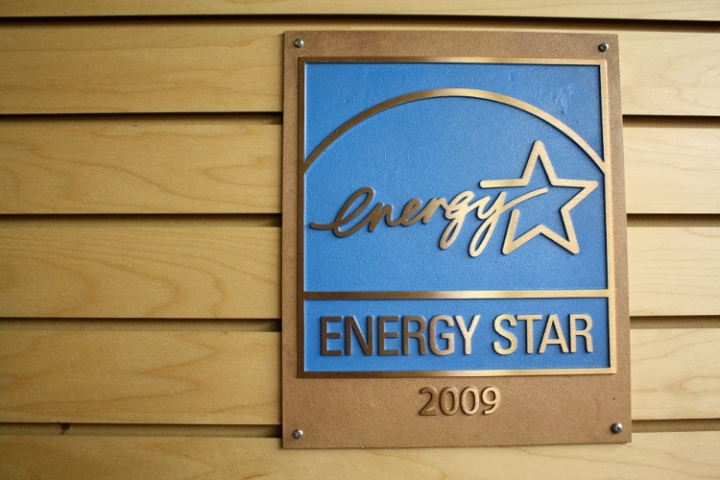 The program is just as much about saving consumers money and cutting air pollution as it is reducing the carbon footprint of everyday household electric appliances. One of the most widely recognized and commonplace federal environmental programs, Energy Star saves consumers millions of dollars in annual energy costs and cuts U.S. greenhouse gas emissions by millions of tons annually, according to the EPA.

“The Energy Star program provides a label indicating that a product has been verified by the EPA to be a high-efficiency product,” said Kenneth Gillingham, an economics professor at Yale University. “This in general leads to more efficient products than otherwise, which usually means less electricity use and fewer greenhouse gas emissions.”

Trump has promised a renaissance for the oil, gas and coal industries and a broad rollback of federal environmental programs, focusing on those that address climate change by cutting U.S. greenhouse gas emissions.

But the Energy Star program isn’t primarily a climate program. Established in 1992 under the George H.W. Bush administration, the program’s original goal was to help reduce air pollution by encouraging companies to voluntarily manufacture appliances that are more energy efficient. Congress modified Energy Star’s mission in 2005, requiring it to promote energy efficiency in products and buildings to reduce energy use and improve energy efficiency.

The EPA, working jointly with the U.S. Department of Energy, tests and then certifies appliances, homes and commercial buildings for meeting specific energy efficiency requirements. Meeting the standards and participation in Energy Star are voluntary. Each certified building or appliance earns a blue Energy Star label, which companies often use in marketing their products.

The Obama administration started promoting Energy Star’s climate benefits, saying the program stopped 2.2 billion metric tons of carbon pollution from reaching the atmosphere between 1992 and 2013 and 283 million tons in 2014. That’s a tiny fraction of total U.S. emissions, which tallied up to about 6.8 billion tons in 2014 alone, according to EPA data.

The EPA estimated in its most recent Energy Star annual report that the program generated more than $31 billion in annual energy cost savings benefits in 2014 and cut about 5 percent of total U.S. electricity demand that year.

“Energy efficiency has a very important role to play in the decarbonization of the electricity grid,” said Sebastien Houde, an economics professor at the University of Maryland-College Park, whose research has focused on the Energy Star program. 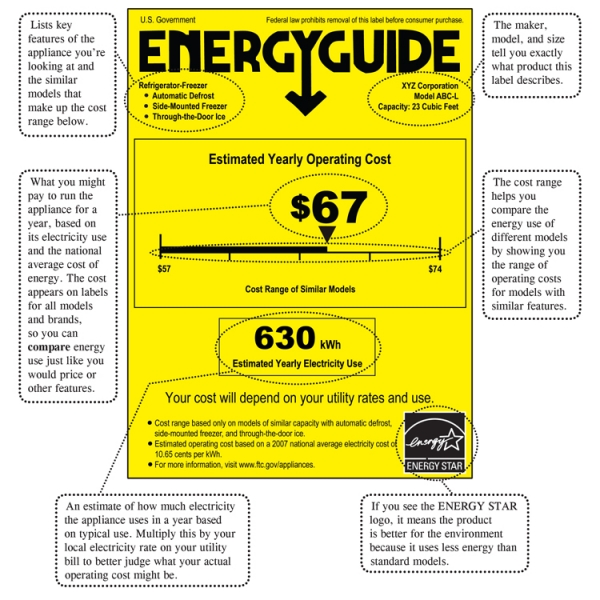 The EnergyGuide label, which appears on large appliances sold in the U.S. EnergyStar certification is included on the label.
Credit: FTC

“Energy Star is often seen as a soft way to regulate,” he said. “The fact that this is a voluntary program and it can be implemented at low cost makes it very appealing. Energy Star has been adopted all over the world. It is often the first policy being used in markets where energy efficiency is not yet regulated.”

The program is also used in Australia, Canada, the European Union, Japan, New Zealand, Switzerland and Taiwan, with several others in the process of implementing it.

Without the program, the energy efficiency of common appliances may stagnate, and an industry-backed alternative may not be as successful.

“The average energy efficiency of appliances would not improve as quickly without the Energy Star program,” Gillingham said. “It is likely that there would still be innovation for the very most efficient of the appliances because some subset of customers would value this efficiency.”

Houde said that in the absence of Energy Star, manufacturers would develop their own energy efficiency certification.

“But letting manufacturers self-regulate themselves would most likely result in a very lax program with much lower energy savings,” he said.

Lowell Ungar, a policy advisor for the American Council for an Energy-Efficient Economy, an advocacy group, said about 90 percent of consumers are familiar with the Energy Star brand, and most of them consider it when making purchases.

“Manufacturers and retailers rely on Energy Star as a mark of quality as well as energy savings and environmental benefits,” Ungar said. “It helps them sell products with improved technologies, not just the cheapest commodity product. With less consumer information, it will be harder to sell better products.”

You May Also Like:
February’s Warmth, Brought to You by Climate Change
Antarctica Just Shed a Manhattan-Sized Chunk of Ice
America’s Climate Pollution is Falling, EPA Report Says