Tuesday marked the start of confirmation hearings for President-elect Trump’s cabinet nominees. The grueling sessions allow senators from both parties to probe nominees’ backgrounds, question their views and priorities for the agencies they’ll be tasked with running, and weigh their expertise.

One potential flashpoint for a number of nominees is climate change and clean energy. Many of Trump’s nominees — and Trump himself — have widely expressed climate science denialism and questioned the value of clean energy. 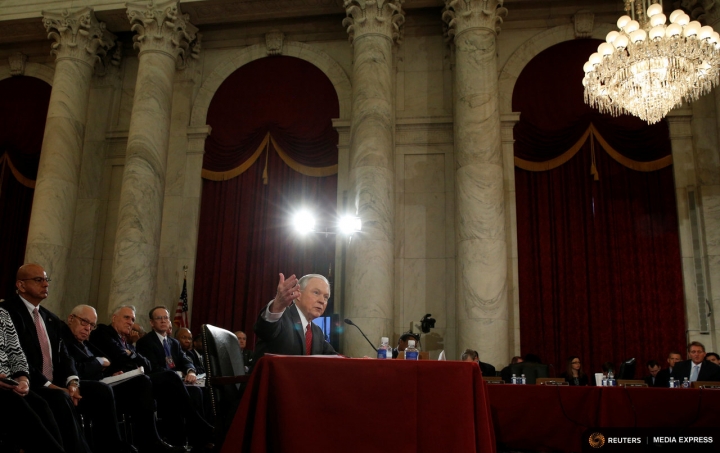 For nominees like Rex Tillerson (Secretary of State), Rep. Ryan Zinke (Interior Secretary), Rick Perry (Energy Secretary), Scott Pruitt (Environmental Protection Agency Administrator) and Wilbur Ross (Commerce Secretary), climate views are likely to be a focal point of confirmation hearings. All five have been nominated to run agencies where climate change and energy policy is a major part of the job.

Tillerson would be in charge of the State Department and its sprawling climate aid budget and he would play a prominent role in setting the U.S. tone for international climate talks. Zinke would oversee a massive chunk of oil, gas and renewable energy leasing on vast swathes of federal lands.

The confirmation hearings will give senators and U.S. citizens their best chance to understand how each of these nominees would manage the climate and energy portfolios they inherit. Given the extreme views at odds with science that a number of Trump’s nominees have expressed, it seems likely that senators will probe the nominees to understand why and how their views would influence their respective agencies in the coming years.

Climate Central asked climate and energy experts to talk about climate questions they would ask Trump’s nominees. Here are their responses, lightly edited for clarity:

Michael Burger, executive director of Columbia’s Sabin Center for Climate Change Law: Would you participate, or seek clearance to participate, in any discussions or decisions pertaining to climate change in your first year in office, even though you have stated that you will not participate in matters in which Exxon is a party? (Note that Exxon has made public statements regarding climate change and is a party to several climate change-related lawsuits.)

Follow-up questions: Do you understand that climate scientists have determined that it is very likely that human emissions of greenhouse gases from fossil fuel combustion are causing climate change? Do you support international efforts to address this problem? Do you support the U.S.'s continued engagement in the Paris Agreement? Do you acknowledge that the only way to achieve the international community's agreed-upon goals for limiting global warming requires leaving a significant amount of fossil fuels in the ground?

Sherri Goodman, senior fellow at the Wilson Center: Climate change is an increasingly disruptive force in foreign relations, from the melting of the Arctic to the loss of low-lying Pacific Islands to prolonged droughts in the Middle East and Africa that fuel further instability in these already troubled regions. How will you ensure that climate change is factored in U.S. foreign policy decision making, to curb the increasingly instability being wrought by climate change? Will U.S. climate leadership be a principal priority in U.S. foreign policy as a means to ensure continued U.S. global leadership and to curb global climate disruption? If not, how will you address the loss of U.S. global influence on the advanced energy transition currently underway?

Mark Squillace, professor at University of Colorado Law School: The Obama administration has been working on a programmatic environmental impact statement to fix what many think is a broken coal leasing policy. Do you support the efforts to review and reform federal coal leasing to assure a fair return to the American people and to ensure that federal lands coal policy is administered in a manner sensitive to climate concerns?

Bruce Stein, climate adaptation expert at the National Wildlife Federation: Given that the impacts of climate change already are putting Department of Interior assets at risk, how would you ensure that federal land and wildlife managers continue to have access to the best available science for incorporating climate considerations into their work? What opportunities do you see for enhancing the climate resilience of federal lands, and for preventing the divestment of our public lands to state and private interests?

Mark Barteau, director of the Energy Institute at the University of Michigan: As governor of Texas, you were a strong proponent of both oil and gas production and wind energy. The Department of Energy’s stated mission is “to ensure America's security and prosperity by addressing its energy, environmental and nuclear challenges through transformative science and technology solutions.” Within the energy portfolio, how would you prioritize the department’s investments in creating “transformative science and technology solutions?”

Do you consider addressing climate change and the climate consequences of our energy choices to be a part of the department’s environmental stewardship mission? If you do not, please explain how you draw the boundaries around the Department of Energy’s explicit responsibilities.

Ken Caldeira, climate scientist at Stanford University and the Carnegie Institution: I would ask an open-ended question: “What do you see as the appropriate relationship between scientific findings and public policy? When the vast majority of scientists agree that something is a scientific fact, how should that be taken into account in the policy process?”

I would then say: “The vast majority of informed scientists believe that most of the global warming over the past 50 years is attributable to human activity. Do you agree with that assessment? If not, why not?”

Christine Todd Whitman, former Environmental Protection Agency Administrator: What does he understand the mission of the agency to be and is he willing to support it? What is his understanding of science as it relates to the mission? Does he accept cross border pollution and the issues around transport? Will he be willing to fully inform the president of needed protections of human health and the environment should they be counter to previous statements of his or the president's? Since the U.S. is the only developed country not to have environment as a formal cabinet department, would he be willing to support its elevation?

Cara Horowitz, executive director of the UCLA Emmett Institute on Climate Change and the Environment: Through public records act requests, it has been revealed that you have used your position as Oklahoma’s Attorney General as a mouthpiece for the oil and gas industry – literally taking letters that industry lobbyists wrote, putting them onto Oklahoma letterhead with minimal changes, and forwarding them to EPA without revealing their true authorship. Not surprisingly, these letters asked for a reduction in environmental regulations developed to safeguard environmental quality and public health. Why should the American people have confidence in your ability to stand up to the energy industry when necessary to protect communities from the burdens of pollution and the threat of climate change?

Anthony Ingraffea, engineering professor at Cornell: You have written that the climate change “. . . debate is far from settled. Scientists continue to disagree about the degree and extent of global warming and its connection to the actions of mankind.”  What would it take for you to admit that all three of these allegations are incorrect?

Which scientists, saying what, would change your mind?

If (oil and gas CEO) Harold Hamm told you he was no longer a climate change denier, would you believe him?

Rex Tillerson is no longer a climate change denier: why are you?

Katharine Hayhoe, climate modeler at Texas Tech University: How do you plan to protect the U.S. economy from the harmful impacts of climate change?

David Titley, climate and weather risk researcher at Penn State: I would ask him: His position on the importance of funding and maintaining long-term, high-quality climate observing systems? How would he work with NASA and the Office of Management and Budget to ensure the continuity of these records? Will he advocate within the administration and with the Congress for adequate funding to ensure the continuity of these datasets?

Does he support free and open access to publicly funded satellite, ocean, and weather data records collected by NOAA and the Department of Commerce?

Will he support NOAA’s efforts to further improve its global and regional climate models?

Does he support the goal for NOAA and the U.S. National Weather Service to have the most accurate weather prediction models available in the world?

What types of partnerships and interactions between the government, academic, and private sectors of the weather enterprise should Department of Commerce and NOAA support?

You May Also Like:
Trump’s ‘Extreme’ Cabinet Could Fuel Warming Crisis
Trump, Congress Could Halt State Action on Climate
Obama Just Made the Case for His Clean Energy Legacy
It’s Official: 2016 Was Second Hottest Year for U.S.