President Trump signed executive orders on Tuesday advancing the Keystone XL and Dakota Access pipelines, breathing new life into projects that were halted by the Obama administration and vehemently opposed by environmental and Native American groups.

Trump said that the U.S. would renegotiate both pipelines, which were stopped by the Obama administration because of their effects on the environment and climate. In taking the action, Trump fulfilled a pledge he made to voters on the campaign trail. 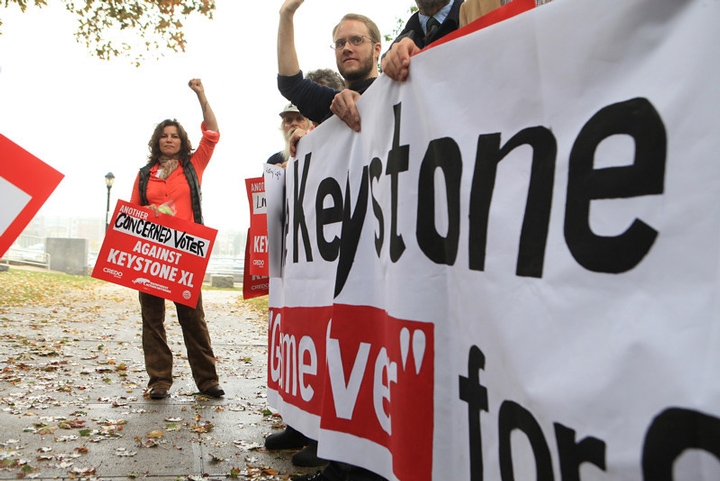 Protesters outside the State Department office in Boston in October, 2013.

“This is with regard to the construction of the Keystone pipeline, something that's been in dispute and it's subject to renegotiation by us,” Trump said Tuesday as he signed the executive orders. “We're going to renegotiate some of the terms and if they'd like, we'll see if we can get that pipeline built.”

If built, the Keystone XL Pipeline would carry crude oil from the oil sands of Alberta and the oil fields of North Dakota to refineries in Texas. It was proposed nearly a decade ago by the Canadian energy company TransCanada.

The Obama administration declined to permit Keystone XL in 2015 because it would not substantially contribute to the U.S. economy and did not align with U.S. climate policy, which at the time called for cutting U.S. carbon emissions to keep global warming below levels scientists consider dangers — 2°C (3.6°F).

The Canadian oil sands are among the continent’s worst climate polluters, dumping at least 17 percent more carbon emissions into the atmosphere than conventional oil.

Oil sands are among the dirtiest fossil fuels on earth. They’re a thick, clay-like substance laden with a hydrocarbon called bitumen that has to be strip mined from the earth. Refineries along the Texas Gulf Coast are best outfitted to process oil sands crude.

The Dakota Access Pipeline, a nearly-complete oil pipeline that would send crude from the shale oil fields of North Dakota to refineries in Texas, incited protests among members of the Standing Rock Sioux tribe last year at a construction site in North Dakota. The tribe opposed the pipeline primarily because of its environmental impact and potential damage it would do to nearby cultural sites.

The U.S. Army Corps of Engineers under the Obama administration stopped the project in December to study an alternative route for the pipeline.

Trump, who has falsely claimed that climate change is a hoax, told a group of auto executives  on Tuesday that “environmentalism is out of control.” He has scoffed at controls on carbon emissions and pledged during his campaign to order the Keystone XL and Dakota Access pipelines to be built. 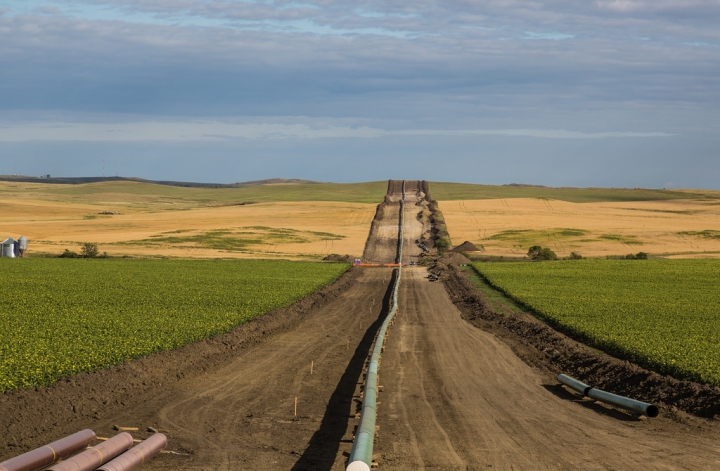 “It should not be a surprise that the Trump administration would reopen Keystone XL pipeline permit application process, as the president repeatedly pledged to do so during the campaign,” said Robert Stavins, director of the Environmental Economics Program at Harvard University.

“As for the consequences of the Keystone XL pipeline itself, it should be acknowledged that — despite what the Trump administration will likely claim — the positive effects on U.S. employment will be exceptionally small during the construction phase and trivial to non-existent after that.”

Stavins said there may be benefits to restarting Keystone XL, however, including maintaining good relations with Canada. Prime Minister Justin Trudeau has said he supports the pipeline.

Michael Wara, a professor of energy and environmental law at Stanford University, said the Keystone XL Pipeline has become much less important for oil sands producers since oil prices fell in 2014.

“Oil sands projects are being put on hold or cancelled,” Wara said. “So it's much less clear that the project proponents would move ahead even if it were approved.”

The Dakota Access Pipeline order, however, is different because it will displace oil tanker trains that are carrying North Dakota oil to refineries, he said. Trains are more expensive and hazardous for oil shipping than pipelines, making Dakota Access a more economical option for energy companies.

Warren Mabee, Canada Research Chair in Renewable Energy at Queens University in Kingston, Ontario, said Trump’s order would mean TransCanada could restart Keystone XL fairly quickly because much of the pipeline has already been built.

Mabee said environmental groups and Native American and First Nations groups who live along the Keystone XL route will see Trump’s order as a battle cry, opening it up to possible protests and legal action.

Rob Jackson, a professor of earth system science at Stanford University, said he is not surprised that Trump is reviving the Keystone XL.

“You can view this decision through different lenses,” Jackson said. “Transporting oil by pipeline is safer than by truck and rail. However, completing the Keystone pipeline makes it more likely that dirtier tar sands oil reaches the market, and at cheaper cost.”

You May Also Like:
NOAA’s New Satellite Sent Back Its First Amazing Images
Large Iceberg Poised to Break Off From Antarctica