Rep. Mike Pompeo (R-Kan.), President-elect Trump’s pick to head the CIA, appeared before the Senate Intelligence Committee on Thursday, during which he refused to answer whether he accepts the overwhelming evidence that climate change is occurring, let alone that it represents a threat to global stability.

His response — or lack thereof — stands in sharp contrast to how the agency and branches of the military view climate change. John Brennan, the current CIA director, has stated in unequivocal terms that climate change factors into the agency’s analysis of threats and instability. 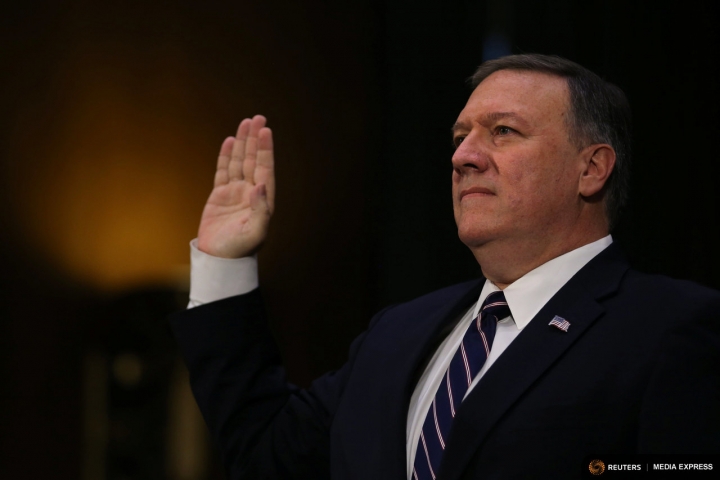 “Mankind’s relationship with the natural world is aggravating these problems and is a potential source of crisis itself,” Brennan said in a November 2015 speech. “Last year was the warmest on record, and this year is on track to be even warmer. Extreme weather, along with public policies affecting food and water supplies, can worsen or create humanitarian crises. Of the most immediate concern, sharply reduced crop yields in multiple places simultaneously could trigger a shock in food prices with devastating effect, especially in already-fragile regions such as Africa, the Middle East and South Asia.”

Research has shown that climate change has played a role in exacerbating conflict such as the Syrian civil war. Analysts have also found that drought has impacted smaller conflicts in the world’s poorest countries and they are increasingly concerned about the future impact of climate shocks on vulnerable people around the world.

If Pompeo’s hearing is any indication, there could be a major change in priorities if he’s confirmed to run the CIA. During Thursday’s hearing, Senator Kamala Harris (D-Calif.) asked Pompeo if he had any reason to doubt the overwhelming consensus that climate change is caused by humans.

“Frankly, as the director of CIA, I would prefer today not to get into the details of the climate debate and science,” he said, noting that “I stand by the things I’ve said previously with respect to that issue.”

Pompeo has previously referred to the Paris Agreement as a “radical climate change deal” and heavily implied that terrorism and climate change are separate issues. That’s a view that is not in line with the Pentagon, which has said that climate change poses “immediate risks.”

Pompeo has also cast doubt on the findings from the vast majority of climate scientists.

These statements stand in stark contrast to reality. The global average temperature has risen roughly 2°F since the start of the Industrial Revolution, and an overwhelming majority of the world’s scientists agree that’s due to human carbon pollution. All 10 of the world’s hottest years have occurred since 1998.

By standing by his statements, Pompeo is signalling that climate change is unlikely to be a priority at the CIA if he’s confirmed. That could leave the CIA without crucial context as it evaluates threats around the world.

“Climate change has contributed to the emergence of civil war, refugee flows and other elements of instability,” Marc Levy, the deputy director of the Center for International Earth Science Information Network, told Climate Central last year.

Later in Thursday’s hearing, Harris pressed Pompeo on if he would accept the science of climate change when presented with evidence.

“Will you . . . defer to that evidence even if it requires you to change a previously held position that may have been politically helpful to you?” she asked.

“Senator, you have my commitment to that. I’m an engineer by training,” he replied. “Facts and data matter, and you have my assurance if I’m confirmed in my role as CIA director, I will look at the evidence and give a straight-up answer to you and all the policymakers to whom I have a responsibility.”