President Trump signed an executive order on Friday greenlighting the Keystone XL pipeline after it cleared State Department review to bring tar sands oil from Canada to refineries on the Gulf Coast.

The Trump administration’s approval represents an about face from President Obama’s stance on an issue that has pitted environmentalists and local communities against Transcanada, which plans to build the pipeline that will shuttle up to 800,000 barrels of oil a day. 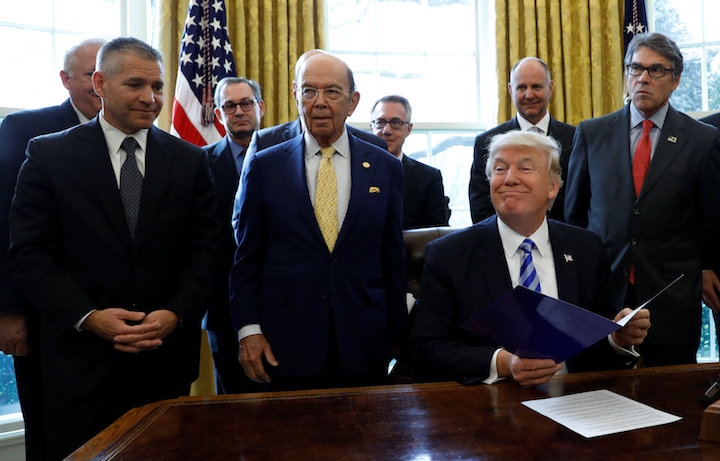 President Turmp smiles as he announces a permit for the Keystone XL pipeline.
Credit: Kevin Lamarque/Reuters

In its decision recommending approval, the State Department said it “considered a range of factors, including, but not limited to, foreign policy; energy security; environmental, cultural and economic impacts; and compliance with applicable law and policy.”

The statement is a sharp shift away from Obama’s State Department, which had said approving the project would undermine U.S. climate leadership abroad. In its new assessment, the State Department argued that in the wake of the rejection, “there have been numerous developments related to global action to address cliamte change, including announcements by many countries of their plans to do so.” It claimed that therefore the pipeline decision would have no bearing on U.S. standing.

Those critical of the decision, however, have said it's possible other countries will look at the U.S. taking climate change action less seriously and reduce their own ambitions. It also gives the U.S. less moral standing on climate and other issues.

“This is a conclusory statement, unsupported by reason or evidence,” Michael Burger, executive director of Columbia’s Sabin Center for Climate Law, said. “Of course other countries will take note that the U.S. is authorizing a pipeline to transport some of the most carbon-intensive fossil fuels on the planet and help bring them to market.”

Beyond the international sphere, the differing statements could also open the door for legal challenges at home.

“The fact that the current administration values climate impacts differently than President Obama did does not in and of itself doom the project, but we are in some interesting legal territory. I'd expect to see political and legal opposition mounted at the state level, as well as in federal court,” Burger said.

An analysis by the Environmental Protection Agency in 2015 found that the pipeline would release an extra 1.3 billion tons of carbon pollution and other greenhouse gas emissions over its 50-year lifespan. That’s the equivalent of adding 5.7 million cars to the road annually.

Others have argued that the impacts will be lower because tar sands oil is already being produced.

“The oil is flowing through rail and other pipelines regardless, so whether Keystone goes through or is blocked, the effect on greenhouse gas emissions will be minimal,” said Andrew Hoffman, the education director at the University of Michigan’s Graham Sustainability Institute. 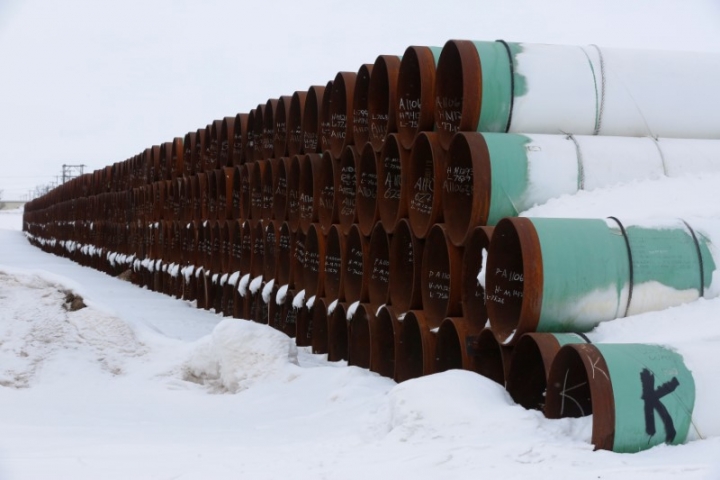 But while scientists might have different carbon pollution estimates, the real issue of Keystone XL is as a symbol at the center of a cantankerous battle over climate change and the fight to keep the world from dangerous levels of warming.

The environmental community had the upperhand under President Obama, who put the kibosh on the pipeline in November 2015.

“America is now a global leader when it comes to taking serious action to fight climate change,” Obama said at the time of the decision. “Frankly, approving this project would have undercut that global leadership and that is the biggest risk that we face.”

Trump took office promising to reverse that decision and on Friday, he made good on that promise (though he broke his promise to build the pipeline with American steel).

At the signing ceremony, Trump asked Transcanada President Russ Girling when the pipeline construction would begin, apparently unaware that the pipeline still needs permits in Nebraska. That state has been a battleground for activists and local landowners looking to stop the pipeline over concerns that any spills would contaminate the massive Ogallala Aquifer or other ecosystems in the environmentally unique Sand Hills region.

The move fits in line with signals that the Trump administration views climate leadership and economics as diametrically opposed. But while Trump praised the project as a job creator, it is only likely to create 35 permanent jobs.

There are also still outstanding questions of how long the tar sands can remain economically feasible. They represent a massive source of carbon pollution incompatible with a 2°C world, but more importantly, they’re more expensive to mine and refine than conventional oil, putting them at a disadvantage when oil prices are low.

“Frankly, for this reason, and because of longer-term trends toward cheaper renewables coupled with carbon pricing, the oil sands is likely a dead industry,” Thomas Homer-Dixon, chair of global systems at the Balsillie School of International Affairs in Waterloo, Ontario, told Climate Central earlier this year.