The Scripps Institute of Oceanography, which monitors carbon dioxide at the observatory, chronicled the dip in a blog post. The drop is notable because scientists hadn’t expected carbon dioxide to drop below that threshold at the top of Mauna Loa in our lifetimes. But there’s also the irony that it was caused by a storm that was likely in part fueled by warming waters related to climate change. 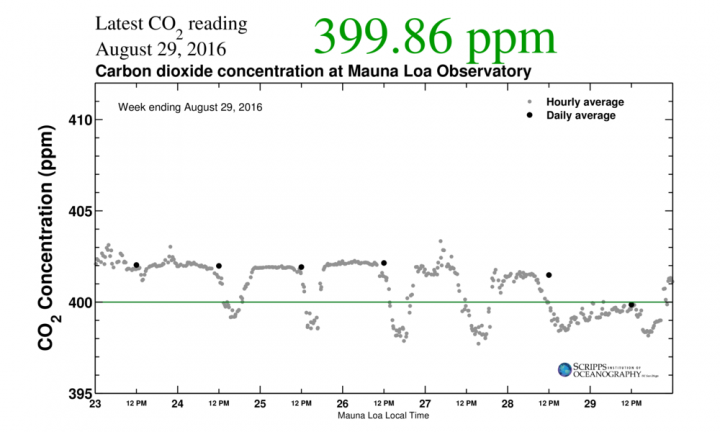 “A working hypothesis is that the low values are caused by the hurricane bringing in air from much further north, where we do expect to see sub-400 ppm values,” Ralph Keeling, the director of the Mauna Loa program at the Scripps Institution of Oceanography, said in the blog post. “Earlier this summer, we also saw values that were unseasonably low when a hurricane was looming.”

The Mauna Loa Observatory is a the gold standard of carbon dioxide measurements on the planet. The national landmark Keeling Curve is the iconic graph that shows the quickening rise of carbon dioxide in our atmosphere as human activities continue to produce more carbon pollution. The graph also has a seasonal seesaw thanks to plants in the northern hemisphere sucking up carbon dioxide in the summer and then releasing it after they die in the fall.

The Keeling Curve first passed the 400 ppm threshold — a largely symbolic sign that we’re putting the planet in uncharted territory — in 2013. Every year since, it’s dipped back below 400 ppm until this year.

Last year’s exceptional El Niño contributed to conditions that made it likely carbon dioxide would remain above 400 ppm permanently (at least in terms of human timeframes).

“I think we’re essentially over for good,” Keeling told Climate Central in May.

That held true until Madeline, which was a hurricane until it came within 85 miles of the Big Island’s South Point, sending carbon dioxide levels plummeting 3 ppm in the span of a day. On Tuesday, carbon dioxide levels were 399.86 ppm, a shade below the 400 ppm threshold, but below it nonetheless. Madeline also forced scientists to temporarily suspend monitoring activity on Wednesday and possibly longer if there were any power outages.

It’s a rather unexpected turn of events, though it’s most likely a novelty that will fade within the coming days.

Air circulation around Hawaii should return to more normal conditions after Hurricane Lester, the next hurricane in line to threaten Hawaii, passes. Carbon dioxide levels also tend to reach their nadir each year around the middle of September, so the sub-400 ppm respite at Mauna Loa will likely be short-lived.

Oh, and there’s also that whole thing about humans continuing to burn greenhouse gases and pollute the atmosphere.

Yeah, this could be one of the last days below 400 ppm for a long while. So enjoy it while you can.

You May Also Like:
Despite Major Melt, Arctic Sea Ice Will Miss Record Low
Natural Gas Emissions to Surpass Those of Coal in 2016
167 Tiny Maps Tell the Major Story of Climate Change
Drought-Hardy Yards Could Ease Californian Heat Waves