Humans appear to be delivering one-two punches to tropical rainforests, with new research projecting that climate change will reshape how the ecosystems recover following logging.

Scientists simulated how different trees in tropical rainforests will respond to prolonged droughts triggered by climate change, based on 14 years of data from Costa Rica study plots. 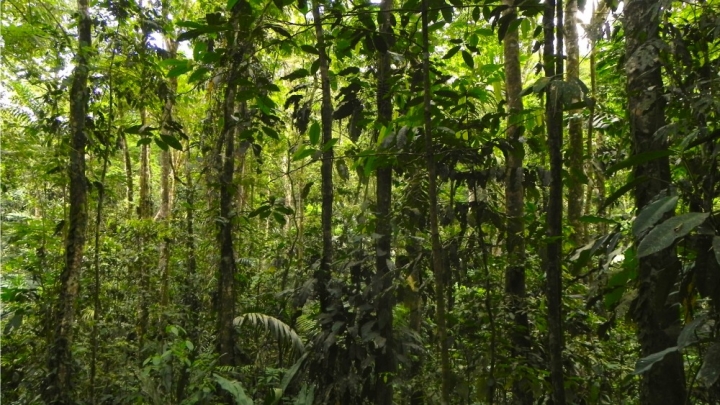 An experimental plot in Costa Rica that provided data for the new study.
Credit: Robin Chazdon

Their findings suggest that profound changes lay ahead for these important ecosystems around the world, and that the changes may accelerate global warming.

Although numerous studies have already investigated how tropical forests will be affected by global warming, most of them have involved mature stands of trees.

“Yet the majority of tropical forests in the world are secondary forests — forests that are recovering from some kind of disturbance,” said María Uriarte, a Columbia University ecology professor who led the study, which was published Monday in Functional Ecology.

The findings show that tropical rainforest tree species that have harder wood and tougher leaves will better withstand droughts triggered by global warming than others, which may wither around them.

That could lead to more open rainforests that capture and store less carbon pollution than before — a feedback that would exacerbate the problem of global warming. The findings also indicate that the rainforests could also take longer to recover after being cut down. 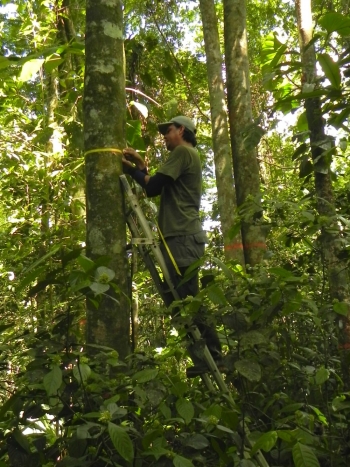 Technician Enrique Salicetti measures the diameter of a tree in an experimental plot in Costa Rica.
Credit: Robin Chazdon

“The species that tend to be resistant to drought grow more slowly than those that are sensitive to drought,” Uriarte said.

The findings could be relevant outside of Costa Rica, said William Anderegg, an ecologist at the University of Utah. “Some of the observations and findings they make are probably going to hold true across many other tropical forests.”

Despite international efforts to curb tropical deforestation, countries such as Brazil, Indonesia and Congo continue to see their forests cut down at worrying rates to produce wood, paper and charcoal and to clear space for farming.

The new research “doesn't tell us about the vulnerability of the entire forest” as it regrows following logging, Anderegg said. “But it does give us a clearer picture of which trees might be the winners and the losers. and that’s very useful.”

It remains unclear how far-reaching those effects will be in hampering the ability of recovering forests to draw climate pollution out of the atmosphere. But the implications for global warming could be significant.

“I think these forest will still be net accumulators of carbon, but the rate at which that happens will be slowed down,” said Robin Chazdon, the University of Connecticut professor who manages the test plots in Costa Rica that provided data underpinning the new findings. She was also a coauthor of the study.

“It could potentially be reversed,” Chazdon said. “They could become sources of carbon instead of sinks.”

You May Also Like:
Oil Leasing Protests a New Front in Climate Policy Fight?
Arctic Sea Ice Is in Record Low Territory (Again)
Every State’s Temperature Trend for Every Season