Tornado Season Is Here: Watches Out Across Mid-South

It’s a sure sign that winter really is over and spring has arrived: The first major tornado threat of the season is here, with tornado watches across a large portion of the mid-South into Thursday evening. 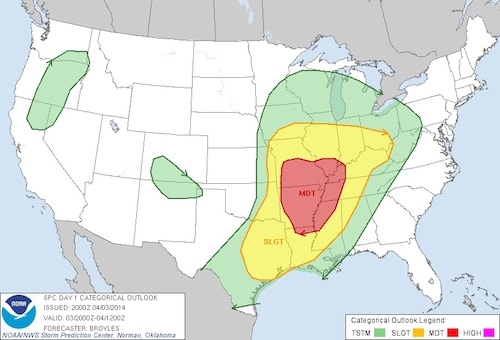 The outlook for severe weather across the country on April 3, 2014. Several tornado watches were issued for the area showing moderate risk.
Credit: NOAA SPC

The storm threat is right on time, as early April is climatologically the period when tornado season begins to ramp up, said Bill Bunting, chief of operations at the Storm Prediction Center in Norman, Okla., which monitors tornado activity across the country.

Tornadoes start cropping up during this time because spring is a transitional weather season, when the types of air masses that need to mix to create the conditions conducive to forming twisters are more likely to come together.

The first part of spring, in March, was relatively quiet in terms of the sheer number of tornadoes. There were 25 tornadoes this March, according to preliminary SPC numbers, while the month typically sees about 80 on average, according to the National Oceanic and Atmospheric Administration, the SPC’s parent agency. Tornado numbers were kept low by the particularly bitter chill of this winter, which lingered and quashed tornado formation.

But “we know this winter had to have ended at some point in time,” Bunting said, and that time seems to have come.

Spring sunshine is warming the Earth and warm, moist air from over the Gulf of Mexico is pushing up over the central and southern states, colliding with air originating over the higher terrain of the Southwest.

That collision “creates an environment that maximizes the instability in the atmosphere,” Bunting told Climate Central. “We’ve really got all the ingredients in place.” Translation: It’s prime tornado time.

While at 4:45 p.m. ET, only about half a dozen tornado warnings had been issued, Bunting said he expected that number to increase during the early evening.

Bunting advised those in the tornado watch areas – which include northeastern Texas, southeastern Oklahoma, western Arkansas and southern Missouri – to keep an eye on the weather and ensure they were ready should a warning be issued. (Tornado “watches” means that conditions for tornado formation are in place, while “warnings” mean that a tornado has been spotted on the ground or suspected tornado rotation has been spotted on radar.)

This outbreak is occurring on the anniversary of one of the largest and most deadly tornado outbreaks in U.S. history, the so-called Super Outbreak of 1974.

“It’s always interesting when you have a significant event like today” coincide with a historic event, Bunting said, but added that it’s not an uncommon occurrence at this time of year. “We’re in that time of year where almost every day, or many days in April and May, have historical context,” he said.

Exactly what tonight will bring remains to be seen, but forecasters certainly don’t expect it to be anything like the Super Outbreak. “Hopefully, we’ll look back tomorrow and say we dodged a bullet,” Bunting said.

The threat doesn’t end today, though, as the system causing all the ruckus moves eastward into more populated regions, something Bunting urged those in the path not to forget.

What will happen later in the tornado season is also uncertain, as a quiet beginning to spring can give way to a surge in activity later on. Last spring drove that point home, as March and April were relatively quiet “and then in mid-May it was like the flip of a switch,” Bunting said. May 20 saw the EF5 twister that devastated Moore, Okla., and May 31 saw the EF3 El Reno tornado, the widest ever observed at 2.6 miles across.