June is likely to go into the 2014 books as the busiest month for tornadoes in what has been an overall quiet year. Tornado activity, which was initially on a record-low pace through late April, picked up significantly last month, and now the odds of a tornado happening anywhere in the U.S. on a given day are on the decline. 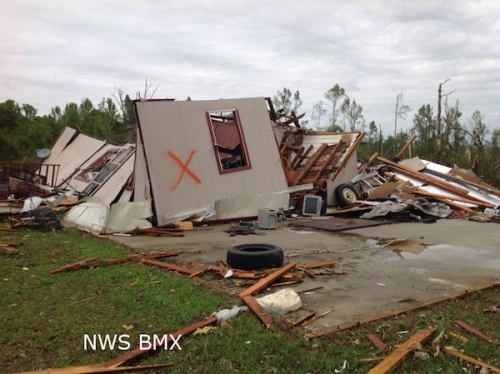 A manufactured home was destroyed by an EF3 tornado that touched down in Lee County, Ala., on April 29, 2014, during one of the few notable outbreaks in a below-average tornado season.
Click image to enlarge. Credit: NWS

The June uptick in tornadoes meant that places like Nebraska saw much of the tornado action this year, while traditional Tornado Alley mainstays like Oklahoma were unusually quiet (a relief to residents of the Oklahoma City metro area, still recovering from an outbreak in 2013 that spawned a twister that reached EF5 strength as it ripped through the suburb of Moore).

But even with the increase of twisters in June, the year has had below-normal activity: the 804 preliminary reports through July 9 (which likely contains duplicate reports of the same storms) is 25 percent below the 1,057 reports typically seen by this date in an average year, according to data from the NOAA.

The past 3 years have actually all seen relatively low activity — despite some terrible storms, like the one that hit Moore — in stark contrast to the 2011 tornado season, which had the second highest number of tornadoes on record.

What accounts for the wildly diverging tornado activity in recent years is unclear, but something that Carbin and his colleague Harold Brooks, a senior scientist with NOAA’s National Severe Storms Laboratory, are actively researching. Seasonal activity has always varied from year to year, but the variation has been more stark in recent decades and Carbin and Brooks are exploring the possibility that the effects of global warming might play a role, as well as other climate cycles.

On average, tornado activity slowly ramps up from the beginning of January through March, when spring’s transitional weather begins to bring together the types of air masses that need to mix to create the conditions conducive to forming twisters. 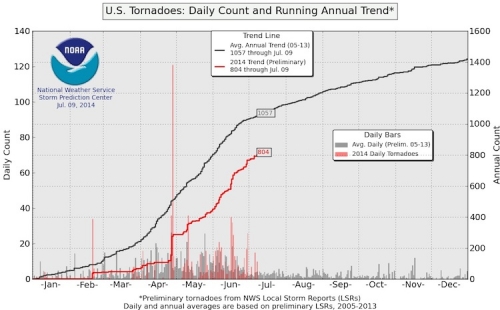 But this year, with the exception of an outbreak in the Midwest and Southeast in late February, tornado activity in the first three months of the year stayed fairly flat. While March normally sees about 80 tornadoes, only 25 were reported this March. Only 93 tornado reports had been made by April 24.

“It’s looking like the slowest start to tornadoes in any year that we have records for,” Carbin told Climate Central in late April.

Cooler-than-normal conditions that lingered into the spring in the eastern U.S. after the frigid winter limited tornado formation. But conditions began to change in late April as warm, moist Gulf air moved in and more instability, which helps form the convective storms that spawn tornadoes, emerged in the atmosphere.

One of the only other notable outbreaks of the year so far came on April 28, when dozens of tornadoes popped up across Mississippi and Alabama and a few other states. That outbreak nearly doubled the number of tornado reports for the year.

In general, there was a major jump in tornado numbers at the end of April, and tornado activity as a whole increased throughout May. But the prime area for tornado activity in that month — the Southern Plains — stayed relatively quiet.

In an average May, Oklahoma, for example, usually sees about 22 twisters touch down within its borders. This May there were just 3.

May 2014 didn't break any records for OK tornadoes, but it was very quiet! #okwx #notcomplaining! pic.twitter.com/qfhtqB5SAl

Year-to-date, Oklahoma has seen just 11 reported tornadoes, while Colorado has reported 47 and Nebraska 85.

While the tornadoes in Colorado and Nebraska spurred considerable media attention and numerous tweets, the tornadoes in both places weren’t surprising. Northeastern Colorado, where most of the tornado reports for that state were made, is a prime tornado target in early June.

If you want to go tornado chasing during the first week of June “the immediate place you go to is Colorado,” Brooks told Climate Central.

Brooks said that the typical activity in places like Oklahoma and Kansas can overshadow other areas: In an average May, those two states typically see 28 and 38 tornadoes, respectively, while Colorado, for example, sees only 12. The dearth of tornadoes in the usual Tornado Alley spots this year may have shifted the spotlight to other areas.

“A little bit of it is just perception,” Brooks said. “You get tornadoes in Colorado every year.”

Nebraska is no stranger to June tornadoes as well, as the prime area for tornado formation shifts northward with the season, moving into the Northern Plains by early summer.

Note: The recent increase in #tornado activity in #Nebraska is NOT unusual with June historically most active month. pic.twitter.com/yCaNP8KpQE

“The large-scale northward migration of the jet stream is going to influence where these tornado events occur,” Carbin said.

Nebraska “has been leading the way this year” in terms of tornadoes, Carbin said, and while it’s no stranger to tornado danger, it has been a few years since the state has had such active tornado weather. 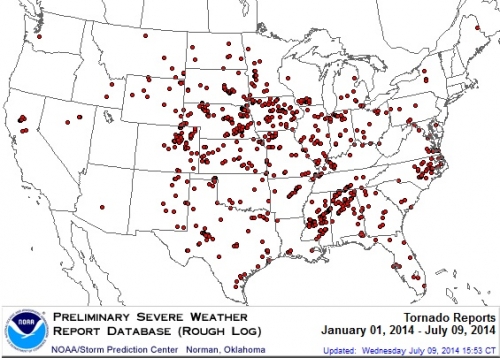 Tornado reports across the U.S. through July 9, 2014.
Click image to enlarge. Credit: NOAA

The reason for Nebraska’s tornado boom and Oklahoma’s bust could be that  “we got into the pattern supporting Great Plains tornado events perhaps a little later than you might expect,” Carbin said, so that when conditions were right, the jet stream had moved north and away from the Southern Plains.

That late arrival also meant that “we’ve had a more active June than we did May,” Carbin said.

Generally one of those two months is the most active, though April has also been known to spawn the most twisters, as it did in 2011.

The tornado activity in June likely means that 2014 won’t end as the year with the least amount of tornadoes. At the end of June, the number of tornadoes reported for 2014 is a little ahead of where it was at this time last year, even though it’s still below normal.

The amount that recent tornado seasons have varied by has been outside the typical bounds — 2011’s incredibly high total was just as unusual as the slow start to 2014. Carbin and Brooks have been looking at this and other trends — such as changes in the number of days that see tornadoes as well as the number of tornadoes per day — to see if they can tease out what’s influencing them, including the possibility of climate change. 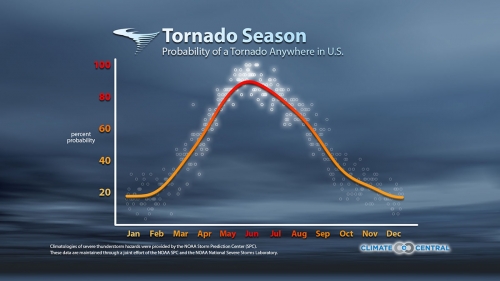 The probability of at least one tornado occurring somewhere in the U.S. on a given day, based on tornado reports since 1980. Click to enlarge. Credit: Climate Central

With the arrival of July, we’re now moving into a generally quieter time of year so tornado numbers should stay below normal. That said, hurricane season could be a wild card: “What’s going to turn things around, if anything, at this point is” if tropical cyclones hitting Florida or the Gulf Coast generate twisters, Carbin said.

Even with that possibility, 2014 is still some 300 tornadoes below normal.