Three Tools to Solve The Mystery of Ocean Acidity

Carbon dioxide can make seawater acidic through a relatively straightforward chemical process. Between a quarter and a third of our atmospheric carbon dioxide (CO2) pollution dissolves into an ocean, where it reacts with water (trusty H2O) in such a way that hydrogen ions — the essence of acidity — squirt out. The reactions lower overall pH levels. They can also take heavy tolls on farmed and wild marine life by stealing away chemicals that many shellfish and coral need to build their shells and skeletons.

Oceanwide changes in pH levels have been, in the words of the recent Intergovernmental Panel on Climate Change assessment, “profound.” Measuring the changes underway, however, is not straightforward. Most pH sensors produce questionable data, and ocean acidification monitoring stations are growing in number but remain sparse. 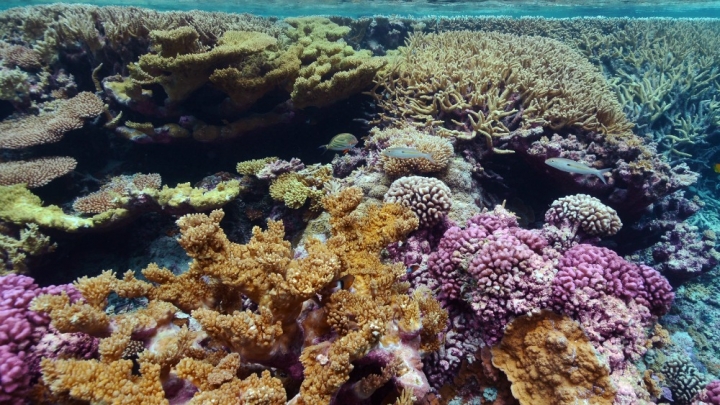 Acidity levels in different parts of a sea can be as variable as weather on land, with ocean currents, water pollution and the presence of carbon dioxide-guzzling plants all having an influence. That’s why it’s not possible to extrapolate data from monitoring stations and vessels to assess acidification rates in all of the tidal nooks and deepwater crannies of an ocean.

“Everyone talks about pH, but it’s not usually directly measured — one can do it very crudely,” said Phil Williamson, who coordinates the U.K.’s acidification research program and co-chairs the Global Ocean Acidification Observing Network. “Sensors that directly give you pH are not easy to construct and not easy to handle.”

The United Nations General Assembly in late 2013 called on world governments “to urgently pursue further research on ocean acidification, especially programmes of observation and measurement.” Rapid advances since then could help scientists peer more deeply into the atomic structure of the water as policymakers search for local and global solutions to the overwhelming problems caused by acidification. Given the right data, for example, an oyster farmer might have enough time to close intake valves before a would-be harvest is destroyed by a wash of acidic water.

Separate research, meanwhile, is warning of a looming marine catastrophe caused by current levels of atmospheric carbon dioxide pollution — which are already waxing above 400 parts per million (ppm), up from 280 ppm in centuries past. Yet U.N. climate negotiations have largely ignored the acidification problem, focusing instead on the goal of curbing global warming to less than 2°C (3.6°F). Achieving that goal might require limiting atmospheric carbon dioxide levels to below 450 to 500 ppm — a level of pollution that some experts fear will doom coral reefs. 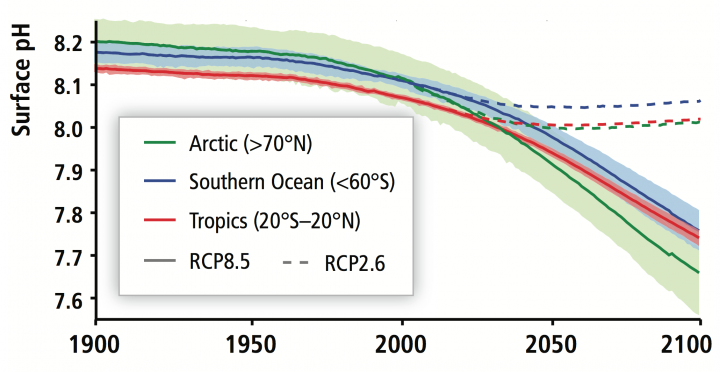 “The 2°C target was all about warming and didn’t involve consideration of ocean acidification in any direct way,” said University of Queensland professor Ove Hoegh-Guldberg, one of the lead authors of the recent Intergovernmental Panel on Climate Change assessment chapter dealing with ocean impacts. He said research that he coauthored in 2009, published in the journal Marine Pollution Bulletin, “makes the argument that coral reefs, which house a million species and provide food and income to 500 million people, will disappear unless we turn carbon dioxide to about 350 ppm.”

The Southern Ocean Carbon and Climate Observations and Modeling project, which involves Climate Central staff and aims to track changes underway surrounding Antarctica, has developed improved pH sensors that could operate for five years or more on autonomous diving instruments. The project plans to deploy about 200 of the data-collecting and transmitting devices, known as Argo floats. Each float will be capable of monitoring not only temperature, salinity and location, but also acidity and nitrate and oxygen content in the water.

“Essentially, this is a completely robotic observing system that never gets touched by human hands after deployment,” Ken Johnson, a Monterey Bay Aquarium Research Institute scientist involved with the project, said. “The goal is an extremely precise and accurate sensor. Add in the requirement for five years, which is the lifetime of a profiling float, and that’s just something that isn’t done in any other realm of science or engineering.”

As well as moving forward with the Southern Ocean monitoring project, Johnson is a part of a team that was named last week as one of 14 finalists in the $2 million Wendy Schmidt Ocean Health XPRIZE, which aims to develop affordable and accurate pH-sensing technology.

“We’re incentivizing devices that can be used by anyone, mostly in habitats where humans have various interests,” Paul Bunje, senior director of oceans at XPRIZE, said. “It could be aquaculture; it could be in marine protected areas.”

Two winning teams will receive a cash prize of $1 million apiece, and some participants have pledged to reinvest any winnings in further developing their products.

The XPRIZE group also plans to help teams commercialize new sensor technology, which could eventually be used by virtually anybody interested in monitoring ocean health — from school groups to marine park officials.

More than a century’s worth of gradually declining pH levels at Alaska’s Attu Island, in the Bering Sea, were described in a paper published Monday in Proceedings of the National Academy of Sciences. The scientists behind the research, from Europe and North America, didn’t get their data from a magical ancient pH-sensing prototype, but by analyzing isotopes from algae that grew amongst sampled coral.

“They’ve really got a neat technique,” the Global Ocean Acidification Observing Network’s Williamson said after reviewing the paper. “I was impressed.”

Not only did the researchers confirm that pH levels fell at a hastening pace during the 20th century as greenhouse gas pollution levels rose — they also found that the pH levels have fluctuated a surprisingly substantial amount between years and seasons. They think that’s linked to growing cycles of seaweeds that consume CO2 as they photosynthesize.

“Mostly in these kelp-dominated habitats you have huge fluctuations,” GEOMAR Helmholtz Centre for Ocean Research Kiel scientist Jan Fietzke, who was involved with the research, said. “You see the same thing if you go to the California coast.”

There’s no satellite in space that’s capable of directly measuring ocean acidity, but an international team of scientists writing in the journal Environmental Science & Technology described last week how satellite measurements of sea surface temperatures, salinity and plankton activity could be combined and used to estimate pH. 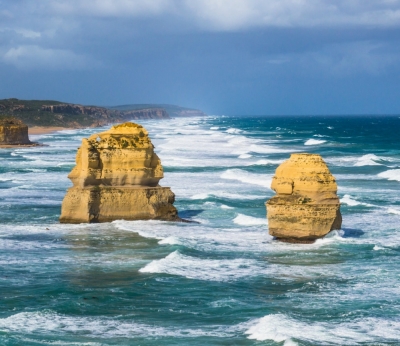 Using funding from the European Space Agency, the researchers, from Europe, the U.S. and India, concluded that using satellite data in this way may be “the most efficient way to monitor the ocean surface” — yet the “potential capabilities of space-based measurements” in ocean acidification research “remain largely untapped.”

The paper excited experts, but they warned that the use of satellite data to estimate pH levels will never supplant the need for actual measurements.

“You could perhaps use it to identify regions that, based on the satellite data, might be places that are seasonally threatened by acidification,” Woods Hole Oceanographic Institution chemist Scott Doney, who was not involved with the research, said. “The satellites might help you identify that, but then you’d want to really do in situ observations.”

The research team that published last week’s paper is now working to assess which of the potential methods of using satellite data would be most effective in assessing pH. “What we’re currently working on is drilling down and seeing which methods perform well,” Jamie Shutler, a University of Exeter oceanographer who was involved with the research, said.

Whichever methods are eventually recommended for adoption, Shutler agreed that the satellite-based measurements would need to be accompanied by real-world pH measurements — something that would require the use of accurate sensors.

“You can get a lot from collecting in situ data, but you don’t really get the wider spatial variations,” Shutler said.

You May Also Like:
Carbon Pricing Pays the Way for Cleaner Energy
Largest Offshore Wind Farm Approved for UK Coast
Freeze Frame: Drone Captures Niagara Falls on Ice
Utilities May Get a Break from EPA on Cutting CO2
Dry or Snowy? Winter Weather Splits the U.S.