To Shrink a Goat, Warm the Globe

If a young Italian goat magically joined Alice in a climate-changed Wonderland, new research suggests it would skip the fattening cake and suckle instead at the body-shrinking potion.

As global warming’s grip strengthens around the Italian Alps’ already-diminutive chamois — as the goat-antelope species that was studied is known — temperature rise appears to be wringing the body weight out of the population’s yearlings. 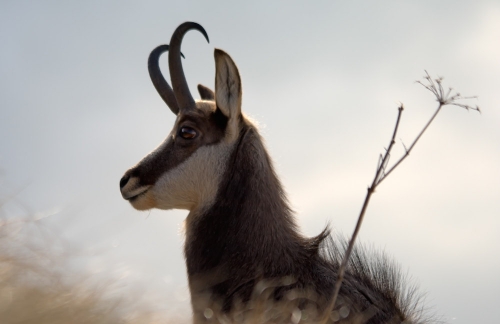 Between 1979 and 2010, as spring and summer temperatures in parts of the Italian Alps rose by more than 5°F, the average weight of the 1- to 2-year-old chamois that live there shrunk by what Philip Stephens, a Durham University professor, described as an “astonishing” 20 to 25 percent.

“It does look like there’s a direct relationship to temperature,” said Stephens. He was part of a team that analyzed the body sizes of 10,455 yearlings shot by hunters during the study period. The findings were published in Frontiers in Zoology.

The average weights of juveniles were analyzed because there was a lot of data on them — the hunters bagged more Bambis than Bambis’ mothers. But the paper’s lead author, Tom Mason, now a postdoctoral researcher at Laval University, said the data he has seen on older chamois suggests to him that they, too, are shrinking.

If that’s true, then greatness is being baked out of the ungulate princes of Italy’s montane forests, with potentially ecosystem-rattling consequences.

Global warming tends to spur animals to evolve to become smaller to help them cope with heat. That has been the case both in recent and prehistoric times. The phenomenon is pronounced in mammals, with larger species generally faring better in cold environments than in warm ones. National University of Singapore researchers reviewed scientific literature on this several years ago, reporting in Nature Climate Change that they found reports of 36 animal species shrinking as temperatures rose, compared with nine of them getting bigger:

But it’s not known whether the chamois are shrinking to adapt to the changing climate, or whether the warmer conditions are simply leaving them hungry and undernourished.

During the study period, hunting pressures within the three studied areas declined, which increased herd sizes, potentially increasing competition for food. Mason, however, says the trend toward smaller chamois continued even after population densities stabilized during the second half of the study period.

It’s also possible that the young chamois are becoming less frantic about piling on pounds during spring and summer, because the winters are less brutal than they used to be. But Mason points out that the region does still occasionally experience severe winters.

The researchers wondered whether food was in shorter supply than it used to be. But when they analyzed satellite imagery, they found that the vegetation upon which the chamois feed did not decline during the study period.

Could it be that it’s just getting too darned hot to eat?

The team speculates that the rising temperatures during the key feeding seasons of spring and summer might be forcing the animals to be slothful when they would otherwise be eating — though more research would be needed to confirm whether that’s the case.

“When it gets really hot, they can’t forage for as much time,” Mason said. “It forces them to sit around in the shade and rest more.”

You May Also Like:
Hot News: 2014 On Track to Become Warmest Year
Zombie Glacier Surprises Scientists
Polar Vortex Spiked U.S. CO2 Emissions in 2013
Jack Frost Not Exactly Nipping at Your Nose
Climate Fueled Some of 2013’s Most Extreme Events