Tiny Plankton in the Oceans Could Have Big Impact

LONDON – Some of the most minute forms of marine life may have a significant effect both on more developed creatures and on the oceans’ ability to absorb carbon dioxide.

An international team of scientists has found that the smallest species of plankton thrive when levels of carbon dioxide (CO2), the main greenhouse gas from human sources, rise and increase the acidity of the oceans. 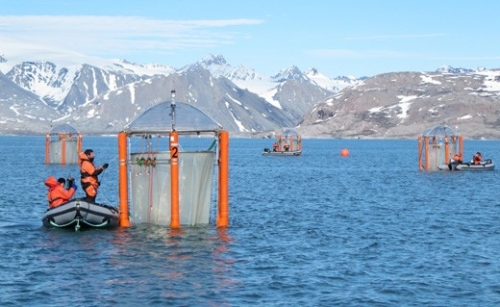 Scientists check the mesocosms, a tool used to study plankton, off the coast of Svalbard, Norway.
Credit: Ulf Riebesell/GEOMAR via Climate News Network

Writing in Biogeosciences, a journal of the European Geosciences Union, they say this could knock the marine food web off balance and also lessen the oceans’ uptake of CO2, a mechanism which helps to regulate the global climate by absorbing gas which would otherwise heat the atmosphere.

The study took place off the coast of Svalbard, the Norwegian high Arctic archipelago, and was led by Ulf Riebesell, a professor of biological oceanography at the GEOMAR Helmholtz Centre for Ocean Researct Kiel in Germany.

“If the tiny plankton blooms, it consumes the nutrients that are normally also available to larger plankton species,” he says.

But the bigger plankton play an important role in transferring carbon down to the ocean depths. So in a system dominated by the minute pico- and nanoplankton, less carbon will leave surface waters and the oceans could in future absorb less CO2, says Riebesell.

The potential imbalance in the food web may have an even bigger impact. Large plankton are also important as producers of a climate-cooling gas called dimethyl sulphide, which stimulates cloud formation over the oceans. Less dimethyl sulphide will mean more sunlight reaches the Earth’s surface, adding to the greenhouse effect.

The root of the problem is the growing acidity of the Arctic. This, coupled with the availability of nutrients, allows the very smallest plankton to thrive at the expense of their larger cousins.

The Arctic seas are among those most vulnerable to acidification, because the cold allows them to absorb more CO2. This increasing acidity is already known to affect some Arctic creatures which use calcium to build their shells, including some sea snails, mussels and other mollusks. 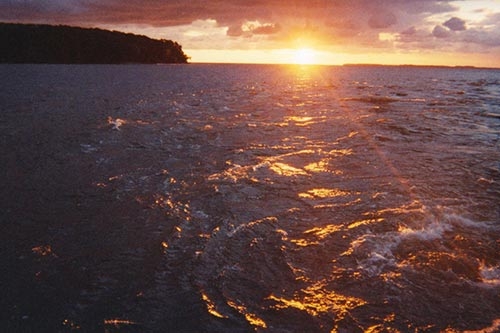 But scientists had not known until now how acidification alters both the base of the marine food web and oceanic carbon transport. The five week-long field study, conducted in the Kongsfjord in Svalbard, sought to close this knowledge gap.

For the experiment the scientists deployed nine large “mesocosms” – 26-foot long flotation frames carrying plastic bags with a capacity of 4.64 square feet. These bags let researchers study plankton communities in their natural environment under controlled conditions, rather than in a laboratory.

The scientists gradually added CO2 to the mesocosm water so that it reached the acidity levels expected in 20, 40, 60, 80, and 100 years, with two bags left as controls. They also added nutrients to simulate a natural plankton bloom.

They found that, with higher CO2, pico- and, to a lesser extent, nanoplankton grew, consuming nutrients and leaving fewer for larger plankton. “The different responses we observed made it clear that the communities’ sensitivity to acidification depends strongly on whether or not nutrients are available,” Riebesell says.

Researchers at two UK universities reported earlier this month that they had found that rising temperatures in the oceans would affect plankton development, upsetting the natural cycles of carbon dioxide, nitrogen and phosphorous.