The U.S. now contributes more than 10 percent of the total global crude oil supply as of the end of 2013, a result of the advances in hydraulic fracturing and drilling technology that are driving the oil and gas boom in Texas, North Dakota and other Western states, new U.S. Energy Information Administration data show.

The drilling frenzy in the West's oil fields is mainly about one thing: “tight” crude.

Most of the easiest oil to drill in the U.S. has been in decline, so energy companies over the last decade have looked to layers of rock that oil cannot easily flow through called “tight” rock formations to unlock oil and natural gas that was previously too costly to reach. Getting that tight crude requires hydraulical fracturing, or fracking, using high volumes of water, sand and chemicals injected at high pressure to crack open, or frack, the rock, allowing the oil to flow into a well. 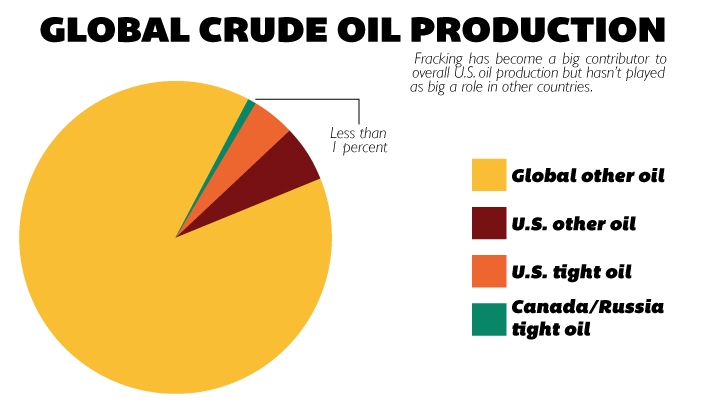 Based on fourth quarter 2013 data from U.S. Energy Information Administration

The list of ways the rush to produce tight oil in the U.S. may affect climate change and the environment is long and fraught with uncertainty: Scientists say there has been too little study on the impacts of oil and gas development on water supplies and the climate. Climate change-driving methane leaks in oil and gas production equipment haven’t been fully quantified. Natural gas burned off from oil wells in North Dakota's Bakken shale oil fields dumps millions of tons of carbon dioxide directly into the atmosphere. And, the burning of crude oil is a direct contributor to climate-changing carbon emissions.

Only the U.S., Canada and Russia produce tight oil commercially, the EIA reports, but the U.S. is by far the globe's top producer. Whereas Canada and Russia produce only a few hundred thousand barrels of tight oil per day, the U.S. produced more than 3.2 million barrels of tight oil each day during the fourth quarter of 2013, amounting to more than 40 percent of total U.S. oil production and 4.3 percent of total global oil production. U.S. crude oil is now 10.4 percent of the total global oil supply.

About 63 percent of U.S. tight oil comes from two places: western North Dakota’s Bakken shale, which is slated to be tied into the controversial Keystone XL Pipeline; and the Eagle Ford shale located in drought-stricken southern Texas.

Energy companies in both oil fields have been ramping up oil drilling, fracking and production dramatically since early 2010, when almost no oil was produced in south Texas. But after just four years, energy companies there produce as much as 1.3 million barrels of oil per day. That level of oil and gas development used more than 19 billion gallons of water between 2011 and 2013 in south Texas, stirring concern that energy development there could make the region more vulnerable to drought and water shortages, both of which could be exacerbated by climate change.

Much of that water in south Texas comes from aquifers deep underground that are being depleted by fracking, which uses up to about 4.5 million gallons of water per well, Monika Freyman, senior manager of the nonprofit group Ceres’ water program, said in February. Freyman is the author of a Ceres report issued last month detailing the energy industry’s impact to Texas water supplies.

So far, drought conditions haven’t slowed the pace of energy development anywhere in the U.S., and whatever its overall environmental impact, crude oil production in the U.S. is expected to keep increasing over the next few years. The EIA expects crude oil production in the U.S. to continue to rise from 7.84 million barrels per day produced in the fourth quarter of 2013 to a peak of just under 10 million barrels per day in 2019. After that, production is forecast to decline only gradually through 2040.

If that scenario plays out, it will mean the U.S.’s prominence as a crude oil producer will continue its rise, at least for a while, despite the many possible ways fracking could fuel climate change.

You May Also Like
The Best View You’ll See of the Spring Equinox
A Cold U.S. Winter for Sure, but 8th Warmest Globally
White House Brings Together Big Data & Climate Change
Wood Burning for Home Heating Trendy in Northeast