Newly released data shows that three European Union member countries have already met their renewable energy goals for 2020. A number of other members are also well on their way to meeting their benchmarks, though some countries, most notably the U.K., are a long ways away.

Eurostat, the main entity that keeps data on the EU, released renewable energy data for 2012 on Tuesday. Sweden leads the way for all EU members with 51 percent of its energy coming from renewables. It trails only Norway, which is not an EU member, in renewable production in Europe. 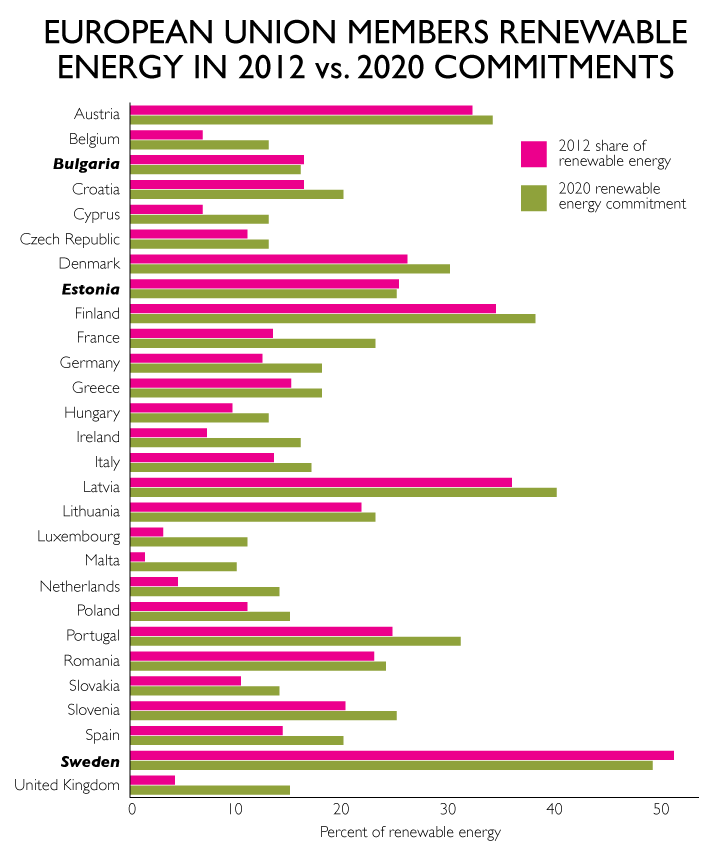 Twenty of the EU’s 28 members states are also more than halfway to meeting their 2020 goals. However, not all countries are ahead of the curve.

Malta and Luxembourg are bringing up the rear. But the U.K. is a more notable laggard, generating only 4.2 percent of its energy from renewables in 2012. There are signs that the U.K. may be looking more to nuclear power instead of renewables to help reduce its greenhouse gas emissions. Forbes reports that the U.K. has approved two nuclear reactors that would provide 7 percent of the nation’s electricity.

Overall, the EU received 14.1 percent of its energy from renewable sources in 2012, a roughly 6 percent increase since 2004. If that rate continues, the EU should be on track to meet its goal of using 20 percent renewable energy by 2020.

Though 2020 is still 6 years away, the EU is already looking beyond it. Recent EU negotiations have set a goal for renewables to provide 27 percent of all EU energy while reducing emissions to 40 percent below 1990 levels by 2030.