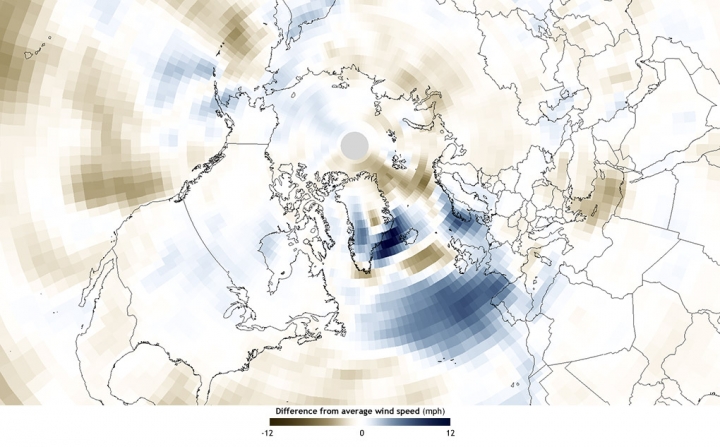 Think you had a rough winter? Just be thankful you don’t live on the coast of the North Sea.

The National Oceanic and Atmospheric Administration has whipped up a map of wind anomalies from January-February. During that period, a remarkable 20 storms with hurricane-force winds (classified as winds in excess of 74 mph) formed in the region.

The mark those storms left on global average wind speeds is apparent. While the U.S. looks fairly calm, you can clearly see the line storms took again and again toward western Europe. Those darker blues indicate areas with wind speeds that were as much as 12 mph higher than the 1981-2010 average.

For the period from October through March 8, a total of 43 hurricane-force storms have lashed the region. Normally these storms stay closer to Greenland where their impacts are minimal. However, this year thanks to changes in the tropics, they steered south and brought high winds, powerful storm surges, and heavy rain to Germany, the U.K., Belgium, and other countries sitting along the North Sea.

The U.K. Met Office recently issued a report on the series of storms in December and January that said, “For England and Wales this was one of, if not the most, exceptional (two month) periods of winter rainfall in at least 248 years.”

No attribution studies have been performed yet to see if these storms are tied to climate change. The Met Office report indicates that this year’s unusual storm track was, in part, driven by heavy rains thousands of miles away in the western tropical Pacific. That rainfall helped the jet stream steer more winter storms right over Europe.

But according to the report, recent research suggests that Atlantic storms that track further south will also become more intense and carry more moisture as the planet warms.

This year’s total of hurricane-like storms has already surpassed last year’s total of 41. The season runs through the end of March, though these types of storms can form into April, so there’s still a chance another could strike and drench more of Europe.