The globe recorded its fourth-warmest year on record in 2013, adding to the unbroken streak of 37 consecutive years with above-average global temperatures, according to new data released on Tuesday by the National Oceanic and Atmospheric Administration (NOAA) and NASA.

Separately, NASA ranked 2013 as the seventh warmest year. The agencies use different methods for analyzing temperature data, resulting in different rankings, but the numbers behind the rankings are within fractions of a degree of one another, said Gavin Schmidt, a NASA climatologist. 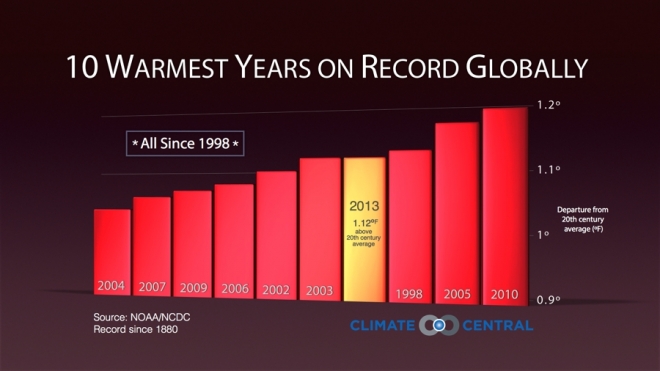 Several stark facts stand out from the new data regarding the planet’s long-term warming trend, which scientists have tied largely to increasing amounts of greenhouse gases in the air due to human activities like burning oil and coal for energy. The amount of carbon dioxide — the main long-lived greenhouse gas — in the air hit record highs in 2013.

The last year with an annual average temperature below the 20th century average was 1976, according to the NOAA. All 13 years of the 21st century have ranked among the 15 warmest in the 134-year period of record, with the top three being 2010, 2005, and 1998. Even considering the margin of error, NOAA said that 2013 was “more likely than not” among the top 5 warmest years on record.

Recent climate projections call for an El Niño event to develop during the second half of 2014, which could ensure that 2014 and 2015 eclipse last year on the list of top five warmest years. Although such events can help boost or hold back global average temperatures slightly from year-to-year, over the long-term the climate has been warming over time at similar rates during El Niño and non-El Niño years, Schmidt said.

Warming of the planet has slowed in the past 15 years or so, Schmidt said, likely due to a combination of natural climate variability and manmade air pollution that can help reflect some incoming sunlight.

The globally averaged annual combined land and ocean surface temperature was 1.12°F above the 20th century average of 57°F, NOAA said. Most land areas around the world had above-average temperatures during 2013, with a notable exception being much of the Central U.S., where it was cooler than average. No region of the globe was record cold for the year. Australia, however, set a record for its hottest year.

The year featured numerous extreme weather events that caused billions in damage and killed thousands, from monsoon-related flooding in India to extreme heat in Southeast China and Thailand, as well as the devastation wrought by Super Typhoon Haiyan in the Philippines.

On the other hand, parts of Africa experienced severe drought. Both drought and flooding affected northeastern Brazil in 2013, when the worst drought in 50 years gave way to the wettest December on record, along with widespread flooding.

Globally, though, precipitation across land areas turned out to be near average.

Climate change projections show that over time, the higher latitudes are getting wetter, while the subtropics are getting drier, but year-to-year variability can mask those trends. In addition, precipitation extremes are becoming more likely in many areas, particularly heavy rain and snow events, as the air is now carrying more moisture than it used to due to higher air and ocean temperatures.