The Overlooked Risk of Levees As Rainfall Rises

Thousands of miles of levees stretch across the U.S., built to keep swollen waterways from inundating towns, farmland and critical infrastructure. But, as the residents of Pocahontas, Ark., found out this week when drenching rains caused the Black River to overtop and breach the local levee system, living behind a levee is not an absolute guarantee of protection.

The river’s waters rushed over the earthen berm, spreading out over six miles and sweeping into homes, turning roads into rivers and likely causing millions of dollars in damage. 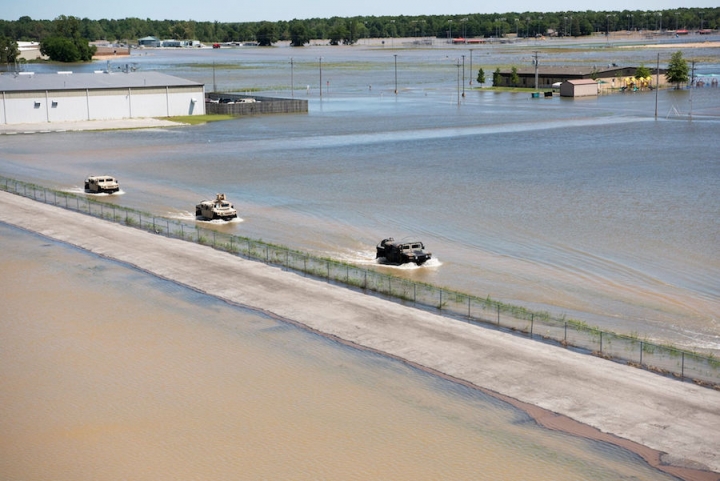 The event is one of many in recent years that underscore the often overlooked flood threat that remains to communities even when levees are in place, experts said, particularly when the levees aren’t well maintained and communities lack the funds to fix them.

Not only that, but the extensive use of levees to control floodwaters can actually exacerbate flooding when they fail, as they did in Pocahontas. And the problem is only likely to get worse as climate change continues to cause more and heavier downpours.

As the atmosphere warms from the continued accumulation of heat-trapping greenhouse gases, it is able to hold more moisture, making heavy downpours more common. The top 1 percent of such downpours have increased by 60 to 80 percent in Arkansas since the 1950s, according to a Climate Central analysis.

Of the seven biggest flood crests along this stretch of the Black River, four have happened within the last 10 years.

The Pocahontas flood is “symptomatic of the problem we face that there are so many communities across the country that are not prepared for these massive rain events,” Gerry Galloway, a leading authority on levees and water management at the University of Maryland, said.

That lingering threat is causing some communities to rethink their approach to flood prevention and spurring a push to better communicate and plan for such risks.

The history of many areas behind levees is one of “build it and they will come,” said Nicholas Pinter, a University of California, Davis, professor of geology and expert in flood risks. Like many other low-lying areas, parts of the inundated areas of Pocahontas were developed over the last few decades, despite the risk of flooding should the levees be overtopped or fail.

When overtopping or a breach happens, the resulting flood is often worse than what would have occurred naturally because the levee raises water levels.

“It is an inevitable thing that the act of building a large levee raises water levels. It’s a catch-22,” Pinter said.

Flooding around Pocahontas, Ark., and other parts of Arkansas and Missouri can be seen in these before-and-after satellite images.
Credit: NASA Earth Observatory

Those higher water levels exert more pressure, so the flood comes in sudden rush, instead of a more gradual rise.

The power of such floodwaters is tremendous. “It rips the asphalt right off the roads,” Robert Criss, a geologist at Washington University in St. Louis who has studied flood risks, said.

With the Pocahontas flood, heavy rains over the preceding days caused waters in the Black River to reach nearly 29 feet on May 2; the levee was built to hold back 28 feet. The waters overtopped and breached the levee system in nine places, according to the Arkansas Democrat-Gazette.

About 50 homes were damaged or destroyed, according to local news station KAIT, and sections of highway were inaccessible. Despite flood evacuation orders prior the flood, some residents had to be rescued.

Those who build in areas like this are often unaware of the threat, with the levee providing a false sense of security. Pinter said he talks to people on a daily basis who don’t realize that they are still in a floodplain behind the levee and thought officials would more clearly warn them of such a threat.

The communication of such risk in terms of 100-year or 500-year floodplains is also problematic, Criss said, as such terms don’t mean much to most people.

And even when residents are aware of the risk, they often can’t do much about it. Many people in such areas lack flood insurance, some because they can’t afford it. Rural communities like Pocahontas also often lack the funds to maintain and repair levees.

The Running Water levee, as the system near the town is called, was originally built in the early 1900s, but fell into disrepair over the decades, with trees growing along it and animals burrowing into it, according to the Democrat-Gazette. The levee failed during flooding in 2008 and 2011.

The levee district that had disbanded in the 1960s for lack of funds reformed in 2010 and after some repair and raising the levee higher, the Army Corps of Engineers gave it a “minimally acceptable” rating in 2013. (A widespread effort to grade many of the nation’s levees came after the wake-up call of Katrina, Pinter said.)

“How many of the people in Pocahontas really understand that their levee was marginal?” Galloway said.

High waters in Reyno, #AR sweep this #cabin down the Current River and right into and under a #bridge. pic.twitter.com/peqmY4TFTE

And Pocahontas isn’t alone on that score. “There’s a lot of levees here that aren’t in good shape,” Galloway said, many of which aren’t covered or even monitored by federal authorities.

The growing realization of the lingering risk from levees is causing some rethinking of flood protection strategies in riverfront communities. This can include simply setting levees back from the river and installing parkland that is intended to flood and provide rain-swollen rivers some breathing space, as well as preventing development in flood-prone areas.

“There are certainly alternatives to building levees,” Pinter said.

Such strategies may be particularly important on larger waterways like the Mississippi, where levees and other river development have increasingly squeezed rivers into narrower and narrower channels and raised water levels. When heavy rains come, those rivers, which should be able to absorb heavy rains over a day or two, react more like small streams and are more prone to flooding, Criss said.

While levees can, and do, work well and have their place in the flood protection portfolio, what experts call “managed retreat” may become more common.

“I think you’ll see more of that,” Galloway said. But what he and others stress most of all is being aware that while “there’s a love of water that we all possess,” the desire to live near the water comes with a risk.

“Today is the day we start saying to people, ‘Understand what your risk is and don’t continue to carry that risk.’”

You May Also Like:
Spending Deal Overrides Climate Science on Wood Energy