The Explosive Growth of California’s Drought in 1 Chart

It didn’t seem possible, but California's drought just got worse. On Thursday, the U.S. Drought Monitor released new data that show every single inch of the state is now experiencing some form of drought.

Since mid-March, a sliver of California on its southeastern border was the lone drought holdout for the state. Even then, that section of the state was still considered abnormally dry according to the Drought Monitor. The section finally tipped into drought this week, and for the first time in 15 year-history of the Drought Monitor, the entire state is now in drought. 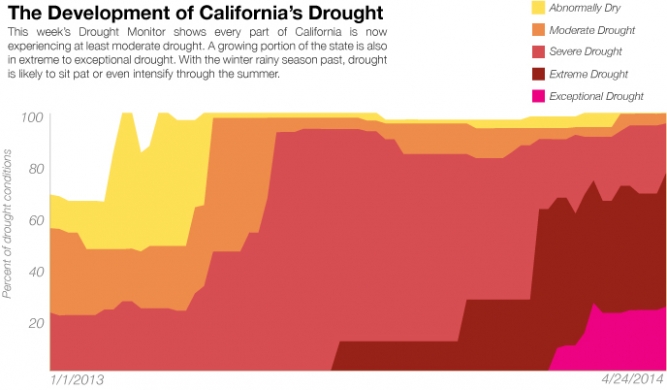 A persistent blocking ridge of high pressure is what kept California hot and dry all winter, which is typically the state’s wet season. What little snow that fell in the Sierra Nevada mountains, which acts as a natural reservoir through spring, declined precipitously in the past 10 days and could create further drought woes for the state. Melting snow can also contribute to tumultuous wildfire seasons by drying out the ground and vegetation that can feed blazes. That’s a daunting prospect for Californian’s and visitors to Yosemite National Park with last year’s Rim Fire still fresh on their minds.

Though parts of the state are receiving rain and snow on Friday, it’s unlikely to dent the drought. And with the rainy season basically done until late fall, the prospects for relief are scarce. That means drought conditions are likely to persist or could even worsen through the summer.