Climate change became an official Winter Olympic issue in 1998 in the wake of the Nagano Games. The four subsequent host cities, including Sochi, have made strides to address climate change and reduce or offset their greenhouse gas emissions. However, the Games and the athletes that participate in them have been unwittingly preparing for climate change over their 90-year history.

The wrap-up report for the 1998 Winter Olympics contained the first mention of climate change as it relates to the Games. The authors of the report said, “The depletion of the ozone layer and global warming are two examples of issues affecting our natural ecosystem on a worldwide scale. Therefore, striving to host the Olympic Winter Games in harmony with nature is especially important, and we ask the IOC and future Olympic Winter Games host cities to pay close attention to the environment.” 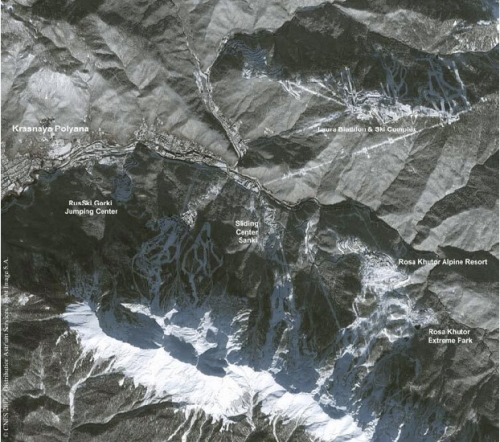 A satellite overview of Sochi's ski resorts that will host the Winter Olympic downhill skiing events. By the 2050s, conditions could be unsuitable to host the Winter Games in Sochi again.
Credit: Astrium GEO/Twitter

It could, of course, be argued that trying to put the Games in harmony with the environment is a fool’s errand. The Olympics involve massive construction projects, intensive use of water resources, and huge amounts of carbon emissions to fly in people from all over the world. Given that the Olympics aren’t going away soon, though, each organizing committee since Nagano has tried, in varying degrees, to limit their impact.

Sochi, this year’s Winter Olympics host, has already offset 360,000 metric tons of carbon. Organizers say that’s the amount of carbon emissions released through construction, athletes traveling to and from Sochi, and other actions directly related to putting on the Games (though there’s skepticism that it’s a realistic number).

And though offsetting 360,000 metric tons of carbon is notable for a single event, it’s barely a blip in the world’s carbon budget. That number is less than 0.01 percent of the total global emissions annually and a notch below the 2008 emissions for the entire country of Bermuda’s (which, incidentally, will be competing in the Sochi Games).

Rather than token gestures to cut emissions, the real lessons gleaned from the Olympics may date back to the first Games in 1924 in Chamonix. It was there, in a ski village in southeastern France, that organizers used weather insurance to prepare for the vagaries of mountain climates. Minimizing risks due to weather have been at the Games’ core ever since.

“The very first Games organizers in Chamonix knew if weather didn't hold up, people wouldn’t show up and they’d be left holding the bag,” said Daniel Scott, a global tourism professor at the University of Waterloo.

Though back then the Games weren’t the multi-billion dollar endeavor they are now, organizers still had to find a way to recoup the costs of putting on 16 events and hosting 258 athletes. Weather insurance offered one form to ensure they did, and each subsequent Games has adopted some form of it.

With climate change expected to raise temperatures by up to 7.9°F by the 2080s at the 19 previous Winter Olympic host cities, weather insurance could play an increasingly large role in insulating the Games from losses due to weather delays or cancellations.

Organizers at the 1932 Games in Lake Placid, N.Y. also tinkered with the formula for successfully managing weather risks by bringing hockey indoors for the first time. Though that didn’t become widely adopted until the Oslo Games 20 years later, it showed that indoor hockey could be done successfully. The 1960s is when technology started to become a larger part of staging the Games, though.

“The Olympics really started to adopt technologies from the 1960s on with refrigeration technologies being used for skating and bobsled and luge, as well as snow compacting becoming standard,” said Michael Hall, an expert in globalization and tourism at the University of Canterbury.

By 1980, when Lake Placid hosted the Winter Olympics again, organizers were tinkering with making snow on the alpine ski courses. The practice became commonplace after the 1998 Games in Calgary, and this year Sochi is boasting an armada of over 500 snowmaking guns, one of the largest in Europe.

Those adaptations have been crucial in bringing the Winter Games' to ever-warmer locales, including Sochi, which has more in common with 1996 Summer Games' host Atlanta than with most winter host cities. Yet while none of the changes were done specifically to address climate change, they will likely play a key role in ensuring the future of the Winter Olympics in a warming world. However, not every innovation is likely to stick.

Sochi organizers stashed 16 million cubic feet of snow from last winter under tarps in case of dry or warm conditions this year at the alpine venues (though it looks like it won’t be needed).

“I don't know that saving snow from year before will really catch on,” Scott said. “Other places will focus more on making snow. And what all Games now have to do is have two locations (for ski events): a primary location and backup location. That’s how they’re building in that resiliency.”

Scott said in the future, Games might have to rely more heavily on these backup sites, which are generally at higher elevations but further from the host cities. 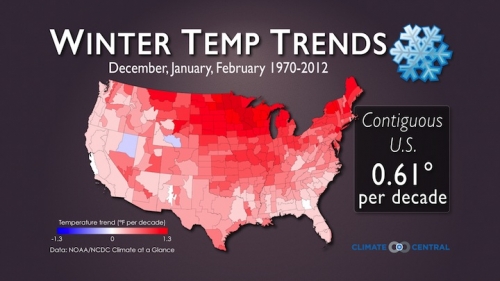 A map showing how average winter temperatures have increased in the U.S. since 1970.
Click the image to enlarge.

Advanced snowmaking equipment could also allow skiing and snowboarding events to go on even when temperatures climb above freezing. Technology currently in use at Zermatt, a resort in the Swiss Alps, relies on a machine called the Snowmaker. It was originally developed to keep miners in South Africa cool, and is water and energy intensive, but it’s not dependent on temperatures below 32°F. That kind of technology could conceivably become more valuable to organizers of future Winter Olympics as the climate continues to warm.

That includes in the U.S., where average winter temperatures have warmed 0.61°F per decade since 1970. Snow cover has decreased across the Northern Hemisphere over that same time period, but particularly in spring.

Those trends are likely to continue into the next century. Research presented at the American Geophysical Union Meeting in December that looked at 18 ski resorts in the western U.S. found that by 2080, temperatures are likely to increase at all resorts and snowfall is likely to decline by more than 75 percent at 10 resorts while increasing at only four.

Hall said an even bigger threat than a gradual rise in temperatures is the possibility for extreme weather event to increase in alpine resorts.

“Some resorts will undoubtedly have to improve their capacity to respond to flood events as well as extreme snowfalls and droughts,” he said.

Ultimately, most of those preparations will happen between the Games. But when eyes turn to the Winter Olympics every 4 years, they provide a platform for the world see how the future is developing right in front of our eyes.