The Ocean is Heating Up for Hurricane Season

If you live on the Gulf Coast or Eastern Seaboard, hopefully you’re ready for Atlantic hurricane season, which started on Sunday, June 1. As the season gets underway, hurricane-friendly ocean temperatures in the Atlantic are ramping up, though they’re not quite there in all places just yet. 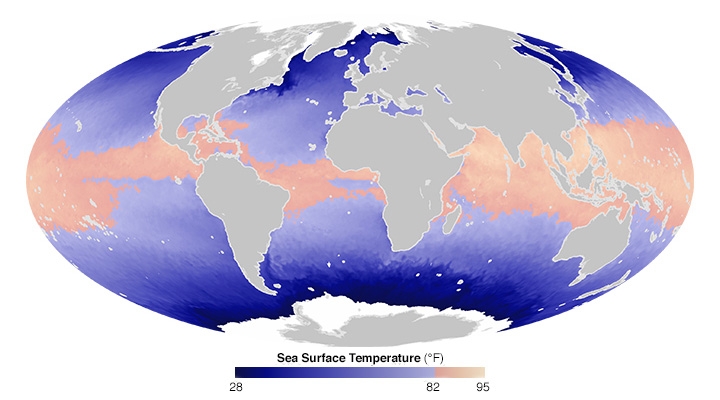 A map showing global sea surface temperatures for the end of May. Areas in red indicate temperatures above the threshold hurricanes generally need to develop.
Credit: NASA Earth Observatory

A new graphic from NASA’s Earth Observatory shows ocean temperatures at the end of May for the entire globe. For tropical cyclones, the broader label for hurricanes and tropical storms, to form, surface ocean waters generally need to be above 82°F, which is colored in red on the map. That helps fuel the evaporation that drives a hurricane’s convection engine and give storms a boost from a regular ol’ rainstorm into a full-fledged tropical cyclone. Temperatures below that threshold are shown in blue.

Large portions of the Indian Ocean and the western Pacific were above that threshold at the end of May, which reflects the fact that cyclone season never really ends in those areas.

However, the Atlantic is a different story. Hurricane-ready waters spread across the Caribbean to areas to the west of Africa. There’s still a fairly large area of cooler water stretching from the northwest coast of Africa across the Atlantic.

That’s notable because that region is one of the main places where Atlantic hurricanes form. Heck, it's called the main development region. All told, 60 percent of tropical storms and 85 percent of major hurricanes that form in the Atlantic basin are birthed here.

Of course that doesn’t mean it’s the only place tropical cyclones form. As if to prove that point, the first “invest” of the Atlantic season formed in the Caribbean on Wednesday according to Jeff Masters at Wunderground. An invest isn’t technically a tropical storm, but rather a disturbance meteorologists have flagged that could develop into something more.

Ocean temperatures are likely to warm as the summer progresses. But according to the seasonal hurricane forecast from the National Hurricane Center, they’ll be near-normal, which could limit hurricane activity.

There are a number of other climate factors that influence hurricane season as well. The climate phenomenon on the tip of everyone’s tongues, El Niño, can create conditions unfavorable for storms, as it is expected to this season. How deep warm water extends in the Atlantic basin also matters, because the deeper it goes, the more fuel storms will have to develop and strengthen.

However, sometimes more chaotic and surprising elements can come into play. That was the case last year when dust from Africa inhibited storm development and in part led to a near-record quiet hurricane season despite forecasts for a more active one.

With last year’s calm season, a record drought of more than 3,100 since a major hurricane made landfall in the U.S., and a slightly below-normal forecast for this season, it might sound like cause to not worry. But it’s worth remembering that it only takes one major storm to have an impact, as Hurricane Andrew showed during the 1992 season, an otherwise slow season to start.

It's also worth remembering that hurricane season has impacts beyond U.S. borders and that over the last three decades, hurricane seasons have changed. According to the recently-released National Climate Assessment, despite year-to-year variability, “the intensity, frequency and duration of North Atlantic hurricanes, as well as the frequency of the strongest hurricanes, have all increased.” Warmer ocean temperatures from a combination of natural variations and an increase in human greenhouse gas emissions are in part behind these shifts, though the exact contributions of each is an area of active research. What climate change could mean for future hurricanes is also an active area of research, but studies indicate that climate change is likely to contribute to more intense but fewer overall hurricanes in the Atlantic basin.

You May Also Like
How Will We Know When El Niño Finally Arrives?
Here’s How Much U.S. Summers Have Warmed Since 1970
EPA Aims To Slash Power Plant CO2 by 30 Percent
Hurricane Season’s Start Brings New Storm Surge Maps