The Human Fingerprints on Coastal Floods 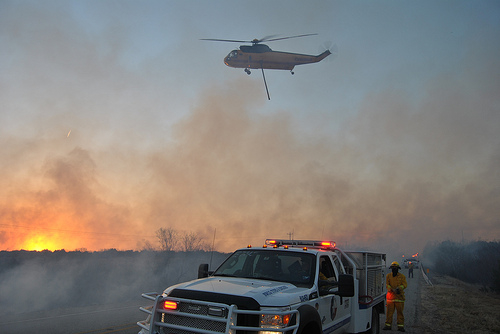 There are human fingerprints on thousands of U.S. coastal floods — and countless more the world over.

We have known for a long time that sea level is rising. The link to global warming has been both intuitive and evident. Temperatures rise, and satellites watch glaciers and ice sheets shrink; networks of robotic buoys sample ocean waters as they heat and expand.

We have also known that coastal floods are increasing. The link to sea level rise is clear. A higher starting level means that the same tide, the same storm surge, goes higher than it otherwise would have. Tide gauges dotting our bays and beaches have been recording this shift.

So far as I know, until now, no study has extended the links all the way from burning fossil fuels, to global warming, to sea level rise, to coastal floods that were caused unambiguously by us. But that is what collaborators and I have attempted to do in a new analysis.

Sea level change has a dizzying array of causes, not just global warming. In some places, land is sinking. In others, it is rising. People have pumped enough freshwater out of deep aquifers to swell the ocean, but also captured enough water behind dams to shrink it. Currents shift. Even gravity shifts, as ice sheets lose mass and tug the oceans toward them just a little bit less.

The result is a complex mosaic with different rates of sea level rise in different places. Since 1950, for example, we’ve seen parts of Chesapeake Bay rise by a foot, half that in Boston, and half that again in Honolulu. Amidst all this noise, new research led by Robert Kopp of Rutgers University, has extracted an essential signal: the amount of global sea level rise that has come from us.

For the 20th century, Kopp and his colleagues’ central estimate is global sea level has risen about four-and-a-half inches. Extended through 2014 for our follow-on report, the estimate increases to six inches. These don’t sound like world-changing numbers, especially considering that many sea level projections for the this century run beyond three feet. But if you live in Annapolis or Charleston, Atlantic City or Port Isabel, our analysis shows that those inches have already changed your world.

In our report, we took a simple approach. We subtracted yearly estimates for human-caused global sea level rise based on Kopp’s paper, from hourly water level records at 27 tide gauges around the United States. Then we compared how many days the water level exceeded the local threshold for nuisance flooding — with or without our subtractions.

Nuisance flooding is flooding that closes coastal area roads, overwhelms storm drains, and compromises infrastructure. It doesn’t wreck your home, but it could make it hard to get to work, or even to flush the toilet. The National Weather Service defines local nuisance flood thresholds based on decades of observing local impacts.

From 1950 through 2014, out of the 8,726 actual nuisance flood days that our analysis identified, 5,809 of them — two-thirds — would not have taken place if you remove Kopp et al.’s central estimate of human-caused global sea level rise. Even using a low estimate — one more than 95 percent likely to be too low — more than 3,500 of the flood days would not have taken place.

These totals represent just 27 tide gauges within the U.S.: 27 gauges that happen to have high quality hourly water level records since 1950. The true impact of human-caused sea level rise is much broader. And it has been sharply accelerating. Our central assessment indicates that within the past decade, human-caused rise tips the balance for 75 percent of floods study-wide, and for more than 90 percent of floods at sites ranging from Florida to San Diego, Seattle to Honolulu.

When a street floods with saltwater, and you can’t drive home, or you have to sandbag your store, human instinct looks for the nearby cause: it was a very high tide, or a strong wind blew from the wrong direction. But what if the tide or the wind were not enough to tip the balance? What if the waters would not have crossed the last lip, the critical threshold, without a few inches of boost?

Now we have looked into the pool of water gathered on the asphalt and found an uncomfortable answer reflecting back: the flood is us.

You May Also Like:
These Paintings Turn Climate Data Into Art
Weakening Ice Shelves Raise Sea Level Rise Concerns
Wildfires Are Burning Some of the World’s Oldest Trees
What Scalia’s Death Means For Climate Change