Continuing a more than 28-year unbroken streak of warmer-than-average conditions, August tied with 2005 as the fourth warmest such month on record worldwide, according to data released on Tuesday by the National Oceanic and Atmospheric Administration (NOAA). The last August that had a global average temperature below the 20th century average was August of 1978, and the last below-average global temperature for any month was February 1985, NOAA said. 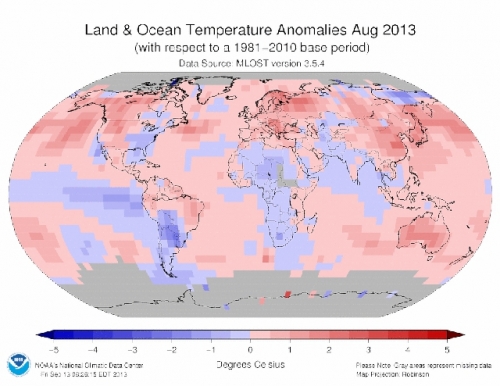 The globe recorded its fifth-warmest June-through-August period on record, and the average global temperature for the year so far ranks as the sixth warmest, tied with 2003, NOAA said.

Much of the world experienced above-average temperatures during August, particularly the Southern Hemisphere nations of New Zealand, which recorded its warmest August since records began in 1909, and Australia, which had its second-warmest August.

According to NOAA, no region of the globe was record cold or much cooler than average for the month, however, while far eastern China, part of Russia, and northeastern South America were record warm.

While global land temperatures ranked as the 11th warmest during August, ocean temperatures tied with several other years, including 1998 and 2005, for the warmest level on record for the month. The tropical oceans were relatively cool during August, according to NOAA data, but outside of the tropics and in both the northern and southern hemispheres, ocean temperatures were record warm. Hot spots included the Barents Sea in the Arctic, portions of the western Pacific Ocean, and parts of the south central Indian Ocean.

In this way, El Niño events can push an already warmer-than-average year over the hump and into the top spot.

One of the remarkable things about the climate of the past few decades is that even years when the cooling influence of La Nina events took place, they have still been much warmer than average. A string of La Niña events since 2000 has likely helped dampen global temperatures slightly, thereby slowing the increase in global temperatures. Despite the La Niña events, though, the past several years have still been among the warmest on record.

NOAA’s Climate Prediction Center is projecting the continued absence of El Niño or La Niña conditions, otherwise known as “ENSO-neutral” conditions, into the Northern Hemisphere winter months, which would suggest that global average surface temperatures will probably remain shy of record warm levels through the end of the year. The last record warm January-to-August period occurred in 2010, when warm El Niño conditions were last present.

August brought several extreme weather events around the world, including the worst flooding in more than a century in far eastern Russia near the Chinese border, and Typhoon Trami, which brought heavy rain to the Philippines, Taiwan, and China.