The Climate Context Behind the Deadly Arizona Wildfire

The deadly Yarnell Hill Fire continued to rage out of control on Monday, a day after the flames fanned by erratic winds and temperatures topping 100°F overwhelmed a team of elite firefighters, killing 19 of the 20-member crew. The fire has burned about 200 homes and has burned through at least 8,400 acres — more than quadrupling in size since it began on June 28, according to news reports.

A lightning strike is the suspected cause of the blaze, and a brutal heat wave in the West, combined with bone-dry conditions, likely aided its spread. The high temperature at Prescott on Sunday was in the triple digits. The forecast for Monday called for high temperatures to hover near the century mark, with continued low humidity.

Thunderstorms near the fire are a suspected cause of the erratic behavior of the flames on Sunday, when the firefighting crew was forced to deploy their last-resort fire shelters to try to deflect the flames.

The Yarnell Hill fire, like other wildfires in the West right now, is taking place in the context of one of the most extreme heat waves on record in the region, as well as a long-running drought. While the contributors to specific fires are varied and include natural weather and climate variability as well as human factors, such as arson, a draft federal climate report released in January found that manmade climate change, along with other factors, has already increased the overall risk of wildfires in the Southwest. 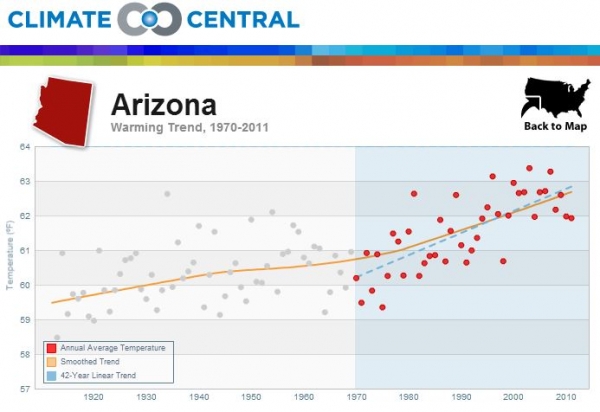 In Arizona, the current drought, combined with the regional heat wave, has created extremely dangerous wildfire conditions. Three quarters of the state of Arizona is experiencing “severe” to “exceptional” drought conditions, according to the latest U.S. Drought Monitor. In neighboring New Mexico, conditions are even more dire, with about 45 percent of the state experiencing “exceptional” drought, the worst-possible category.

Long-running precipitation deficits, including a below-average winter snowpack, have led to extremely dry soil moisture conditions in Arizona and New Mexico, in particular, and in other states across the West.

In recent years, the Southwest has trended toward drier and warmer conditions, which is consistent with climate-model projections that show that the region may become more arid in the coming decades, due in large part to manmade global warming. In fact, Arizona was the fastest warming state in the contiguous U.S. since the mid-1970s, with average surface temperatures increasing by 0.72°F per decade since 1970.

Other contributors to wildfire trends include the consequences of decades of fire-suppression policies, which have left many forests with large amounts of vegetation to serve as fuel for wildfires. Another factor is population growth, and more specifically, development that has taken place at the edge of areas that have a history of wildfires, known as the “wildland-urban interface.” 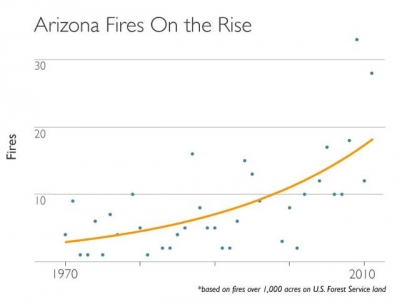 Due to a combination of drought and record heat, 2012 saw one of the most destructive wildfire seasons on record, with 9.3 million acres going up in flames, the third-highest since 1960.

While individual heat waves have ties to short-term natural weather variability, increasingly common and intense heat waves are one of the most well-understood consequences of manmade global warming, since as global average surface temperatures increase, the probability of extreme heat events increases by a greater amount.

The heat this week poses a formidable obstacle for firefighters, since it affects wildfire behavior as well as human health. Heat is the No.1 weather-related killer in the U.S., according to the National Weather Service.

Editor's Note: This story has been updated to incorporate one more year's worth of temperature data in the U.S.