Average summer temperatures in the Eastern Canadian Arctic during the past 100 years are hotter than they have been in at least 44,000 years, and possibly as long as 120,000 years, according to a new study. The study of mosses emerging from beneath receding glaciers on Baffin Island — the world’s fifth-largest island located west of Greenland — confirms that rapid Arctic warming has already put parts of the region in new climatic territory.

Arctic warming is transforming the Far North by melting sea and land ice, speeding spring snowmelt, and acidifying the Arctic Ocean. Arctic warming may even be redirecting the jet stream in the northern midlatitudes, making some types of extreme weather events more likely in the U.S. and Europe. 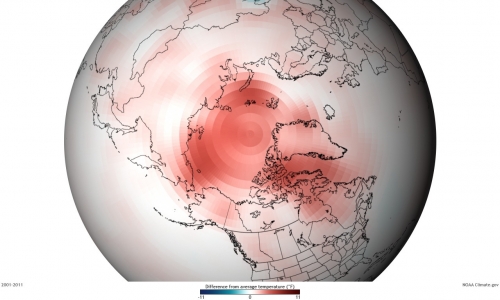 Departure from average of Arctic surface temperatures during the first decade of the 21st century, as compared to the 1971-2000 average. The map illustrates that no part of the Arctic experienced cooler-than-average conditions during this period.
Click image to enlarge. Credit: NOAA

On Baffin Island, glaciers have been receding approximately 6.5 to 10 feet per year, and they are likely to be gone entirely within the next few centuries if current trends continue, said lead author Gifford Miller of the University of Colorado at Boulder.

The new research, published in the journal Geophysical Research Letters, is the first to present physical evidence that indicates the warming in the Eastern Canadian Arctic exceeds the peak warmth during the Holocene epoch, which began after the last Ice Age ended about 11,700 years ago.

That's significant because it means that manmade emissions of greenhouse gases have pushed the climate in this part of the world beyond the previous, naturally driven warm period, when incoming solar energy during the Northern Hemisphere summer was about 9 percent greater than it is today.

Miller said he and his colleagues were “shocked” by their findings. They knew the climate of Baffin Island was warming, and that it was warm during a previous period of the Holocene, but, Miller said, “in our minds it was unlikely that the contemporary warmth had exceeded the previous warm period.

“Our data pretty clearly demonstrates that the observed warming now exceeds any plausible explanation by natural variability,” Miller said in an interview. “There is no other explanation that anybody has put forward outside of greenhouse gas emissions that can possibly meet what we’ve observed.”

The valuable insight into the Arctic climate came from an unlikely source — clumps of long-dead and concealed moss that is now emerging from retreating glaciers, after having been killed and entombed under the ice when it first formed.

Miller and his colleagues used radiocarbon dating techniques to gain insight into two key indicators of climate history. First, the moss indicated when, after earlier ice-free periods, the snowline dropped below the observation site and remained there, killing the plants. In other words, the moss showed when it first got cold. 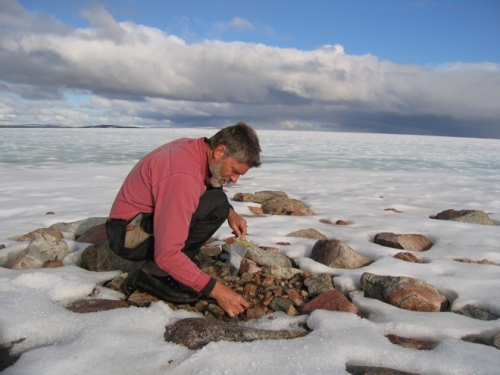 Second, the dated samples informed researchers as to when a given site was last ice-free, which was also the last time when summer temperatures at the same site would have been as high or higher than when the plants were last alive, Miller said.

The scientists gathered their samples over three field seasons between 2005-2010, ultimately dating 145 of the samples. The scientists found that at four small summit ice caps, rooted vegetation exposed by the shrinking ice cover pre-dated the Holocene period, dating back all the way to at least 44,000 years ago, close to the 50,000-year limit of when radiocarbon dating techniques are considered reliable.

Because of the uncertainties in radiocarbon dating techniques, as well as information gleaned from climate records from nearby Greenland, the study found that the last time summer temperatures “were plausibly as warm as present” is about 120,000 years ago.

“We never even in our wild imaginations thought we’d be getting dates that were at the limits of radiocarbon” dating techniques, Miller said. “It challenges our whole paradigm.”

The study also found that summer temperatures in the Canadian Arctic cooled by about 5°F between 5,000 years ago and 100 years ago. That cooling was likely driven by small changes in Earth’s orbit, and it was greater than estimates from the updated computer models used for the most recent U.N. Intergovernmental Panel on Climate Change (IPCC) report, Miller said. This may indicate that the models are also underestimating the amount of warming that will take place in the Arctic in response to manmade greenhouse gas emissions, Miller said, because the Arctic climate system contains feedbacks that can accelerate warming and cooling, a phenomenon known as “Arctic amplification.”

Rapid Arctic climate change has resulted in a steep decline in Arctic sea ice cover, with 2012 setting the record for the lowest ice extent since satellite observations began in 1979. The plunge in sea ice is helping to boost ocean and air temperatures by exposing greater areas of dark, open ocean, which absorbs more incoming solar radiation than the brightly colored ice does.