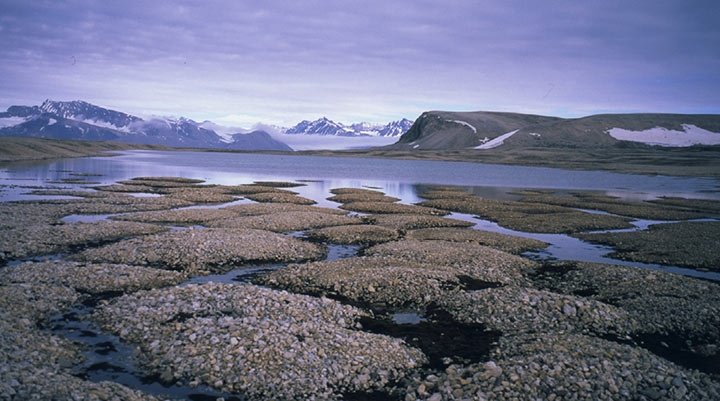 The Arctic holds more than a trillion tons of carbon, locked in the frozen soil known as permafrost. That’s more than twice as much carbon as there is in the atmosphere itself, according to a 2013 report from the National Academy of Sciences. And as the climate warms under its growing blanket of human-generated greenhouse gases, thawing permafrost could release some of that carbon into the atmosphere.

That could amplify the effect of global warming by boosting CO2 levels higher than they would otherwise be in a so-called feedback loop and making the consequence of warming, including rising seas, more intense and prolonged heat waves and droughts and distorted weather patterns even more severe. They could also lead to more thawing of permafrost and the release of even more CO2, starting the cycle again.

How much carbon will be released, however, and how much extra warming is likely to result, has been a matter of dispute in recent years. Some researchers have argued that that the effects will be horrific, while others say they’ll be significant but less dramatic. And now, a new report in Nature — the most comprehensive study ever done on the permafrost feedback loop, has come down firmly in the “significant” camp. “The permafrost carbon is not going to explode into the atmosphere catastrophically within just a few years,” Ted Schuur, a permafrost expert at Northern Arizona University, said. “It’s more like it will seep out slowly in small amounts in a very large number of places.”

Those small emissions, however, will add up, By the end of the century, they would add up to between 60 and 80 parts per million (ppm) of carbon dioxide or its equivalent in methane, a more powerful, albeit more short-lived greenhouse gas. That would add nearly 10 percent to the 800 ppm of CO2 that could be in the atmosphere by the end of this century. The 800 ppm alone could warm the planet by as much as 8.6°F above global temperatures during 1986-2005, according to the Intergovernmental Panel on Climate Change (IPCC). The extra CO2 released by thawing permafrost would just make things worse.

While IPCC scientists were aware of the potential for permafrost emissions, the organization didn’t factor them into most recent major report. “The estimates from earlier studies were so uncertain and unreliable that the IPCC wisely chose to leave them out,” said Terry Chapin, a professor of ecology at the University of Alaska, Fairbanks. Chapin was not involved in the Nature paper.

The reason earlier estimates of the permafrost feedback effect have varied so dramatically, Schuur said, is that they’ve been based on studies of very limited areas. “When you’re doing fieldwork, you’re limited by logistics to one place. And if you’re in the lab, you’re limited to samples from a certain region, or or thinking about methane but not CO2. It reminds me of the story of the blind men and the elephant.”

“This is a very highly qualified group of scientists, and a conservative group as well, and they’ve demonstrated very convincingly that thawing permafrost is a real concern.” - Terry Chapin

To describe this particular elephant in a comprehensive way, Schuur and his co-authors reviewed dozens of individual studies to paint an overall picture of how stored carbon is likely to emerge, and in what quantity. In thawing soils that lie near the surface, soil microbes tend to break down ancient, carbon-bearing plant material in a way that produces CO2; when the thaw happens in wet areas, such as in fens or at the bottoms of shallow lakes, the end product is methane, not CO2.

For the purposes of this study, the authors converted methane emissions to their CO2 equivalent in warming power, taking into account the fact that methane is far more efficient at trapping heat than CO2, but that it stays in the atmosphere for a much shorter time — years rather than centuries. Pound for pound, says the EPA, methane has more than 20 times the heat-trapping effect than CO2 over a century. (Methane emissions from human activities, meanwhile — from agriculture, and from leaks during the extraction and transportation of natural gas — are a major concern of climate scientists as well.)

“I’m very impressed with this paper,” Chapin said. “This is a very highly qualified group of scientists, and a conservative group as well, and they’ve demonstrated very convincingly that thawing permafrost is a real concern.” Chapin was not involved in the study.

Because thawing permafrost is likely to happen in small amounts across many hundreds of thousands of square miles of Arctic terrain, amounting to 24 percent of the land in the Northern Hemisphere, nobody is suggesting that there’s any way to limit these emissions directly. “Non-point-source pollution of this kind is a very tough challenge,” said Schuur, “and that’s exactly what this is.”

But since these natural emissions are triggered by the warming from human emissions in the first place, Schuur said, “refocusing on human emissions, which we do have some control over, is the best place to start.”

You May Also Like:
Watch 135 Years of Global Warming in 30 Seconds
The Future of Mountain Glaciers Is Bleak
Power Plant Rules Could Unite States On Climate Action
Can Climate Scientists Make A Difference by Not Flying?