Texas, the nation’s largest wind power producer, hit a major milestone in March when it produced more wind power in a given moment than ever before, according to a new Energy Information Administration report.

It may have set a national record for a state’s wind power production, too. 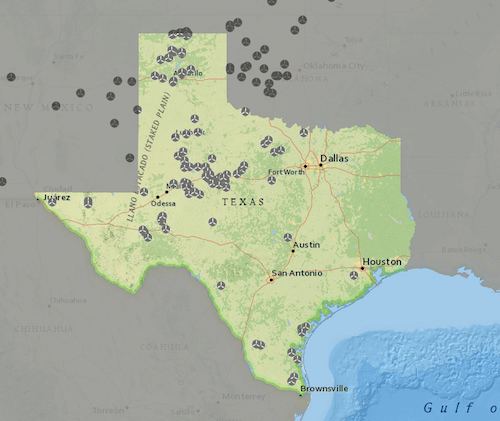 Texas' wind farms are concentrated mostly along the Gulf Coast in the Panhandle region, and in far West Texas.
Credit: EIA

The Lone Star State hit “peak wind” at 8:48 p.m. on March 26, when the state’s wind farms produced 10,296 megawatts of electricity. At that moment, wind turbines provided enough electricity to supply power for 29 percent of the total electricity load of the state’s main power grid.

Texas’ self-contained power grid, operated by ERCOT, the Electric Reliability Council of Texas, supplies power to all the state’s major cities — about 85 percent of the state’s electric power customers — except El Paso, Amarillo, Lubbock and those along Texas' eastern border.

Though the March 26 wind power output record supplied 29 percent of ERCOT’s load at that moment, wind power has provided for a larger share — up to 38.43 percent — of the load at times of low demand, EIA industry economist April Lee said.

“Texas leads the nation in wind capacity, more than double the next state (California), so it’s safe to say that no other state has come close so far,” Lee said via email. “The recent peak is generally indicative of the increasing amount of wind capacity across the United States and the need for grid operators to manage growing volumes of wind power on their systems.”

Texas has more than 12,000 megawatts of total wind power capacity, but its turbines have never produced that much electricity at any given moment. The March 26 output record beat a record set the previous week by a about 600 megawatts. Both of those blew past the state’s previous wind power record set in May 2013, when output reached 9,674 megawatts (one megawatt of wind power is enough energy to provide electricity to roughly 300 homes). 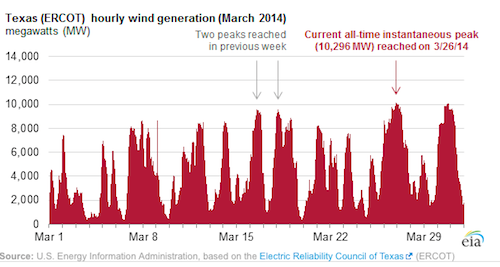 Total hourly wind power generation for Texas' self-contined power grid, the Electric Reliability Council of Texas grid, for the month of March 2014. On March 26, the state hit its all-time record for wind power generation, exceeding 10,000 megawatts in any given moment for the first time.
Credit: EIA

Lee said she does not have information about any nationwide wind power output record because many electric regions do not publish wind generation data publicly.

Though Texas is the nation’s largest wind power producer, it’s also the nation’s largest producer of crude oil and biggest emitter of greenhouse gases, mainly from power plants. Renewables rank third for electric power generation in Texas behind natural gas and coal, but ahead of nuclear.

One of the reasons Texas is seeing growth in consumption of wind power is the completion of major renewable energy transmission line projects in 2013.

Since 2008, when the Texas Legislature named 10 companies to complete the transmission projects by the end of last year as part of the creation of competitive renewable energy zones, approximately 3,600 miles of 345 kilovolt power lines were built connecting West Texas renewable power source with eastern Texas cities, said Robbie Searcy, spokeswoman for ERCOT.