Temperatures Are Soaring at the North Pole . . . Again

For the second year in a row, the Arctic is facing a late December heat wave (at least by Arctic winter standards). Temperatures are forecast to soar about 50°F above normal, which would bring them near the freezing point at the North Pole.

As isolated data points, the back-to-back winter warm-ups would be weird. But taken in the larger context, it’s part of an unsettling trend for a region that is being rapidly reshaped by climate change.

Warm air is forecast to invade the Arctic and persist through the next week.
Credit: Climate Reanalyzer

A quick recap: Arctic sea ice hit its lowest peak recorded in March (besting the record set in 2015), hit it second-lowest extent recorded in September, and started shrinking in November — at a time when ice should be growing — following a heat wave.

Just how much of a heat wave did the Arctic deal with in November? At the North Pole, temperatures in November averaged an astonishing 27°F above normal. Oh, and the Northwest Passage also opened up in August for good measure.

Which brings us to December. Warm air has been pouring into the region, but a truly unseasonable blast is forecast for the end of the week. Temperatures across much of the region will be anywhere from 30°-50°F above normal, with the warmest temperatures centered around the North Pole on the eve of Christmas Eve.

If you’re wondering where the cold air normally over the Arctic has gone, take a peek at Siberia. Bone-rattling cold will descend on the region, providing the weather equivalent of a lump of coal in thousands of people’s stockings.

The warm-Arctic, frigid-Siberia pattern is similar to what happened in November. The atmosphere is again set up in a way that’s funneling warm air into the Arctic via the Bering Strait and North Atlantic. There’s also been a ton of missing sea ice in the region — the result of what’s been a really abnormally warm year for the region all around. That’s left warmer ocean waters exposed, essentially helping lock in warmer-than-normal air temperatures as well. 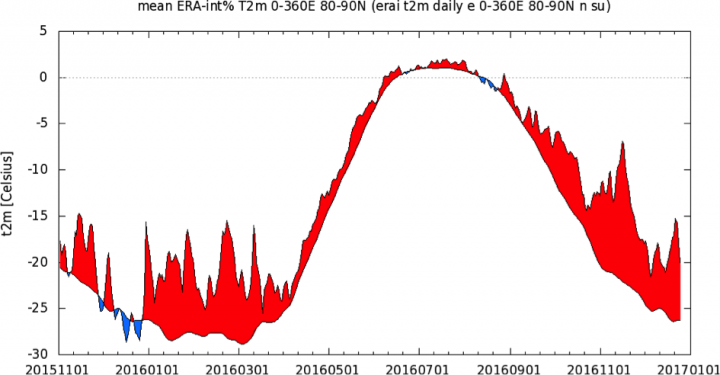 This year's Arctic temperatures compared to the average. Red represents above normal while blue represents below normal.

Scientists with the World Weather Attribution team, a group of research organizations worldwide that includes Climate Central, looked at the persistent warmth in the region from November through December to see if climate change has played a role. The answer is climate change made the current heat wave extremely likely. Though it’s still a rare event, climate change will continue to ratchet up temperatures in the Arctic (and around the world) to the point that this type of warmth will become commonplace in just a few decades.

Using peer-reviewed methods to tease out the impact of climate change, they found that the current heat wave is essentially a 1-in-50 year event. That makes it rare. But when they looked to see it could have occurred at the start of the 20th century — when temperatures in the region were about 4.5°F cooler — they found it was basically impossible for this type of warm streak to happen, writing that “the probability was so small it is hard to estimate.”

Friederike Otto, a climate scientist at Oxford who worked on this and other WWA analyses, said this one stood out for the massive role climate change played.

“In terms of the magnitude of change, this is a totally different picture than what we have seen before,” she said in an email. “Climate change really is the game changer here. (It) increased the risk of this event occurring by several orders of magnitude!” 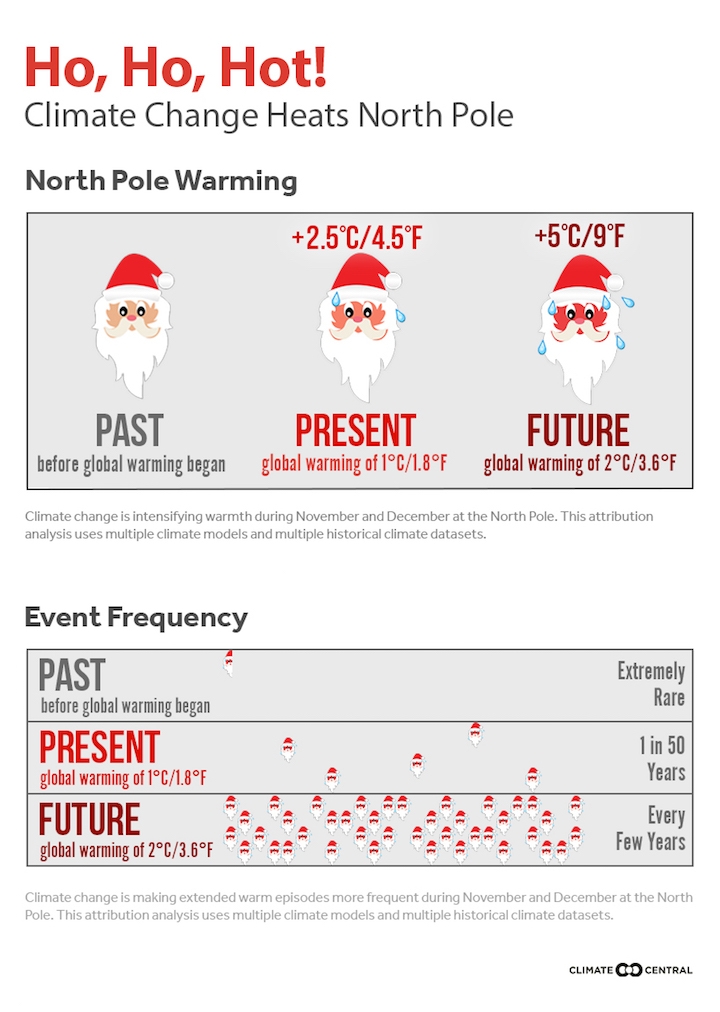 Climate change has made the current Arctic heat wave much more likely and could make it commonplace by mid-century.

Adding a further twist to this winter, the researchers also found that the Atlantic Multidecadal Oscillation, a sea surface temperature pattern that affects the region, was in a phase that generally helps keep the Arctic cooler. In other words, natural variations are likely keeping temperatures from spiking even higher in the region.

“The model analyses show that the event would also have been extremely unlikely in a world without anthropogenic emissions of greenhouse gases and aerosols, attributing the cause of the change to human influences,” they wrote.

Carbon pollution will continue to reshape the region and make these types of warm weather outbreaks more common. If human carbon emissions continue on their current trajectory, temperatures in the Arctic could reach a point where heat waves like this occur every few years by mid-century.

Winter warmth will likely cause a cascade of other effects throughout the region, ranging from reducing polar bear habitat to the death of old sea ice to more intense storms battering exposed coasts. Santa’s runway could also become a slushy mess and warm weather elsewhere could reshape critical ecosystems as well as weather in lower latitudes.