A recent slowdown in the upward march of global temperatures is likely to be the result of the slow warming of the deep oceans, British scientists said on Monday.

Oceans are some of the Earth's biggest absorbers of heat, which can be seen in effects such as sea level rise, caused by the expansion of large bodies of water as they warm. The absorption goes on over long periods, as heat from the surface is gradually circulated to the lower reaches of the seas. 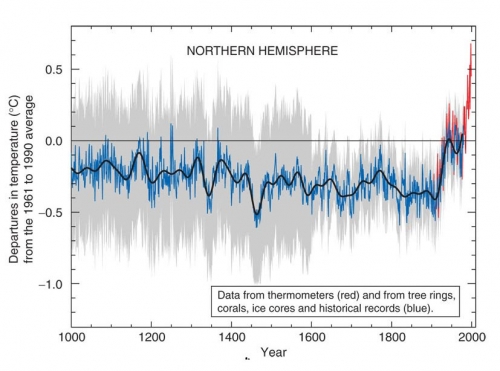 Temperature in the northern hemisphere since the year 1000.
Click image to enlarge. Credit: IPCC

Temperatures around the world have been broadly static over the past five years, though they were still significantly above historic norms, and the years from 2000 to 2012 comprise most of the 14 hottest years ever recorded. The scientists said the evidence still clearly pointed to a continuation of global warming in the coming decades as greenhouse gases in the atmosphere contribute to climate change.

This summer's heatwave, the most prolonged period of hot weather in the UK for years, has not yet been taken into account in their measurements.

Peter Stott of the Met Office said computer-generated climate models all showed that periods of slower warming were to be expected as part of the natural variation of the climate cycle, and did not contradict predictions. Given that variation, current temperatures are within expectations.

As well as the heating of the deep oceans, other factors have played a significant part in slowing temperature rises. These have included the solar minimum — when the sun is less active and generating slightly less heat, as occurred in 2008/2009 — and a series of small volcanic eruptions, including that of Iceland's Eyjafjallajökull volcano in 2010. Ash from volcanoes reflects light back into space, and major eruptions in the past have had a severe, albeit temporary, cooling effect.

Despite the slowdown in warming, by 2060 the world is still likely to have experienced average temperatures of more than 2°C (3.6°F) above pre-industrial levels — a threshold that scientists regard as the limit of safety, beyond which climate change impacts are likely to become catastrophic. Professor Rowan Sutton, director of climate research at the National Center for Atmospheric Research at Reading University, said the current pause would only delay reaching this point by five to 10 years.

The “pause” in the rise of global temperatures has been seized on by climate sceptics, however, who have interpreted it as proof that the science of climate change is mistaken. But despite the slowdown in warming, the warmest years on record were 1998, 2005 and 2010, according to the U.S. National Oceanic and Atmospheric Administration (NOAA).

Professor Sutton said more research was needed on the effects of warming on the deep oceans, as observations of deep ocean temperatures have only been carried out in detail over the past decade and more are needed. Higher temperatures could not only have a devastating effect on marine life, he said, but could also contribute to increases in sea levels as sea water expands.

The Met Office warned early in the summer that the UK could be in for a decade of “washout” summers, like those of the past six years, because of the effect of climate change on global weather systems, partly as a result of changes in wind patterns caused by the melting Arctic.

But no sooner had the meteorologists made their prediction than the weather bucked this trend, with a shift in the Atlantic's jet stream air circulation system giving rise to high-pressure weather fronts and a long period of settled sunny weather.

Related Content
Heidi Cullen’s Senate Testimony on Climate Science
Why Global Warming Slowed in the 2000’s: Another Possible Explanation
The Heat is On: U.S. Temperature Trends
The Keeling Curve (Graphic)