Switch to Gas From Coal May Threaten Water Supply

With drought and water shortages affecting areas where much of America’s natural gas is produced, power plants making the switch to gas from coal could have other costs that may be made worse by manmade climate change. This is especially true if global warming, as studies show, intensifies drought. 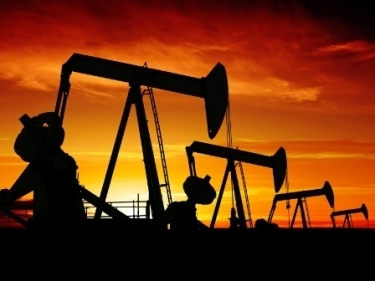 One of those costs is water. Natural gas is primarily produced after shale oil and gas wells are hydraulically fractured, or fracked, often using millions of gallons of water for each well.

Take south Texas’ Eagle Ford shale, one of thirstiest natural gas fields in the U.S., where high water demand from the oil and gas industry is adding strain to already stressed water supplies.

Drought, exacerbated in part by a changing climate, has been plaguing south Texas since 2010, culminating the following year when more than 4 million acres across the state burned in drought-fueled wildfires. Though it’s not as severe, the drought there continues today.

A broad swath of counties sitting atop the Eagle Ford shale south of San Antonio, Texas, are collectively becoming one of the biggest oil and gas producing regions in the contiguous U.S.. The Eagle Ford shale is also among most water intensive oil and gas fields in the country, consuming 19.2 billion gallons of water between Jan. 1, 2011, and May 31, 2013, and where the average fracked oil and gas well uses 4.5 million gallons of water, according to a report released this month by the nonprofit group Ceres.

That’s a lot more water than Texas’ other major oil field in the Permian Basin around the cities of Midland and Odessa, where during the same period, oil and gas wells used 10.4 billion gallons and an average of 1.1 million gallons of water are used to develop each well, according to the report.

Like many other oil and gas boom areas in the country, the shale gas boom ramped up fast after energy companies began drilling in 2009. The U.S. Energy Information Administration forecast production in the Eagle Ford to reach nearly 1.3 million barrels of crude oil per day and 6.2 billion cubic feet of natural gas per day in February. In 2009, natural gas production was 5.8 million cubic feet per day and crude oil production was only 340 barrels per day.

That boom has made the region Texas’ largest consumer of water with a peak annual water demand of 11 billion gallons, according to the report. Yet, that oil and gas production frenzy is occurring in an area of extremely high water stress because of ever-increasing water demand and drought depleting underground water resources, Ceres reports.

Much of the water comes from underground aquifers that are seeing their levels depleted by hundreds of feet, making the availability of water in some counties uncertain, said report author Monika Freyman, senior manager of Ceres’ water program. 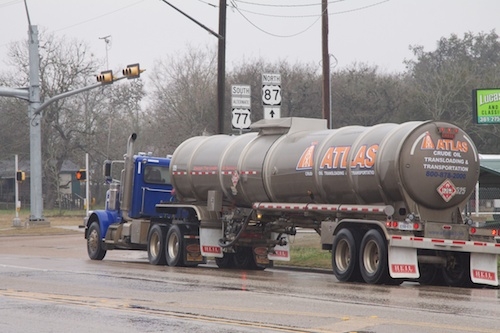 Crude oil production is booming in the Eagle Ford shale south of San Antonio, Texas, where oil and gas servicing trucks such as this one in Cuero jam small town streets on their way to and from oil and gas fields.
Credit: Bobby Magill

Those counties have seen groundwater depletion from decades of overuse, and the fracking boom in the region is adding a new layer of water demand, stressing water supplies further, she said.

The patterns of energy development in south Texas are changing, though. An EIA report this week shows that energy companies are hard at work exploiting the Eagle Ford shale primarily for its oil, though natural gas production is also the rise there.

Wells in south Texas often produce both oil and natural gas, but because of high oil prices and low natural gas prices, crude oil, which generally consumes less water to develop, is king in the Eagle Ford right now.

What that might mean for long-term water stress in south Texas isn’t clear, but more information needs to be available about how the energy development there will affect water supplies, Freyman said.

“We need more disclosure about where that (development is) expected to take place, and what the future water requirements will be, where’s the water going to come from and if it’s sustainable,” she said.

For now, drought conditions in south Texas aren’t slowing the energy boom in the Eagle Ford. Just in the span of a month, production of both oil and gas are forecast to continue their climb, jumping 34,000 barrels of oil per day and 123 million cubic feet of natural gas per day between February and March.