On a clear day, anyone flying over Greenland on the route between North America and Europe can look down and see the bright blue patches of melted water atop the flat, blindingly white expanse of the ice sheet that covers the island, the second largest chunk of ice on Earth.

Scientists have long known this meltwater flows in streams along the ice sheet’s surface before disappearing down chutes that take it tumbling to the bottom of the ice sheet, where the ice scrapes against bedrock. 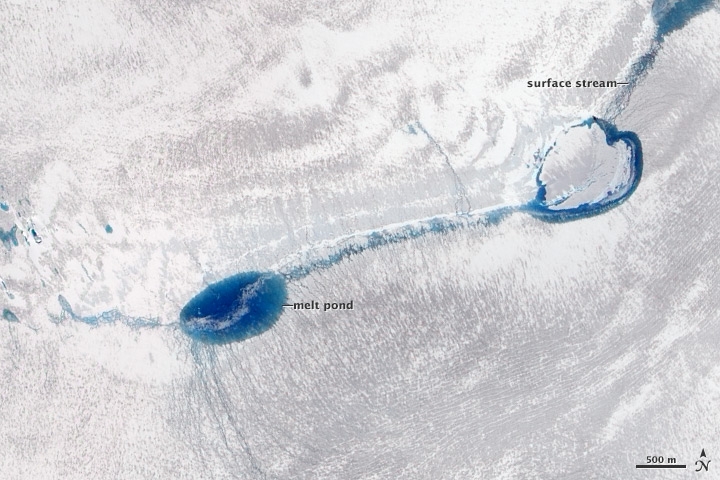 Melt ponds on the Greenland ice sheet seen by satellite in the summer of 2010.
Credit: NASA

It was thought that the water quickly flowed between ice and rock and out to sea, with little impact on the bottom ice layers. But a new study suggests the story isn’t so simple. In a serendipitous discovery, a team of scientists has found a lake at the bottom of the ice where the relatively warm meltwater pools and makes the ice around it slushier. Ultimately, that could make the ice flow faster to the ocean.

The finding, detailed in the Jan. 22 issue of the journal Nature, suggests that this process could be important to more accurately modeling how Greenland will respond to climate change and contribute to the already 8 inches of global sea level rise since 1900. Greenland holds enough ice to raise global sea levels by 24 feet, and how much and how quickly it melts could change projections of future sea level rise, which the Intergovernmental Panel on Climate Change puts between 10 and 32 inches by 2100, including contributions from Greenland’s glaciers.

‘What The Heck Is That?’

As happens so often in science, Mike Willis wasn’t actually looking for what he ended up discovering. The glaciologist was combing through satellite and GPS data to see what small, local effects could be clouding satellite measurements of larger changes in Earth’s gravity from ice loss.

What he did not expect to find was a hole twice the size of Central Park in a small ice cap in the northern reaches of Greenland.

“What the heck is that?” he thought when he saw it.

He didn’t think he could possibly be the first person to have spotted it. “Surely someone’s noticed a gigantic hole in northern Greenland before,” he said, but there were no records of it.

Trying to guess what it could be, he and his colleagues ruled out a meteor crater, a volcano, and, as they joked, Dr. Evil’s sub-ice lair. Ultimately, “the thing that fits it best is that it’s a subglacial lake,” he said.

Such lakes of water pool at the bottom of an ice sheet or glacier, and were known to be scattered under parts of Antarctica. But they hadn’t been found yet in Greenland.

Looking through satellite data going back to the 1970s, Willis couldn’t find any sign of the hole until 2006. At that point surface water in the area was flowing in an unexpected direction and disappearing down a moulin right in the spot Willis was looking at. That flow pattern repeated every few years, and then in 2011, “Boom! A big hole appears in the place where the water disappeared,” he said. 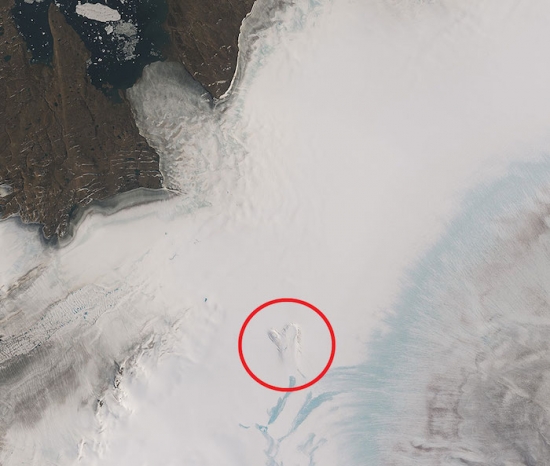 A mitten-shaped depression in the surface of an ice cap in northern Greenland marks the spot where a lake sit below the ice. The rapid emptying of the lake cause the ice above to slump down and make the depression.
Click image to enlarge. Credit: NASA/USGS

Willis, who has dual appointments at Cornell University and the University of North Carolina, and his colleagues determined that the meltwater was collecting in a subglacial lake below the hole, or really, a depression in the surface of the ice cap (shaped exactly like a mitten). That water collected until it was too much for space and the whole thing blew out, sending the water in a rush out to sea and causing the ice above it to slump downward.

“The lake underneath the ice went away and the ice surface dropped to fill that space,” Willis said.

Since then, remote observations show the surface depression has been rising, in part from surface meltwater flowing back into the lake and raising the ice. The major melting across the whole surface of the ice sheet in the record warm summer of 2012 caused enough water to drain down that the ice surface went “rocketing up” as much as 40 centimeters per day, study co-author Robin Bell, a climate researcher at Columbia University’s Lamont-Doherty Earth Observatory, said.

“They show clearly that . . . the surface melt must have contributed to the rapid rise, the refilling of the subglacial lake,” Joe MacGregor, a glaciologist from the University of Texas, who was not involved in the research, said. “No one’s shown that before.”

What Willis’s discovery suggests is that the meltwater that flows down from the ice sheet’s surface doesn’t have just a fleeting encounter with the base of the ice. Instead, “it pauses on its rush to the ocean,” Bell said, in the subglacial lake.

Because that meltwater has been warmed by the sun’s rays and the comparatively warm atmosphere, it is far warmer than the basal ice. The pause means the meltwater has time to transfer heat to the ice, making it “gooier,” in Bell’s words, and gooier ice is “going to flow faster in the long term,” Willis said.

The findings also back another recent study that found that the amount of meltwater flowing into the ice sheet didn’t match what was flowing out, suggesting it was being caught up somewhere in the ice.

MacGregor said the research “is a great step . . . in connecting the top and the bottom of the ice sheet.”

What’s left to figure out is whether this is happening with other subglacial lakes around the Greenland ice sheet, as well as whether and how to incorporate the findings into models that are aimed at gauging how much Greenland might change with the warming climate and how much water it could add to the rising seas.

You May Also Like:
Watch 28 Years of Old Arctic Ice Disappear in One Minute
Boston’s Got Gas as Methane Seeps from City
Heat Stroke, Anyone? Tennis Grand Slams Heating Up
Climate Change Moves the Doomsday Clock