Super Typhoon Neoguri is bearing down on Japan’s Ryuku Islands, a string of more than 100 islands that make up the southernmost part of the Japanese archipelago. The storm’s path could take it very close to the biggest of the islands, Okinawa, where the largest U.S. military installation in the Asia-Pacific region is located. 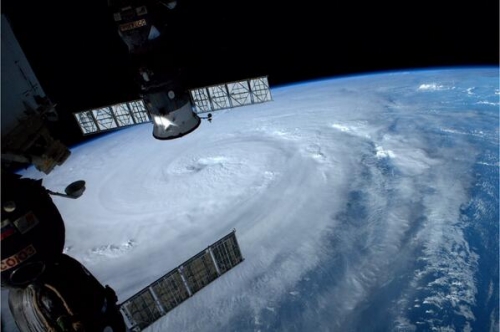 Astronaut Reid Wiseman snapped a photo of Super Typhoon Neoguri from his post on the International Space Station.
Credit: NASA

Neoguri was about 300 miles away from Kadena Air Force Base as of the 11 a.m. ET update from the Joint Typhoon Warning Center (or the JTWC, which is run by the U.S. Navy and Air Force) and had sustained winds of nearly 150 mph. While dry air has cut into the storm since that update, weakening it somewhat, there is a chance it could strengthen somewhat again before hitting Okinawa.

For those used to the storms that hit the East and Gulf coasts of the U.S., along with their terminology, Neoguri may be spurring a bunch of questions: Exactly what is a super typhoon and how is it different from a hurricane? Isn’t it kind of early in the season to see such a large, strong storm? (When is typhoon season anyway?) Climate Central has the answers for you:

Super typhoons are the same as strong major hurricanes

The swirling storms called hurricanes in the U.S., cyclones in Australia, and typhoons in Japan are all the same phenomenon (more generically known as a tropical cyclone). Each ocean basin has different, though sometimes overlapping, terms to describe the storms throughout their development, as well as different cut-off points to determine when storms reach the next level of strength.

For example, the National Hurricane Center in Miami, which monitors storms in the Atlantic basin, and the Japan Meteorological Agency and JTWC, both of which cover the Northwest Pacific, use the same terminology for weaker storms — tropical depression and tropical storm (though the JMA recognizes a sub-category of “severe tropical storm”). But when a storm’s sustained winds are above 74 mph, the National Hurricane Center uses the term “hurricane” and recognizes five strength categories with progressively higher wind speeds, while the JMA and JTWC use the term “typhoon.” It is the JTWC that uses the term “super typhoon” when a storm’s winds reach above 150 mph, as Neoguri’s have. A super typhoon is equivalent to a strong Category 4 or a Category 5 hurricane in the Atlantic. So Neoguri was packing quite a punch before dry air infiltrated it.

Unlike the Atlantic basin, which has a defined hurricane season (June 1 – Nov. 30), there is no official typhoon season. It’s basically always typhoon season in the Northwest Pacific, though activity definitely waxes and wanes through the year. Tropical cyclones depend on warm ocean waters to fuel the convection that drives them, so typhoon season hits its minimum around February, when waters are colder and less able to support cyclone development, and hits a maximum in the warm summer months, typically in August and September. 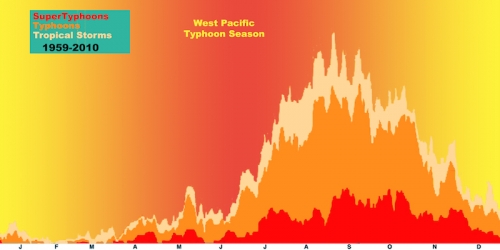 Storm activity in the West Pacific during the year, with a minimum in February and a maximum in August-September.
Credit: NOAA

While it’s July, “it’s not unusual at all to get a storm this strong this early,” said Adam Lea, a tropical storm researcher at University College London who helps write seasonal tropical cyclone forecasts with the Tropical Storm Risk consortium.

Storms are also helped along by some basic characteristics of the Pacific Ocean as compared to the Atlantic or Indian Oceans: “The NW Pacific typically sees a higher number of powerful typhoons given a larger body of water and more time to intensify,” said Steven Bowen, an associate director and meteorologist with the reinsurance group Aon Benfield.

Stronger storms that do form this time of year tend to be confined to more southerly latitudes and/or tend to curve out to sea. But unusually warm waters stretching up to Okinawa are keeping Neoguri with a steady fuel supply as it charges northward. Sea surface temperatures are a couple of degrees Fahrenheit higher than normal, Lea said. “There’s just a lot more heat content in the ocean for the storm to feed off,” he told Climate Central.

“It looks like it could be one of the stronger storms to affect southern Japan for awhile,” Lea said. (Super Typhoon Danas did clip the northern part of Okinawa last year, but hit in October.)

El Nino has the opposite effect on storms in the NW Pacific vs. the Atlantic

At the beginning of the 2014 Atlantic hurricane season, the National Hurricane Center forecast a somewhat below-average season in part because of an emerging El Nino. This cyclic climate phenomenon is characterized by warmer-than-average waters in the eastern tropical Pacific, which in turn affect atmospheric flow patterns. Patterns shift over the Atlantic so that there is more wind shear (or changes in the direction and strength of wind speeds with height in the atmosphere), which tends to quash hurricane development). 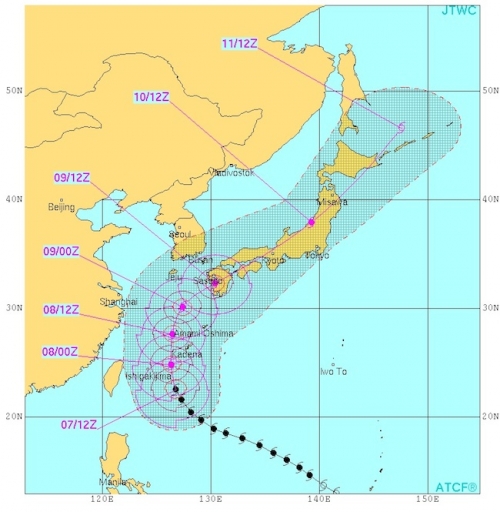 The expected path of Super Typhoon Neoguri through Japan's Ryuku Islands and later up to the main island of Kyushu as of the afternoon of July 7.
Credit: JTWC

In the Northwest Pacific, on the other hand, El Nino tends to lead to a more active typhoon season by relaxing trade winds and allowing storms to more readily spin up. Typhoons during El Nino years also tend to wander farther north in the Northwest Pacific, Lea said, though he attributes Neoguri’s possible hit on Okinawa more to random chance, given the small footprint of the island.

But “it is quite possible that the basic track (not necessarily the intensity) could be replicated again this year by other storms,” Bowen said in an email.

The appearance of such a large, strong storm like Neoguri doesn’t necessarily signal a busy season ahead or more major storms, as there isn’t much correlation between activity early in the season and activity during the season’s peak, Lea said.

While storm surge whipped up by Neoguri’s ferocious winds, as well as those winds themselves, are major concerns for coastal areas in the storm’s path, Japan’s mountainous terrain means that rainfall is also a major concern.

Mountains enhance rainfall as moisture-laden air is forced up over them, which means authorities in Japan are on the alert for flash flooding and mudslides.

The JMA has forecast that Okinawa could see up to 3 inches of rain per hour as Neoguri passes over, according to an article in Japan Today.

Just what the storm brings will depend on what happens in the next 24 hours, Lea said, including what path Neoguri takes and how much it recovers from today’s setback.