The shell of ice that covers the Arctic Ocean is nearing its yearly low point and projections suggest that it will be among the four lowest summer minimums on record. If melt rates are speedy enough, there’s a chance it could even take the number two spot, forecasters said Wednesday, as the ice continues its decades-long, warming-driven decline. 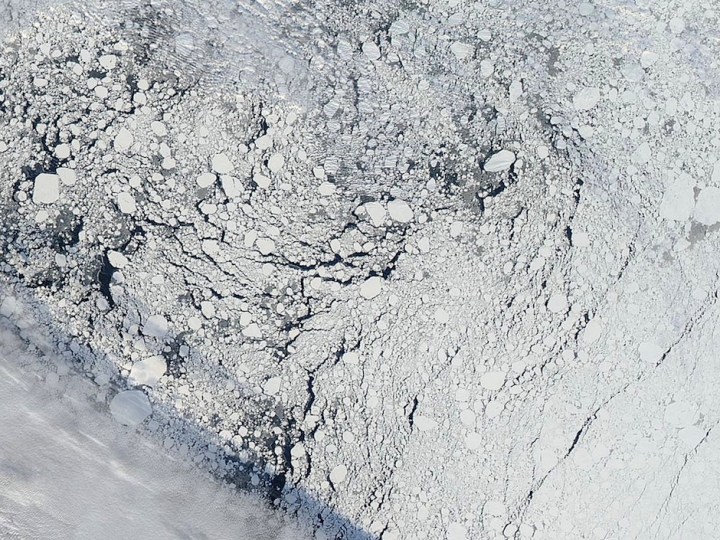 The Arctic sea ice pack north of Alaska in September 2013, as seen by the Aqua satellite.
Credit: NASA

The sea ice that caps the Arctic Ocean naturally waxes and wanes with the seasons, reaching its maximum area at the end of winter, before the reemergence of the sun in spring starts off the melt season. Sea ice area, or extent, usually hits its annual minimum in mid- to late-September.

The warming of the planet from the human-driven accumulation of heat-trapping greenhouse gases in the atmosphere is acting over this cycle, leading to overall declines in sea ice, with a particularly pronounced drop-off in summer numbers. Those declines range from 10 to 15 percent per decade depending on the season.

The melt of sea ice driven by warming, which also leads to a thinning of the ice, has major implications for the Arctic area. Wildlife like polar bears and walruses that depend on the sea ice can be hampered in their pursuit of prey, and the livelihoods of indigenous communities can be threatened.

This year’s summer melt has seen periods where melt surges ahead, followed by weeks where it levels off. The rate of melt can be affected by the weather in the region, with winds pushing sea ice around and high pressure systems bringing sunny weather that helps fuel melt.

Throughout August, sea ice melted at a steady clip, after a rapid decline in late July. While it’s uncertain exactly where the summer minimum will end up in a few weeks, forecasters can use the rates of decline from previous years (as well as those of recent weeks) to estimate a range of possibilities. 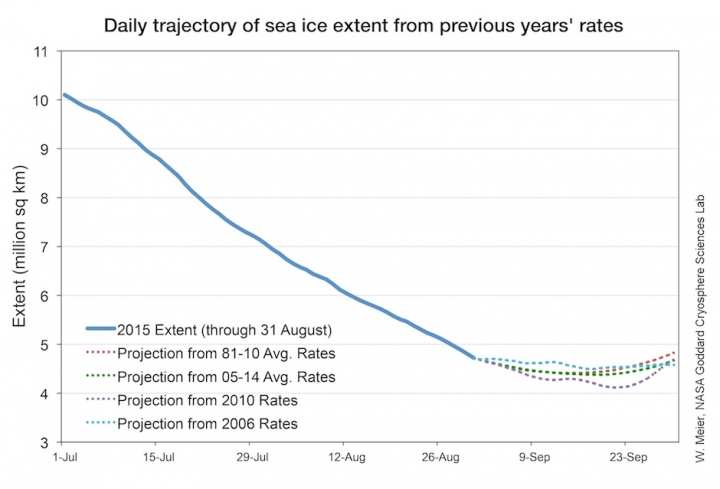 Forecasts for the 2015 summer minimum, based on ice extent as observed on Aug. 31, 2015, and past years’ observed rates for selected years.
Click image to enlarge. Credit: W. Meier, NASA Goddard Cryospheric Sciences Lab

Even if there were no further loss of ice this year, the amount of ice present right now would still replace last year as the sixth lowest extent on record. But since there will be additional melting, the most likely scenarios are for the fourth or third lowest extents, in that order, forecasters with the National Snow and Ice Data Center in Boulder, Colo., have said.

There is a small chance that this year could snag the number two spot from 2007, if melt follows the fastest rate of recent years, which it did for the last 10 days of August, the NSIDC noted.

The lowest extent on record came during the remarkable summer melt season of 2012, fueled in part by summer storms that moved ice into warm waters.

Nearly all sectors of the Arctic Ocean have had below average sea ice concentrations, with the exceptions of Baffin and Hudson bays (both to the north of Canada), where some higher concentrations are sitting in sheltered coastal areas, the NSIDC said.

The southerly route of the Northwest Passage — originally discovered between 1903 to 1906 by the Norwegian explorer Roald Amundsen — is currently open, and the Northern Sea Route along Russia has been open for most of the month. That route, along with the Arctic as a whole, has seen an uptick in ship traffic in recent years, and Russia has pushed aggressively into this frontier, including building up its icebreaker fleet.

During a visit to Alaska this week, President Obama called for more funding to beef up the U.S.’s own icebreaker capabilities, which currently stand at only two aging ships.

While the sea ice will begin its annual refreeze after the minimum, as it does every fall, the overall trend has been a steady decline that could lead to an ice-free Arctic in the summer in just a few decades, scientists have said.