Summer Heat Waves May be Linked to Arctic Warming

Before the summer of 2010, Moscow had never recorded a triple-digit temperature, with records going back to 1879. But during a weeks-long heat wave that June and July, the city’s temperatures soared well above normal, setting an all-time record high of 102°F on July 30. A new study suggests that Arctic warming could have helped trigger that epic heat wave. 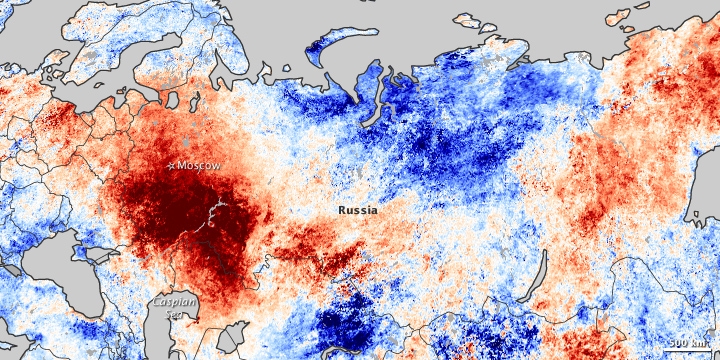 This map shows how much temperatures over Russia varied from normal between July 20-17, 2010, with redder colors showing much warmer than normal colors and blue cooler than normal. The strong concentration of deep red over eastern Russia reflects the weeks-long heat wave that gripped the region that summer.
Credit: NASA

As with other extreme weather events, particularly heat waves, the role that climate change may have played was a major topic of discussion that summer. The new study, detailed in the March 13 issue of the journal Science, suggests that the persistent patterns that drove this and other prolonged heat waves in recent years may have their roots in the the rapid warming of the Arctic. It has linked that warming to a decline in the intensity and duration of storms over North America, Europe and Asia, which allows for the intense build-up of heat.

The heat that blanketed western Russia in 2010 fueled drought and wildfires, resulted in substantial crop losses and contributed to thousands of deaths. It was the result of a tenacious atmospheric pattern that kept storms at bay with persistent, heat-trapping high pressure.

This study is the latest in a growing body of research that suggests dwindling sea ice and snow cover in the polar regions may be altering the weather over the continents of the Northern Hemisphere. This potential link has received much attention and fueled more research in recent years, although there are many climate scientists who remain unconvinced of the connection.

Some researchers suspect Arctic warming influences weather in the mid-latitudes because as the pole heats rapidly, the temperature difference between it and the equator is shrinking. That difference, or gradient, is what drives the jet stream, the fast-moving river of air high in the atmosphere that guides our weather.

When the gradient from pole to equator is large, the jet stream is stronger, sending storms zipping along its path; when the gradient lessens, weather systems are more sluggish and unchanging.

Previous studies about the effect of Arctic warming on the jet stream have focused on its larger fluctuations — the peaks and troughs like the ones that have stayed stuck in place over the U.S. this winter. They have also concentrated on the effects on weather during winter, when the Arctic warming signal is strongest.

In a departure, this study looked at the smaller waves within the jet.

“The small waves are like ripples that travel along the path of the main jet stream, through the large waves. They are what create individual weather systems, like high pressure cells and storms,” Rutgers University climate researcher Jennifer Francis, who reviewed the new study, said in an email. In the example of this winter, the nor’easters that pummeled the eastern U.S. came from smaller waves while the larger trough was in place.

And while Arctic warming may be clearest in the winter, the biggest difference in the pole-to-equator temperature gradient is seen in the summer, study author Dim Coumou of the Potsdam Institute for Climate Impact Research in Germany, said. 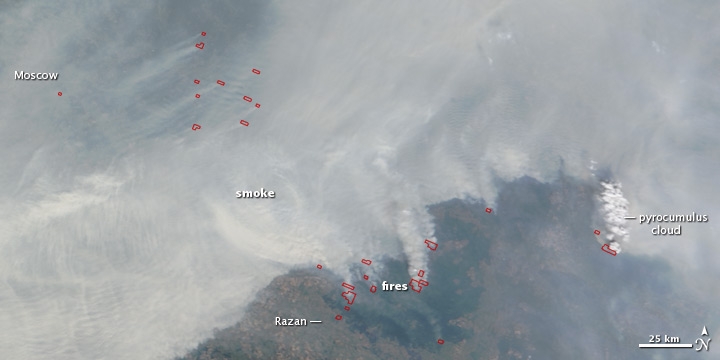 Smoke from wildfires and pyrocumulus clouds around Moscow during August 2010. The wildfires were fueled by the intense heat wave that summer.
Credit: NASA

Coumou and his co-authors analyzed atmospheric data from 1979-2013, covering the satellite era, which has produced the most robust data. They found that winds in the upper atmosphere had weakened in the summer and the energy, or intensity, of summer storm systems had declined. The drop was “quite pronounced,” Coumou said. That means that the storms moved more slowly, were weaker, or some combination of the two.

“When these small waves get weaker in summer, they tend to be associated with more stagnant weather conditions, particularly heat waves,” Francis said.

What Coumou and his colleagues saw in the data from the last few decades fits with what climate models also suggest will be the case for summer storms in the future.

“You see a really robust signal in the models in summer,” Coumou said.

But not everyone is convinced by the connection. James Screen, a climate researcher at the University of Exeter, said in an email that while the findings are consistent with model projections and look more robust than the studies linking warming to the larger fluctuations of the jet stream, “I'd be cautious pinning the blame on Arctic warming.”

Screen said that other atmospheric factors, including local temperature differences, were also important in determining the intensity of storms and that it wasn’t completely clear what’s been at work in the observed decline.

“There is still … uncertainty about these potential linkages and lots of contrasting hypotheses,” he said.

Coumou is one of many researchers pursuing the idea and expects to further explore the summer changes. But for now he said it’s clear that the weakened jet favors persistent weather which can reduce the day-to-day changes and lead to the kinds of heat events that baked Moscow in the summer of 2010.

“I think that’s the most important message from this study,” he said.