Carbon capture and storage, or CCS, is costly and complex, but technology is being developed that could make it happen on a broad scale, scientists say.

A team of scientists from California, Switzerland and China think they have developed a technology using a special “slurry” that will make CCS more efficient and cost-effective, they wrote in a study published Thursday in Nature Communications and led by Berend Smit, director of the Energy Center at Ecole Polytechnique Fédérale de Lausanne in Switzerland. 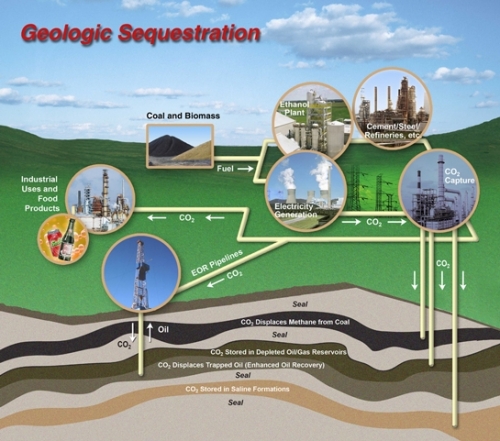 Capturing carbon usually happens in one of two ways. Most often, liquids are used to absorb the carbon dioxide, but the process is expensive and extremely energy intensive because the liquid has to be boiled as part of the process.

A less expensive process uses a solid powder that will bond to carbon dioxide at a power plant. That powder has to be transported to a site to be stored, which can be an engineering challenge, the study says.

A more effective solution is a mixture of a solid and a liquid using chemicals that could more easily absorb the CO2 than the solid powder and liquids used most commonly today, the study says.

A slurry couples the low-cost and efficiency of the powder with the benefits of the liquid method of capturing carbon without requiring large amounts of energy, the study says.

“Pumping slurry is much easier than transporting a pile of baby powder,” Smit said.

Once the slurry captures the CO2 from the flue gas of a coal-fired power plant, the CO2 can be removed from the slurry itself and then stored underground or used for a method of hydraulic fracturing an oil and gas well using CO2 instead of water and other chemicals, he said.

Then, the slurry is recycled, he added.

It will likely be at least five years before the slurry can be used for CCS at a power plant, though, Smit said.

“This article is proof of principle,” Smit said. “We have not yet started any systematic research to optimize the technology.”

Peter Kelemen, an earth and environmental sciences professor at Columbia University’s Lamont-Doherty Earth Observatory in Palisades, N.Y., said the development of the slurry as a new CCS technology is very promising.

“That said, people do need to figure out where to put the captured CO2,” he said, adding that there have been very few successful large carbon storage experiments worldwide and there has been very little funding for basic research on the long-term effects of underground CO2 storage.

However, on Thursday Canada fired up the world’s first commercial-scale coal-fired power plant equipped with CCS technology. The $1.3 billion plant, operated by Saskatchewan’s provincial power provider, is slated to cut its CO2 emissions by 90 percent compared to a comparable coal-fired power plant and will sell its captured CO2 to the oil and gas industry.

It’s unclear if coal-fired power plants using CCS on such a scale will be feasible everywhere.

“It remains the case that a carbon tax of some kind would be necessary to stimulate large-scale implementation of CCS technology, at least until production of oil and gas naturally becomes much more expensive due to increasingly challenging and expensive extraction technology,” Kelemen, who wasn’t involved in the new study, said. “Most climate scientists would agree that ‘natural’ increases in fossil fuel cost will come too late to avoid very damaging climate change.”